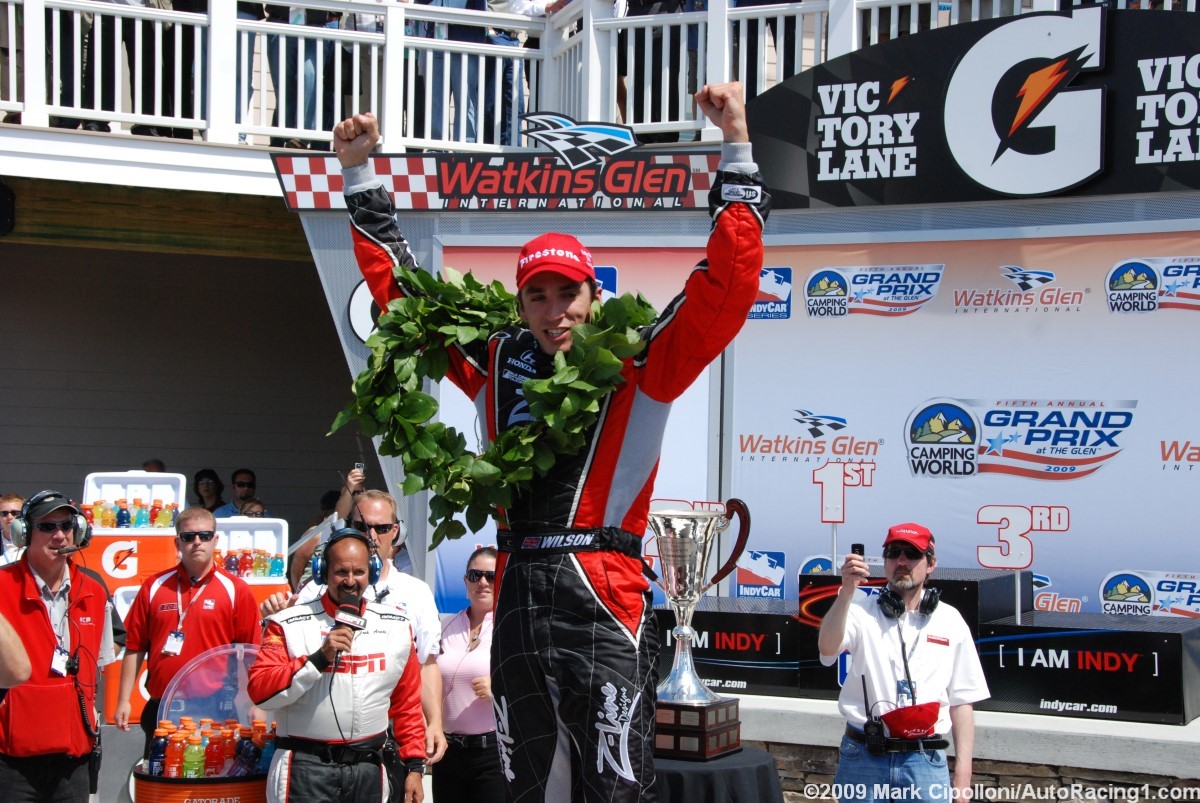 Wilson controlled the pace of the race from there on out and only lost the lead during pitstops and cautions. He did benefit from a bad break for Briscoe when the caution flew just as he dove for the pit on lap 20, but the pits had already closed when the caution flew. Briscoe was not allowed to change tires and had to come in for an extra pitstop after the pits were opened, which put some slower cars between Wilson and him.

After the 2nd round of pitstops Briscoe was able to claw his way back up to 2nd and we had a race again.

Then after Mutoh crashed on lap 53 of 60 to bring out the final caution Wilson got the jump on the green and using the benefit of his softer red tires, walked away from both Goliath teams behind him at over 1 second per lap.

It was the first IndyCar win for Dale Coyne who was elated to have finally broken his jinx after knocking on the door for 25 years.

Afterward Briscoe congratulated Dale Coyne and Justin Wilson for a job well done all weekend and stated this was his favorite road course.

When asked if he ever thought this day would come, Dale Coyne said, "We came a long way from the trailer days in 1978 and I knew we would eventually get a win, I just didn't think it would take this long."

"I wasn't nervous all weekend but when it came down to the final 2 or 3 laps I started to wonder what was going to go wrong this time, but it didn't and we won and it wasn't a fluke."

“I got here early and was down in Watkins Glen walking around. You see all those names on the pavement down there of guys who have won here and it’s pretty cool to get your name up there on the board of winning at Watkins Glen with some of the best.

“The key for me today was being able to go quick through the last two corners and carry the speed through turn one so I could open up a gap and they couldn’t draft me going up the hill. That’s what I focused on doing and my car was great through those corners."

Scott Dixon comes out of Watkins Glen with the points lead as the series now moves north of the border to Toronto, Canada. But Justin Wilson has been strong on all the street and road courses so expect them to be real contenders for two wins in a row.

JUSTIN WILSON (#18 Z-Line Designs, winner): "It was just the fact that we've just worked at this all year, and we've put a lot of effort into the road courses. To dominate like we did is fantastic. I've got to thank Dale (Coyne) for putting me into the car. I didn't think I would be driving, and here we are in Victory Lane. It feels great. I was grinning from ear to ear on the last lap. It just felt so good to do that for Dale. We've been trying to build this team up, and we're coming. This is my most important win in my career, winning with Dale and showing what we can do. It's a fantastic feeling."

DALE COYNE (Team owner, Dale Coyne Racing): (About his first victory as an open-wheel team owner): "It took too long." (About being first team other than Team Penske or Target Chip Ganassi Racing to win this season): "We've been trying hard. We've put a good group of people together. We knew Justin was a good road racer. We almost showed it at St. Pete, and we showed it here today."

RYAN BRISCOE (No. 6 Team Penske, second): "Big congrats to Dale Coyne and the whole team and Justin (Wilson). We got caught out by the yellow. We went a lap further than him in the first stint. That was going to get us the lead back, but unfortunately the yellow came, and we had to make two pit stops. That put us back. We had to work hard to come through the field. We had some great pit stops, and it was pretty exciting at the end with everybody on the softer compound. I had my hands full defending them."

SCOTT DIXON (No. 9 Target Chip Ganassi Racing, third): "It was definitely pretty tough. We lost a spot at the start when I didn't shift down enough gears and (Mario) Moraes got by us. It was a tough first stint. We had about eight to 10 laps on them from qualifying, and they wore out pretty quick. We got caught out on strategy, and we didn't have enough. Congratulations to Justin (Wilson). He drove a fantastic race and was unstoppable today. Ryan (Briscoe) and I had a great race at the end, and thanks to the Target boys we had a good day."

HELIO CASTRONEVES (No. 3 Team Penske, fourth): "The goal is not to start in the middle of the pack. We definitely had a fantastic day. I knew the car was much better than 13th. On the second pit stop, those guys (Dale Coyne Racing) definitely had red tires and made a great, clean lap. But at the end of the day, we finished fourth. If you would have told me at the beginning of the race that we would finish fourth, I would have told you, 'No way, you don't know what you're talking about,' but it turned out to be a great day."

MARCO ANDRETTI (No. 26 Team Venom Energy, fifth): "I knew I had to worry about that guy (E.J. Viso), everybody does. It was a great effort for the Venom boys today. We definitely had the pace, and I think that's definitely promising for the future. It's definitely tough. You've got to get the right yellow, which we did. We were definitely lucky for that. I knew once we were on the lead lap we were going to have enough pace for the front-runners, and I knew it was going to be interesting."

MIKE CONWAY (No. 24 Dad's Root Beer/Dreyer & Reinbold, sixth): "It was a great result for everybody. We ran strong all day. It was a shame that we couldn't quite get the result in the end. It was a case of me coming out of the box, and I lost a couple of seconds and gave me the gap to Justin Wilson, and everyone came in between us. We were running top five and saving fuel. I struggled with the balance in the end, but we still brought the Dad's Root Beer car home in sixth place. I just have to thank the Dad's Root Beer crew; they did a great job all weekend, and I'm looking forward to Toronto."

EJ VISO (No. 13 PDVSA HVM Racing, seventh): "We had a pretty good race, forgetting the first few laps. I was behind Marco (Andretti) and he was blocking me a lot, and there was a point I was trying to overtake him in Corner 8, but he just blocked me so much, we hit each other. And he had a puncture, and I broke my front wing. Other than that, we had a good car. We had very, very good pit stops. We moved many positions in the pits. And I am very proud of being able to work very hard throughout the championship to achieve, little by little, better results. Now we head to Toronto."

TONY KANAAN (No. 11 Team 7-Eleven, eighth): "I really thought the Team 7-Eleven car was going to have a better finish today. We are working really hard to improve our race results, and it's frustrating when we finish lower than we expected. I'm headed to Indy tonight to work with my engineers this week, so hopefully we can figure out what we can do to make us more competitive moving forward. I'm looking forward to getting to Toronto since it's a track I have been to many times."

ROBERT DOORNBOS (No. 06 Newman/Haas/Lanigan Racing, ninth): "The race was the best part of the weekend for us. We ran the whole day, and I saw the checkered flag. Ninth place is not what were working for here, but we're trying to get things turned around and have the luck going our way. Obviously, yesterday was a disastrous day and since it was a two-day weekend, your weekend is gone because this weekend is about track position. There are good drivers out here, and it's hard to pass. The start was nasty. This place, it's probably known that people going up the hill on cold tires is quite tricky. Somebody down the back straight lifted, and then it was a chain reaction, so the closing rate was enormous and I hit the ABC car, I think, and he hit Matos again. I asked the boys to check for front-wing damage when I went by because I had a lot of understeer. I did have damage, so it was a good call by the team to change it. That obviously messed up the race a bit but we got P9. After the problem, we had a different strategy that everybody else. The two Newman/Haas/Lanigan cars pitted early and tried to go out of sequence. I had some fast laps, and we were closing up, and then the yellow came out, which was in our favor. But the 20 car of Ed Carpenter was just not closing up and was driving really slow. I'm not allowed to overtake or I will get a penalty, so I was shouting on the radio because that was a loss of maybe 10 seconds, and that's why we had to pit again. Everybody needs to listen up in the drivers' briefing. You have to push and close up even if you want to save fuel. I did enjoy myself in the race. Let's regroup and get a mega result in Toronto."

DAN WHELDON (No. 4 National Guard Panther Racing, 10th): "Unfortunately it might have just been one of those days for the National Guard Panther Racing team. The car was very competitive; we just had a little bit of a slower pit stop on the last stop. But that happens. With our tire choice today we just got unlucky; when our red tires were on there were some sporadic yellows and when we had the blacks on it stayed green. It was just one of those days, but everybody at Panther continues to work very hard and did a good job this weekend, and we'll bounce back in Toronto."