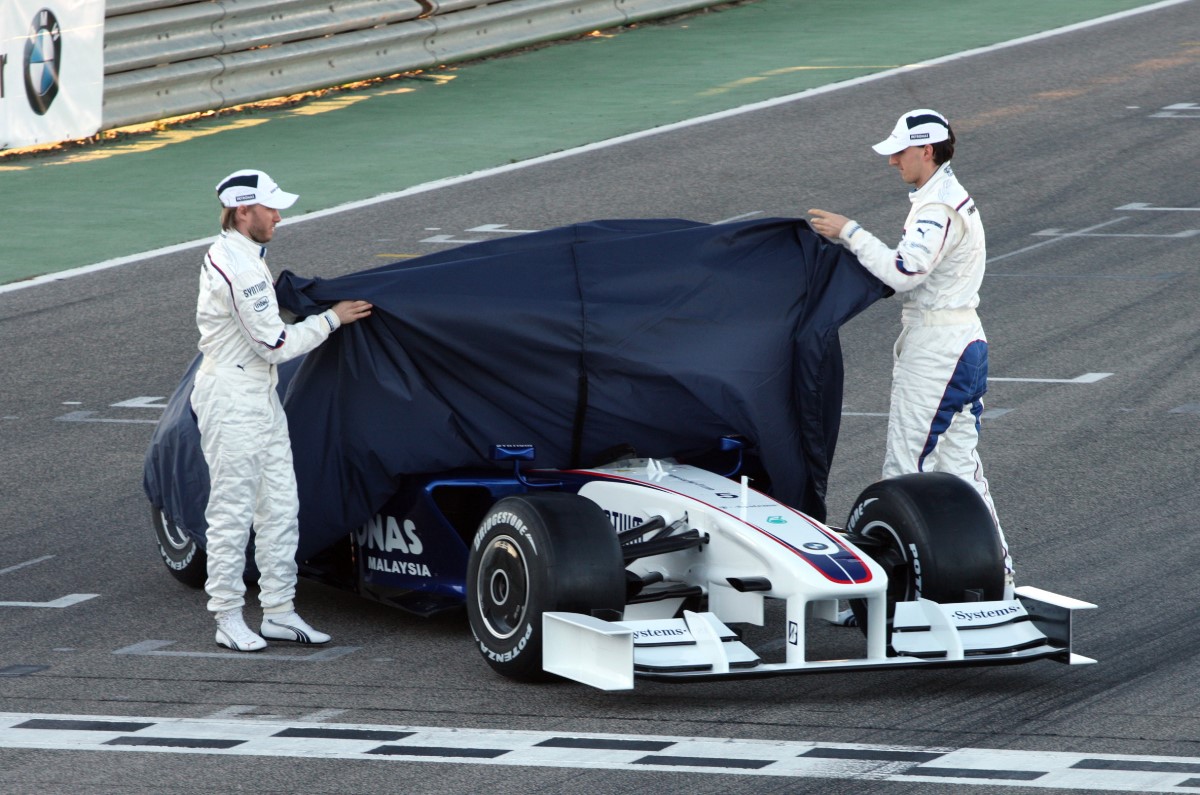 The BMW Sauber F1 Team raised the curtain on its 2009 season in Formula One in Valencia this morning. Robert Kubica (24) and Nick Heidfeld (31) unveiled the new BMW Sauber F1.09 shortly after nine o'clock. Kubica then took the car for its first lap of the southern Spanish circuit. The team goes into its fourth season with the ambitious aim of fighting for the World Championship title.

BMW Motorsport Director Mario Theissen reinforces the point: "We have set ourselves the task of further improving our performance relative to the rest of the field. The 1-2 in Canada and a total of eleven podium finishes in 2008 set an exacting standard. In 2009 we are looking to maintain our first-class reliability record while at the same time enhancing our performance levels so that we can be at the front of the pack on a consistent basis. We are aware that we are aiming extremely high. This is the final step in our development, and that's generally the hardest one to take."

Building the new car represented a massive challenge. Fundamental changes to the regulations have, in many cases, consigned the fruits of experience to the dustbin. Development work on what is a radically different race car got underway even earlier than usual. Indeed, the concept phase for the BMW Sauber F1.09 began back in February 2008. The 2009 car cuts a very different figure from all of its predecessors. Its nose is higher and much wider than before. The huge front wing consists of three elements and stretches across the full width of the car. The rear wing, on the other hand, is considerably slimmer – in line with the new regulations – and stands unusually high against the onrushing air. Intricate aerodynamic add-ons, such as air deflectors and cooling air exits, have been reduced to a minimum. Another eye- catching feature are the sidepods, which are now higher at the front.

2009 also marks the return of treadless tires (slicks) to Formula One. These will deliver increased front-end grip, which makes moving more weight to the nose of the car an attractive proposition. Counteracting this, however, is another new development which the teams have the option of introducing in the upcoming season: KERS (Kinetic Energy Recovery System). The component parts of this technology add extra weight at the rear of the car. Alongside aerodynamics and the optimum use of the slick tires, the integration of KERS represents another key challenge for the engineers. To this end, the front axle has been modified and the rear axle is a new design.

Willy Rampf is responsible for the F1.09 concept and will oversee operations at the race track in his capacity as Technical Coordinator. Managing Director of BMW Sauber AG Walter Riedl will lead the technical department at Hinwil in Switzerland and has responsibility for the development of the car.

While the chassis is the work of the Hinwil team, the KERS technology has been developed in Munich. There, Markus Duesmann (Head of Powertrain) and his team also have the job of preparing the BMW V8 engine for the extra mileage stipulated in the regulations. Each driver is allocated eight engines for the total of 17 races in 2009.

It may be all-change in terms of the engineering behind the car, but the men behind the wheel will be the same as in 2008. The BMW Sauber F1 Team will once again line up on the grid with the Pole Robert Kubica and German Nick Heidfeld as its driver pairing. And 26-year-old Austrian Christian Klien also stays with the team as test and reserve driver.

The team's race drivers both demonstrated impressive reliability in 2008. Kubica racked up the most points for the team. The Pole added his name to the list of Formula One race winners in Canada, brought home the team's first pole position in Bahrain and also notched up three second places and three third-place finishes during the course of the season. For 2009 he is hoping "that we are as strong at the start of the season as in 2008 and that we can maintain this level of performance up to the final race."

Kubica's teammate Heidfeld, meanwhile, collected four second places and recorded the team's first two fastest race laps in 2008. Looking ahead to the new season, he says: "The team started work early on the wide range of changes. I'm confident that we're in good shape and am looking forward to the first race, when we'll see whether the balance of power has shifted at all."

The BMW Sauber F1 Team has conducted intensive preparations for 2009 as it attempts to achieve its latest ambitious aim. These have included early testing with KERS and new aero elements. "In the three years since the BMW Sauber F1 Team was formed, we have always met the goals we set ourselves and are confident that we can do so again this season," explains Theissen. However, no matter how motivated the team may be and how much development work they have behind them, gauging their progress against the competition has never been so difficult – as Theissen acknowledges: "You can plan your level of performance, but not your results."