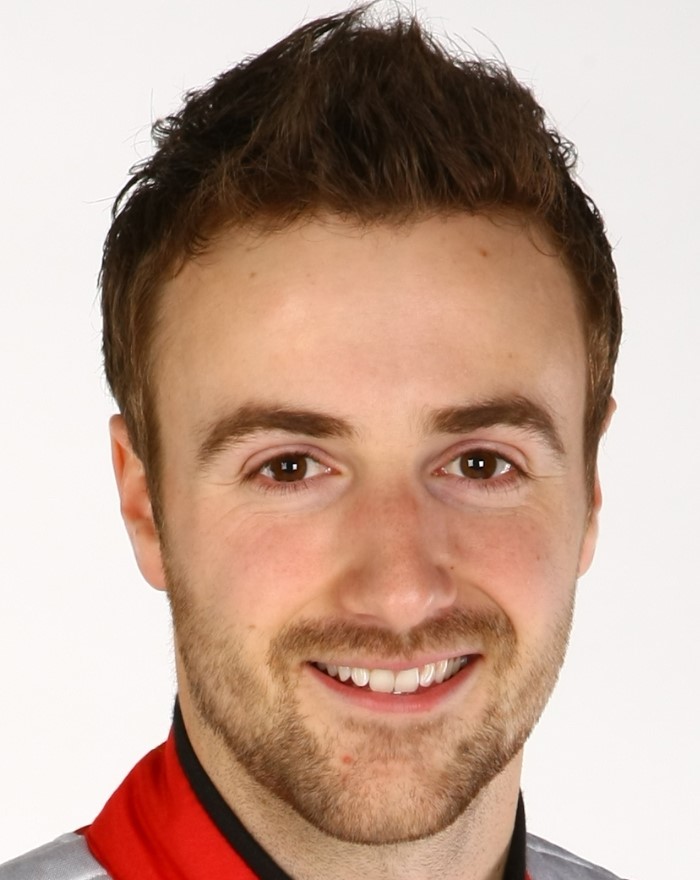 This rumor is upgraded to 'fact' today. Hinch has been hired by Andretti Autosport to drive the GO DADDY Dallara/Chevy 2012 and will be formally introduced at a press conference Wednesday at the Indianapolis Motor Speedway reports SPEED.com.

"It’s the perfect situation in every way," declared Hinch on Tuesday afternoon. "I got the most competitive ride available with the best sponsor in the series.

"It’s like Christmas, Easter, Halloween, New Year’s and Ground Hog Day all wrapped into one."

01/10/12 "I'm stepping into her heels, if you will," Hinchcliffe laughed about replacing Danica Patrick as the driver of Andretti Autosport's Go Daddy-sponsored No. 27 Chevrolet in 2012. "But that's part of what makes this deal so exciting because they did such a good job with Danica and her Go Daddy Girl image. I hope that makes me the first Go Daddy Guy."

His willingness to promote that self-deprecating humor helped land a ride with the Internet domain registrar, which sought a tech-savvy and edgy spokesman to replace Patrick.

Hinchcliffe was the 2011 IndyCar rookie of year and finished fourth three times for Newman/Haas Racing, which shut down last month. Go Daddy chief marketing officer Barb Rechterman said the on-track results enticed the company but so did "Hinchtown," the clever and colorful Internet home of a Toronto driver of British and Canadian lineage.

Hinchcliffe, 25, created it five years ago because he thought "all driver sites were boring. A lot of drivers, because of sponsors, get forced to hold back their personalities, and some really good characters get stifled because they're supposed to stick to a certain image. I'm not that, and now I've got a sponsor that's edgy and encourages that kind of personality. It just makes so much sense. We can do a lot of fun stuff together."

Fun might be the operative word for Hinchtown, which has promoted a series of off-kilter YouTube spots starring its self-proclaimed "mayor." In one of the most popular videos, Hinchcliffe takes a bath in a washing machine tailored for dogs and cats (his sister owns a pet spa). The site also has a section for fans to create positions in Hinchtown's "cabinet."

The irreverence is reflective of a driver who uses a Sharpie to scribble "stop" on his left racing shoe and "go" on the right. Hinchcliffe thought emphasizing the quirky personality was a positive in a sport where athletes wear helmets and don't earn face time unless they're excelling in major-league series.

"We've all realized you have to be 80% businessman, 20% race car driver, but you also have to stand out, because there's a lot of guys who can drive a car fast," he said. "With the sport being so sponsor-driven these days, if you want to stand out as the spokesman for a company, you have to be so much more than that. That was the concept behind Hinchtown. At first people thought I was nuts. As they years went on, the site started to get its own personality."

But there is an element of gravitas, too, with Hinchcliffe's new ride, which seemed ticketed for Dan Wheldon before the two-time Indianapolis 500 was killed last October in a crash at Las Vegas Motor Speedway.

"There's no doubt that weighed on me from the first phone call," Hinchcliffe said. "It's pretty common knowledge Dan was a shoe-in with Go Daddy and Andretti. I look at Dan Wheldon as a tremendous race car driver and a champion but also a tremendous person and human being. And if that's the guy that Go Daddy wanted, to know that I was the next guy in line and thought of along the same lines is an incredibly humbling thing, and it makes me really proud. I'm going to think about him every time I get in that car. There's no doubt that a part of me will be driving for Dan this year."

Rechterman said Go Daddy didn't consider leaving IndyCar because it liked the series' international expansion (China will make its debut this year). "It's going to reinvigorate the series," she said. "With his international flair and the social media and blogging, James will help grow into that role."

Rechterman said Go Daddy would use Hinchcliffe in a nationally televised advertising campaign as it did Patrick, whose profile was raised through a series of commercials that often pushed the envelope.

"If I have to be part of racy advertisements, that's fine," Hinchcliffe said. "That's where my personality and the edgy attitude of Go Daddy are going to fit well together. Hopefully we can make a similar splash like with Danica, but maybe appealing to a different demographic. I don't think it'll be good for their marketing if they put me in a bikini." USA Today

01/08/12 A reader writes, Dear AR1.com, How is James Hinchcliffe going to look in the GoDaddy bikini? Scotty McHugh

Dear Scotty, We don't even want to touch that one. But we could envision some really funny commercials around that topic. Commercials that would make IndyCar a household name they would be so funny. Something NASCAR would make happen because of their foresight. Mark C.

01/06/12 According to AR1.com sources, the deal is done and Hinchcliffe will drive for Andretti.

01/05/12 AutoWeek reports that team owner Michael Andretti and driver James Hinchcliffe both say they hope to soon resolve a contract with each other for the upcoming Izod IndyCar Series season.

Barring an unforeseen turn, Hinchcliffe, last year's IndyCar rookie of the year, will sign with Andretti Autosport to drive the GoDaddy-sponsored car vacated by Danica Patrick, who will race in NASCAR. Indianapolis 500 champion Dan Wheldon signed to replace Patrick on Oct. 16, but he was killed in the 15-car crash at Las Vegas Motor Speedway later that day.

Hinchcliffe is the natural next choice: outgoing and as easygoing as Wheldon was, young and hip, a rising star.

Hinchcliffe, a 25-year-old Toronto native, became a free agent at the end of the season, but he could not return to Newman-Haas Racing when the team decided it didn't have the funding to be in IndyCar this season. Newman-Haas is expected to announce a move to sports cars.

Michael Andretti has son Marco Andretti and Ryan Hunter-Reay committed to rides. A fourth car is being explored though no deal is done. Andretti said he wants a veteran to drive the Chevrolet-powered Dallara. AutoWeek We already had Hinchcliffe driving for Andretti on our 2012 IndyCar Silly Season page above.