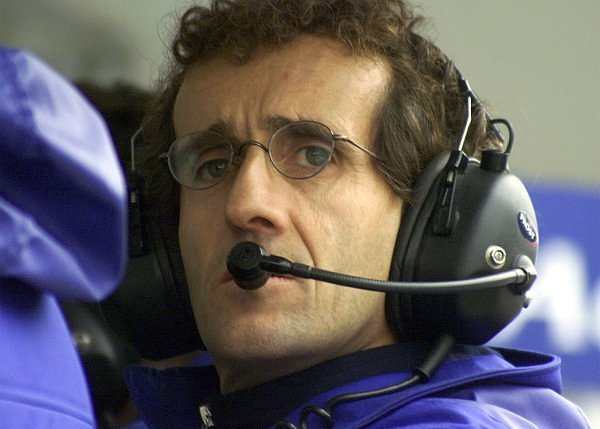 UPDATE #4 This rumor is downgraded to 'false' today. Contrary to speculation and his offer to "help" Renault, quadruple world champion Alain Prost was on Wednesday not named the French team's new formula one boss.

However, the team issued a statement announcing only a "temporary" new management structure "which will be in place from today until the end of the 2009 season".

The similarly departed Pat Symonds was Renault's executive director of engineering, but his vacated role has not been directly filled. Instead, Bell is to also be the chief technical officer.

09/23/09 (GMM) A deal with Alain Prost may be concluded imminently so that the four time world champion can travel to Singapore to act as Renault's new team principal as soon as this weekend's night race in the Asian city-state.

With Flavio Briatore ousted by the French team amid the 'crash-gate' scandal and now banned for life by the FIA, 54-year-old Prost is considered the favorite to replace the flamboyant Italian.

Reports in the French press say the signing of a contract to this effect is now imminent, however a team spokeswoman referred only to the media statement of earlier this week, which said more information would be issued "in the next few days".

"It's difficult to say," he is quoted as saying by Europe 1 radio. "Firstly it would be necessary that a proposal is made to be.

"Renault's image has been damaged, and if I can help Renault to restore its image through formula one …"

09/21/09 (GMM) The signs are growing stronger that Alain Prost is at the head of the queue to succeed Flavio Briatore as Renault's new formula one team boss.

"It remains to be seen how Renault is staying in F1 and with what strategy," the former four time world champion told the French daily Sud-Ouest.

"It depends completely on the project," Prost, 54, added. "At the moment it's difficult to talk about it. The situation is very complicated. Let's wait and see."

On the subject of Briatore, however, and the Italian's role in the 'crash-gate' scandal, Prost is adamant: team bosses should not be allowed to also manage formula one drivers.

"You need to understand that a young driver, like Piquet, is very fragile and he had a lot of pressure," Prost said in a separate interview with Britain's Mail on Sunday.

"Piquet went too far but it is something that should not happen again," he added.

Prost, although having headed his failed eponymous team until it folded in 2001, would be a logical choice for Renault in the wake of Briatore's departure.

"The whole of my career, I think I was working with integrity and F1 desperately needs to regain some morality," he said.

09/18/09 (GMM) Alain Prost believes heading Renault's F1 team would be an "honor", while Frederic Vasseur said the rumors similarly linking him with the role are "very flattering".

The French pair are just two names linked with the role as managing director and team principal of the Enstone based outfit, following the departure of long-time boss Flavio Briatore over the 'crash-gate' affair.

"It's just rumors," Prost is quoted as saying by the Italian newspaper La Stampa. "It would be an honor but no one from Renault has been in contact."

Vasseur is in collaboration with Jean Todt's son Nicolas at the leading GP2 team ART, and he is quoted as saying by Spain's AS that the reports mentioning his name are "very flattering".

09/13/09 (GMM) Alain Prost is first in line should the 'crash-gate' scandal result in Flavio Briatore's departure from formula one as Renault team boss.

The German magazine Auto Motor und Sport said Prost, the quadruple world champion and former owner and boss of an eponymous team, has been lined up by Renault should it need another manager for the Enstone based outfit.

David Richards was also named as a possible replacement for Briatore.

The scandal involving Nelson Piquet's claims that he crashed deliberately in Singapore last year has dominated the paddock banter at Monza this weekend.

Briatore has suggested Piquet and his father are simply furious about the 23-year-old Brazilian driver being sacked earlier this year, but the rumors about the deliberate crash had been circulating ever since the crash last September.

Williams co-owner Patrick Head told reporters on Sunday that a journalist informed him Piquet had confessed about the crash 15 minutes after the Singapore night race.

The Briton suggested the journalist, as well as the Renault team chiefs, should have informed the FIA at the time.

"I think if a journalist was told that by a driver he should have said 'Look, stop. If you carry on with this I will have to …'"