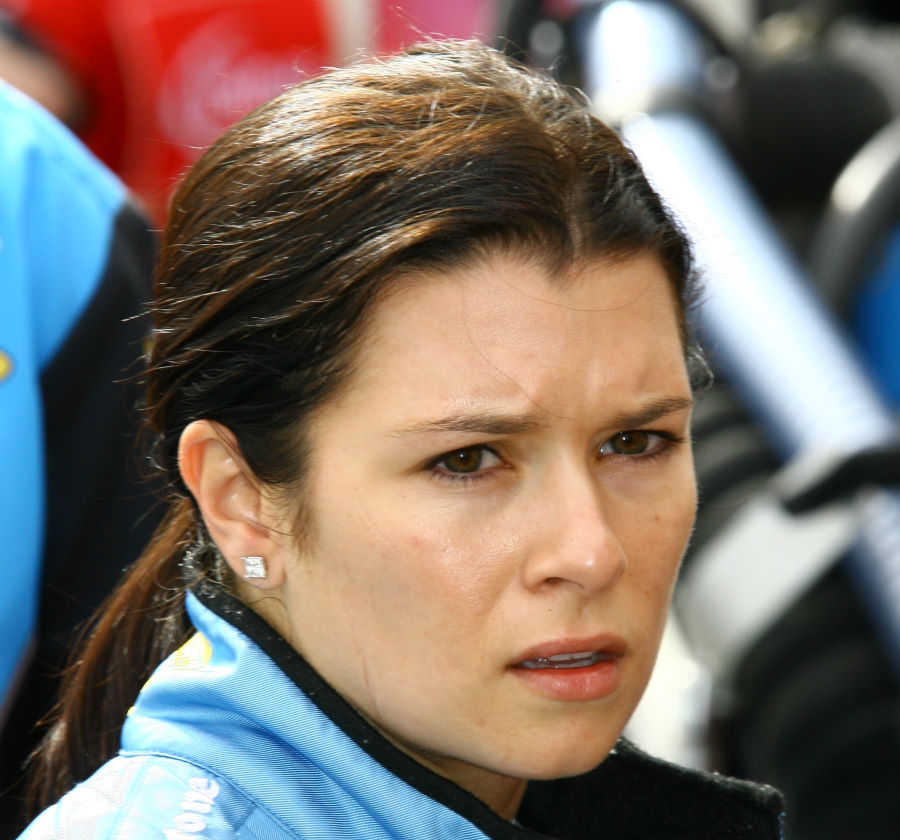 UPDATE #7 "There is no doubt she would be a welcome addition to NASCAR," said Jim Hunter, the sanctioning body's vice president for corporate communications. "She has a certain celebrity status and a charisma that we haven't seen in a while."

Hunter is taking seriously the reports that she's headed to NASCAR next year, probably with Tony Stewart as her mentor.

"I think the fact that Danica has hooked up with Tony Stewart as sort of an adviser speaks to how serious she is," Hunter said. "And I don't think Tony would be saying the things he's saying if he didn't think she has a chance to make it."

But it will be fun only after, and if, she masters full-bodied cars. Her NASCAR learning curve "all but certainly" will begin next year, according to a source — who I consider golden — close to the situation.

Her plan, according to the source, is to keep racing full-time in IndyCar next year, but also to run a significant number of Nationwide races, with some Truck and ARCA events in the mix. She has no intention of making the leap to Cup until and unless she feels comfortable that she can be competitive at that level. ESPN.com

09/07/09 A potential 2010 hybrid stock car/open-wheel schedule for Danica Patrick is becoming clearer. Although sources insist Patrick's primary concentration will remain on driving the No. 7 Honda for Michael Andretti's IndyCar Series team, she could be preparing for an ARCA/Nationwide Series debut during Daytona Speedweeks 2010, which would serve as a springboard to a likely switch to NASCAR in the future.

"I don't think she has some misguided idea that it's going to be easy doing it. She wants to do it the right way. She has the intentions to do everything right."

On top of a full IndyCar Series season and the two proposed events at Daytona, Patrick's schedule would also include one or two midseason stock car races and a full-immersion program of Nationwide and possibly Camping World Truck Series races following the October 2 IndyCar Series season finale.

09/06/09 Danica Patrick will "all but certainly" be in NASCAR in 2010, but won't give up Indy car racing and will limit next year's activity to the Nationwide Series and Trucks, according to a source very close to the situation.

Tony Stewart is the "star candidate" to be her partner and mentor in NASCAR, the source said, adding that Patrick's recent visits to Stewart-Haas Racing were much more than social — that she and Stewart were discussing a deal, and are close to one.

"I can pretty much guarantee at some point she's going to be over here," Stewart told reporters Saturday at Atlanta Motor Speedway, meaning NASCAR in general and hinting at something the source confirmed and clarified.

Patrick's likeliest first stock car race would be the ARCA event at Daytona during SpeedWeeks next February.

There's no way Patrick would a) plunge immediately into the Cup level next year, or b) give up Indy car racing until she's sure she can do well in NASCAR, the source said.

"She doesn't have some misguided idea that it's going to be easy," Stewart said. "She wants to do it the right way. She has the intention of doing everything right."

Because Stewart's team has neither Nationwide cars nor trucks in its stable, a third partner will be brought into the mix, the source said — possibly Dale Earnhardt Jr.'s JR Motorsports, or, more likely, Kevin Harvick Inc., which fields both Trucks and Nationwide cars.

Patrick is close to signing a contract renewal with Andretti Green Racing for Indy cars, the source said, but it's not a done deal yet.

But clearly now, Patrick's interest in NASCAR is more than a long-suspected bargaining chip with Andretti Green.

"She's looked me straight in the eye and said, 'Hey, this is what I want to do,'" Stewart said. ESPN

09/05/09 After Danica Patrick made a second visit to his race shop earlier this week, talking with reporters at Atlanta Motor Speedway, Tony Stewart left little doubt NASCAR racing is in her future. "I know that she's serious about it. I know that's what she wants to do." The two-time Sprint Cup added, "I don't think she has some misguided idea that it's going to be easy to do it. She wants to do it the right way. She has the intentions of doing everything right and she's kind of come to us to see our opinion about how she should go about it." Stewart also made it clear, he doesn't see Patrick leaving the Indy Racing League in the short term, "I think she wants to know how to make the transition I think more than anything and she's trying to put together she IRL deal and try to transition that into NASCAR. So, I think she's trying to do it the right way. She's not just cutting the cord and then all of sudden jumping in a car that she's unfamiliar with. She wants to stay successful where she's at, but at the same time try to figure out a way to be able to drive and get some seat time in a car to where she can start learning to where when she does come out that she's got her act together. I think she really wants to do it. It's just trying to figure out the time frame and what steps should she take to do it right and to show everybody that she wants to do it the right way." PRN's Garage Pass Radio Show

09/02/09 Lucky timing for several race fans who got a surprise at Stewart Hass Racing on Monday afternoon. As they witnessed Tony Stewart giving Danica Patrick a personal tour of Stewart Hass Racing. It's at least her second visit to SHR. Jayski.com

08/30/09 The IRL is taking a hands-on approach to keep Danica Patrick. Series officials have talked directly with her representatives at IMG in an effort to keep racing's glamour girl with the IRL and prevent a jump to NASCAR after this season. "We think it's very important," said Terry Angstadt, president of the IRL's commercial division. "We have worked hard and closely with IMG to hopefully give them confidence in the future of our series and her role in the future of our series. Those conversations have gone very well. I think we're looking pretty good. … We feel good about it. We hope it's all going to come together." Patrick's three-year contract with Andretti Green Racing expires at the end of the season, and although she has indicated she plans to stay put, she sidestepped questions about her future before the race at Chicagoland Speedway. Associated Press/ESPN.com

08/23/09 This rumor is upgraded to 'strong' today. Patrick told SI.com, in an exclusive on Friday that she was leaning strongly toward remaining in the IndyCar Series now that Michael Andretti is in the process of taking full control of ownership at Andretti Green Racing (AGR).

"Things are going well and we are definitely moving forward so that is good," Patrick said. "We are getting our stuff together for a new contract. This team is a great team and has won a heck of a lot of races so there is no reason that we can't win a lot more. Everyone works so hard and it is led by Michael Andretti. He has so much passion for this sport and says if we need to do something to go faster; let's do it. That's a good leader.

"We are getting it narrowed down but there is no paperwork yet. I think the job my agents do will be so thorough on the front end there won't be that much to do."

"The devil you know is better than the devil you don't know," Patrick said. "Every team has its pitfalls and people that are difficult with different ways of doing things. I just like some of the changes that are being made here with this team and that is good for me.

"Other than Ganassi there is Penske but they have more drivers than they do cars. Before Will Power got hurt today he was kicking a lot of butt and was showing these guys Penske should add a third car. But other than AGR and Ganassi, those are the two teams that you want to go to."

"We had some conversations not long ago about some of his thoughts and where he wants to go with things," Patrick said. "That meant a lot to me. If you want the same results, keep doing what you are doing. He didn't want to do that and that's a good thing. We really haven't shown that well this year and we want to get back on top where we should be."

"Mike [Andretti] has become more involved this year and let's face it — he is in my pit box every race weekend," Patrick said. "He is getting into the business side of things and incorporating what he has learned as a driver."

"I spent the last week with the folks at Boost Mobile and sat next to the president — we've talked a lot about when we get this deal done to come up with some cool, new concepts for next year," Patrick said. "Any time people are talking about the future it's implied that you're in it. Everybody seems pretty happy at Motorola and Boost Mobile. It has been a really good relationship."

"I think within the next couple of years in my career that might be something I would consider [NASCAR] but right now that would be a lot on my plate," Patrick said.

"Whatever fits well for her is the biggest thing," said IndyCar Series points leader Scott Dixon. "She looked around a fair bit and decided to stay where she is. I think it is fantastic that she decided to stay here rather than do something else. It's better for the series to have her in it than for her to leave. I think the IRL is heading in the right direction and keeping her is very important."

"I'm not the only show here — that's for darn sure," Patrick said. "There are a lot of great personalities. I wish the other driver's sponsors would put them on the map more than they do. Fans believe what they see. If they are in their local 7-Eleven store, they are famous and you pay more attention when they are in an interview.

"The League has always been real nice to me. The only thing I'm not happy about is the schedule because sometimes it seems like we are getting kicked out of joints. But I've been in this since the beginning and hopefully we can start taking strides forward."

"Getting close," he said of negotiations. "We've been back and forth a lot, but they want it and we want it. We're just going through the particulars right now. I'm happy with the way things are going."

An announcement could come as early as next week. Her car's sponsor, Motorola, is based in Schaumburg, Ill., near Chicagoland Speedway, site of the Aug. 29 race. Patrick's three-year contract expires at the end of the season, which has four races left. Indianapolis Star