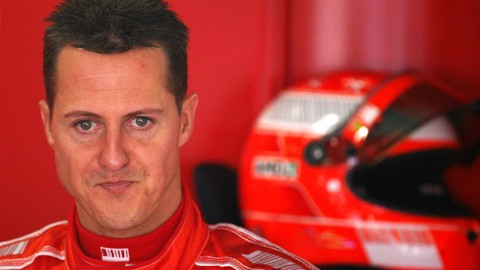 The statement said that Schumacher was 'ready' to make his F1 return, and would undertake a training program over the next few days to ensure he was up to full fitness for an F1 race.

"The most important thing first: thank God, all news concerning Felipe is positive. I wish him all the best again," said Schumacher.

"I was meeting this afternoon with Stefano Domenicali and Luca di Montezemolo, and together we decided that I will prepare myself to take the place of Felipe.

"Though it is true that the chapter of Formula 1 has been completely closed for me for a long time, it is also true that for loyalty reasons to the team I cannot ignore that unfortunate situation. But as the competitor I am, I also very much look forward to facing this challenge."

07/28/09 (GMM) News about a possible comeback for Michael Schumacher is speeding as quickly as Ferrari's formula one car down a long Monza straight.

Having said already on Tuesday that the prospect of seeing the seven time world champion in injured Felipe Massa's car at Valencia next month can be ruled out definitively, Schumacher's manager Willi Weber has admitted a return later in 2009 remains a possibility.

"I have excluded a comeback in Valencia. With regards to Spa and Monza, I would not like to express myself," Weber is quoted as saying by Auto Bild Motorsport.

It is also reported that 40-year-old German's reported neck injuries, sustained in a motorcycle testing crash earlier this year, would not be an obstacle to a Schumacher return.

It is believed Schumacher was considering contesting the IDM (German superbike) race in Holland late in August.

As for the longer-term future of the F60 raced until Hungary by Brazilian 28-year-old Massa, team boss Stefano Domenicali on Tuesday left no doubt when he said "that's his (Felipe's) car."

07/28/09 (GMM) Comments by Michael Schumacher's official spokesperson caused a stir on Tuesday, but both his manager and the seven time world champion himself insist he will not be stepping into injured Felipe Massa's Ferrari cockpit.

Spokeswoman Sabine Kehm told the BBC that the 40-year-old German "will consider" replacing his Brazilian friend, even though talks with the Italian team have not taken place yet.

But Schumacher's manager Weber actually met this week with Schumacher in Geneva, and afterwards told both Britain's Daily Mail and the German news agency SID that a comeback can be ruled out.

"Whoever sits in the car at the next race in Valencia, it will not be Michael Schumacher. I am not 100 per cent sure; I am 200 per cent sure," he said.

And Schumacher himself told his favorite German magazine Bunte: "It does not make sense to talk about offers. My decision (to retire in 2006) stands."

It seems Ferrari's reserve driver Marc Gene is the first in line for Massa's seat, and the Spaniard is scheduled to test the F60 in a straight-line at the Vairano circuit on Wednesday.

07/28/09 (GMM) The meeting might not be related to formula one, but it is worth noting that on Monday Willi Weber, Michael Schumacher's manager, travelled from Budapest to Geneva to meet with the retired seven time world champion.

It has been widely rumored, and not denied by the Ferrari team, that the 40-year-old German might be asked to substitute at forthcoming races for his injured friend and former teammate Felipe Massa.

It is believed the Weber/Schumacher meeting may also have been to discuss the possible prolongation of his contract as a Ferrari advisor.

[Editor's Note: Michael Schumacher is the man for the job. He is a red-blooded Ferrari god to the Tifosi.]

07/27/09 (GMM) Stefano Domenicali on Monday refused to rule out the possibility that Michael Schumacher may return to replace Felipe Massa at forthcoming grands prix.

"It would be wrong to say yes or no at this stage," the Ferrari team boss told the Der Tagesspiegel newspaper.

With the Maranello based team minimally needing to fill the injured Massa's cockpit for the next several grands prix, the Italian press on Sunday piled pressure on Ferrari to bring its most successful driver out of retirement.

Schumacher's spokeswoman Sabine Kehm insisted the 40-year-old is not due to make any statements in the next few days, but press sources indicate the German has not personally ruled out making a temporary comeback.

Corriere della Sera, however, noted that Schumacher's fitness still has not returned to 100 per cent following his motorcycle testing crash some months ago.

The seven time world champion also made no mention of the possibility when he posted a message on his official website wishing Massa a speedy recovery.

Other names mentioned for Massa's drive include Nico Hulkenberg, who is handled by Schumacher's manager Willi Weber, as well as Fernando Alonso, Sebastien Bourdais and Nelson Piquet.

Italy's Corriere dello Sport also mentioned Mirko Bortolotti, the teenaged reigning Italian F3 champion who over the past winter broke the F1 record during his maiden test at Fiorano.

"We are going to decide without pressure," said Ferrari president Luca di Montezemolo as he visited Massa in a Budapest hospital. "When we make our decision, it will be a good one."

Domenicali added: "We are going to think about it this week."

07/26/09 (GMM) Having already said the scenario was unlikely, Michael Schumacher's manager has now categorically ruled out an imminent return to formula one for the retired champion.

The 40-year-old has been linked with injured Felipe Massa's Ferrari seat for the forthcoming European grand prix and beyond, and former triple world champion Niki Lauda for one would like to see it happen.

"Who else?" the great Austrian said at the Hungaroring on Sunday. "There is nobody available anywhere near Michael's performance."

"What do you want to do with Bourdais? I can drive (rather than him)," Lauda said.

"Honestly. He is a waste of time — there is no way Ferrari would even consider him when he couldn't perform in a Toro Rosso against (Sebastien) Buemi."

However, as Schumacher issued a message of best wishes for his friend and former teammate Massa on Sunday, the German's manager put a stop to the rising speculation.

"That Michael is going to make a comeback is ruled out," Willi Weber told Germany's Bild newspaper.

The newspaper, raising the possibility that under-fire Renault driver Nelson Piquet might be another possibility, added that Schumacher no longer possesses a formula one superlicense.

Ferrari spokesman Luca Colajanni said in Hungary: "For that sort of thing (speculation) it is much too early."

07/26/09 (GMM) Speculation as to who will replace the recovering Felipe Massa if he needs to sit out further races has already begun.

The wildest rumor so far is that his friend Michael Schumacher, who won five world championships with Maranello based Ferrari until his retirement in 2006, is a candidate.

"I heard that on Saturday evening," his manager Willi Weber, who now handles the career of GP2 driver and Williams tester, Nico Hulkenberg, told the SID news agency in Budapest.

"That's only speculation and I don't see it happening," the German added.

"Ferrari already has two very good spare drivers who actually do little else than wait for an opportunity to go into the cockpit if one becomes free," Weber explained.

He is referring to test drivers Luca Badoer and Marc Gene, who between them have contested nearly 100 grands prix. The latter, a 35-year-old Spaniard, was in Peugeot's winning Le Mans team last month.

Gene is also present in Hungary as Ferrari's reserve driver.

However, in 1999 when Schumacher broke his leg, Ferrari overlooked its reserve driver Badoer and plumped instead for the Finn Mika Salo as the German's replacement.

The 30-year-old is also managed by Massa's manager, Nicolas Todt.

1997 world champion Jacques Villeneuve, whose father Gilles drove for Ferrari until his death in 1982, is also on the prowl for a drive.