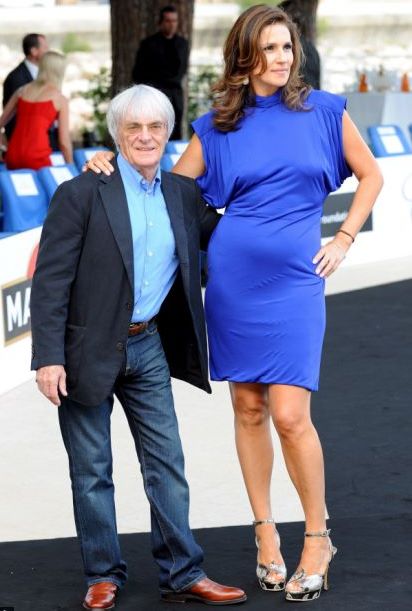 Celebrating a divorce has become fashionable, but not many ex-wives are able to celebrate it with quite the flourish of the former Mrs. Bernie Ecclestone.

I can reveal that the statuesque Slavica is marking her new freedom by taking delivery of a Â£36.5 million private jet. And, of course, it is bigger than Bernie's.

Slavica, 51, who despite her control of the family's Â£2.4bn fortune lives in a relatively modest two-bedroom flat in Knightsbridge, has taken possession of a top-of-the-range Gulfstream G550 which boasts every conceivable luxury and is able to fly from London to Singapore without refueling.

'More importantly, it is twice the size of her ex-husband's jet,' says a friend. 'It has two bathrooms and two bedrooms. She is always travelling to faraway places like India, Morocco and South America, and she supports an orphanage in Brazil.'

But the purchase is not the only thing on her mind. 'Frankly, she is not very happy with him at the moment,' the friend reveals.

Slavica's displeasure with Ecclestone centers, I am told, on reports from her native Croatia this week that he has been enjoying himself on holiday there with a young woman.

'She doesn't care about the new woman, but she does care that he is disporting himself on her home territory,' the friend tells me.

'And while he has been swanning around on his yacht in Split, their daughter, Tamara [aged 24], flew to America because of health problems and has been undergoing a series of tests at the Mayo Clinic.'

Friends say Slavica is also unhappy with Bernie's unfortunate remarks about Hitler, which caused such a storm in Britain and reverberated in Germany, where their younger daughter Petra, 21, is hoping to launch her new men's fashion label, called Form, in Berlin.

'Needless to say, the launch was postponed because of the furor, and Petra was very upset,' I am told.

Mrs. Ecclestone is also irritated by reports Bernie had bought Petra's new Â£25million Eaton Square home. 'It wasn't him, it was Slavica who bought the house,' the friend reveals.

Ecclestone, who is still on his 200ft yacht in Split before flying to Hungary for Sunday's Grand Prix, tells me: 'I haven't got a new woman in my life. I was spotted out at a market buying flowers with three young ladies, but none of them are mine – they are all wives of business friends of mine.

'Anyway, you wouldn't find me buying flowers for a girlfriend from a street market. That's not very romantic, is it?' Mail Online