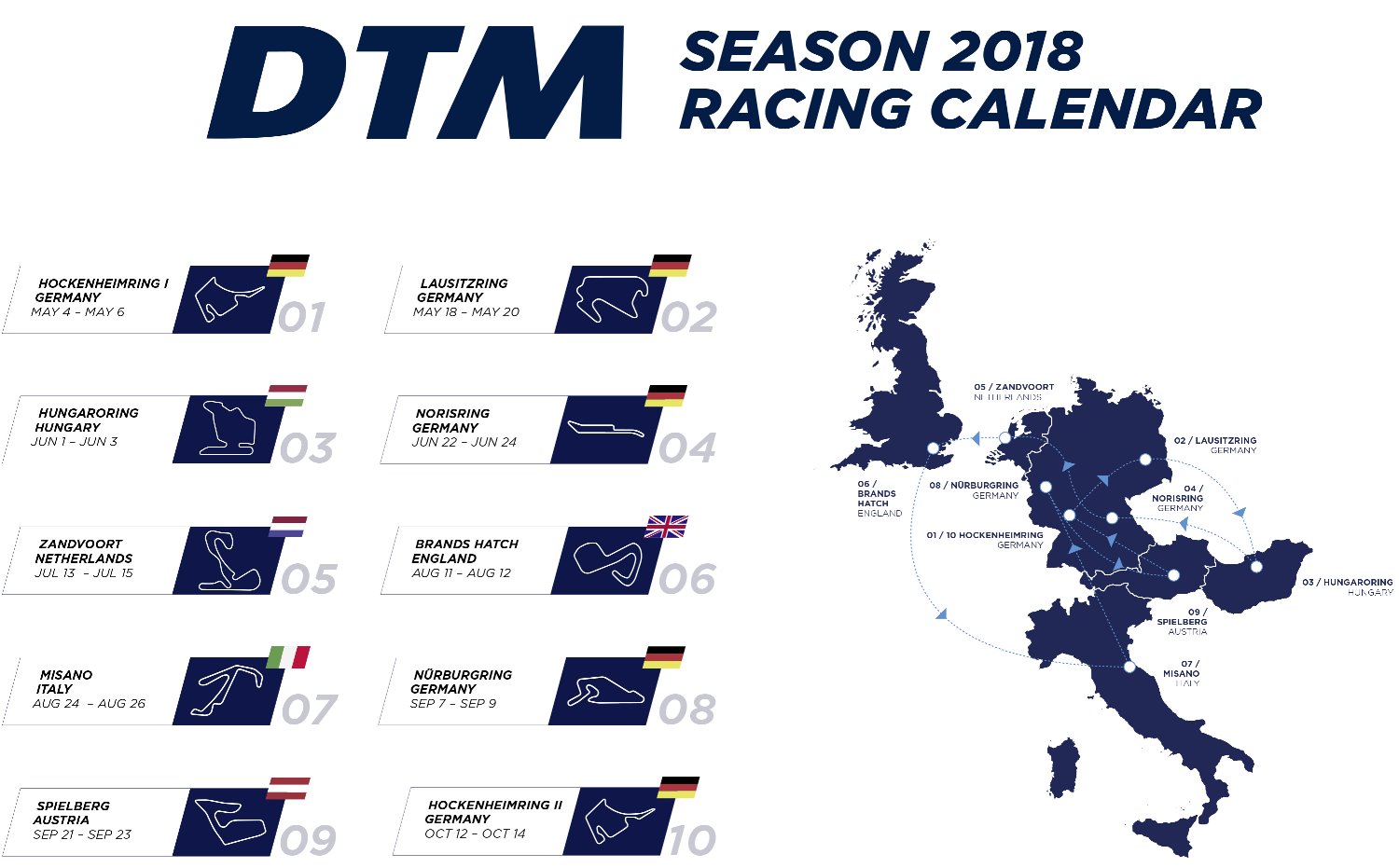 The DTM enthusiasts may look forward to an additional race weekend and two new venues on the 2018 DTM calendar. The popular touring-car series ups the ante with a calendar that comprises 10 instead of 9 race meetings. Just as it was the case in recent years each race weekend features two races. Hockenheim traditionally stages the season kick-off (04th to 06th May) and the season finale (12th to 14th October). New on the calendar are the circuits of Brands Hatch, UK, (11th to 12th August) and Misano, Italy (24th to 26th August).

Misano’s 4.2-kilometer World Circuit Marco Simoncelli makes its DTM debut. The Italian seaside resort Misano is located at the Adriatic Riviera, in the Emilia-Romagna, just a few kilometers south of Rimini. The circuit was completely reconstructed in 2006/2007 into a circuit that has got what it takes to stage MotoGP races. The result was a modern, challenging driver racetrack with differing corner radii.

At Brands Hatch, south-east of London, DTM already contested eight races from 2006 to 2013 – but in those years, the races were held at the short 1.97-kilometer Indy layout. The circuit was built back in 1928 for motorbike races. From 1964 to 1986 it also was the venue of 15 Formula One GPs. The tradition-rich British circuit is regarded as a true challenge for both drivers and vehicles and this applies in particular to the long layout (GP circuit) DTM will race on in 2018.

In addition to Hockenheim, the German circuits Lausitzring, Norisring and Nurburgring also represent a constant on the DTM calendar and the same applies to the abroad races at the Hungaroring, Hungary, Zandvoort, Netherlands and Spielberg, Austria. The advance booking for all the races will begin in early 2018.

“Five events in Germany, five abroad – DTM is becoming somewhat more international without neglecting its German roots," says Gerhard Berger, CEO of DTM’s umbrella organisation ITR to add: “With England and Italy two important markets of the premium-car manufacturers Audi, BMW and Mercedes make their comeback on the DTM calendar. Furthermore, I’m delighted that DTM keeps on racing at the Lausitzring – even after the circuit was sold. With the new owner DEKRA, our long-term partners, we could make sure that the Eastern-German DTM enthusiasts also will be provided spectacular touring-car racing.