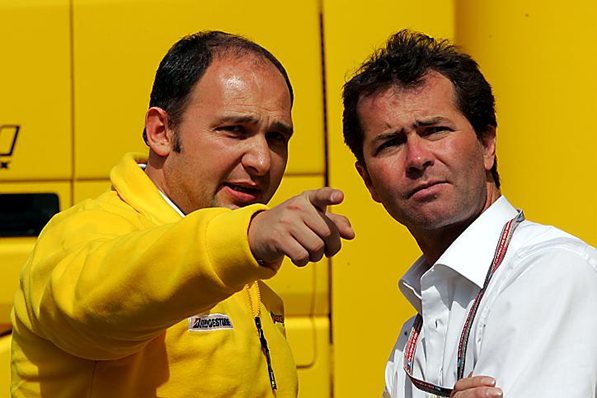 Carlin is proud to announce their move into the Verizon IndyCar Series in a full-time capacity for the 2018 season. Joining the first season INDYCAR effort at Carlin will be drivers Max Chilton and Charlie Kimball along with primary partners, international insurance brokerage, risk management and consulting services firm, Gallagher and global healthcare company, Novo Nordisk. Both Chilton and Kimball drove for the championship winning team earlier in their racing careers. The Carlin entries will be powered by the Chevrolet twin turbocharged direct injected V6 engine.

Our 2018 IndyCar Silly Season page has been updated accordingly

“We’re delighted to finally be able to announce our entry into the Verizon IndyCar Series, the result of a long-term ambition of the team," Team Principal Trevor Carlin said about the announcement. “To be joined on that journey in our debut season by brands such as Gallagher and Novo Nordisk and with drivers we already have a race winning history with in Max and Charlie, is beyond what we could have expected. By no means do we underestimate the challenge and competition that lies ahead, but I have great faith in the young and passionate team that our Team Manager Colin [Hale] and I have put together."

Chilton will return for his third season in the Verizon IndyCar Series with partner Gallagher. Chilton and Gallagher made their INDYCAR debut together in 2016 and have since recorded 33 starts, eight top-10 finishes, 66 laps led, and an impressive fourth-place finish at the 2017 101st Running of the Indianapolis 500.

“We are proud to partner with Carlin in the Verizon IndyCar Series for 2018 and look forward to the thrilling prospect of driver Max Chilton winning with our Gallagher brand prominently featured on his Chevrolet. Millions of fans around the world enjoy this sport, as do our clients and employees. It is our intent to leverage this sponsorship to showcase Gallagher’s extensive brokerage services and risk management expertise and to celebrate the values of innovation and collaboration our brokers and sales consultants deploy in creating solutions for their clients around the globe," said Christopher E. Mead, Chief Marketing Officer for Gallagher.

Kimball, who will be returning for his eighth season in the Verizon IndyCar Series, will team with Chilton in Carlin’s two-car effort. Joining him for their 10th year of partnership will be longtime sponsor Novo Nordisk. Novo Nordisk joined Kimball’s career in Indy Lights in 2009 and has been with the American driver throughout his INDYCAR career. The duo has recorded 117 starts, one win, one pole, 13 top-five finishes, and 162 laps led in the Verizon IndyCar Series.

“As we begin the 10th year of our partnership with Charlie Kimball, we are excited to continue the legacy of the Race with Insulin program to inspire people with diabetes to pursue their dreams and support them in their disease management journey," said David Moore, senior vice president, Commercial, Novo Nordisk. “We are encouraged by our new relationship with Carlin, who has a proven reputation for winning in a variety of motorsports series. We are looking forward to being part of a strong season in 2018 for Charlie, Race with Insulin and for the entire Carlin family."

Chilton’s partnership with Carlin renews a successful relationship that goes back throughout the British racer’s career. Chilton won races with Carlin in Formula 3 and Formula 2 (formerly GP2 Series) before racing in the FIA Formula 1 World Championship from 2013 – 2014. In 2015 Chilton explored racing in the U.S for the first time with a season of Indy Lights with Carlin, along with a run with a manufacturer LMP1 program at the prestigious 24 Hours of Le Mans.

“Today’s announcement brings so much joy to everyone involved in making this a reality. Carlin being the first British team to enter the Verizon IndyCar Series in the modern era is a result of a lot of hard work and ambition following the team’s move into American racing a few years ago," Chilton said speaking about the Carlin announcement. “I am super excited for 2018 as Carlin is like family to me. Having raced with them on and off since 2009 and having had my most competitive years with the team, I know we can work toward great things in INDYCAR. The Verizon IndyCar Series is exceptionally competitive, but the introduction of the new aero package will help level the playing field slightly. I know that finding the maximum in a spec series like this is where Carlin really excels. I want to say a massive thank you to Gallagher for continuing their support of me in INDYCAR. To have the opportunity to represent the more than 26,000 employees of Gallagher and a brand that focuses so heavily on teamwork and innovation has even greater relevance this year. I’m very thankful to be part of this package for 2018."

Kimball returns to Carlin after a 10-year period, following race winning success with the team in British F3 and later in the Carlin-run Victory Engineering Team in the World Series by Renault. It was in the latter series that Kimball’s season with the British team was cut short when the California native was suddenly diagnosed with type 1 diabetes in 2007.

“I’m so excited to join Carlin for the 2018 Verizon IndyCar Series season. They were a big part of launching my career when I raced in Europe and we had a lot of success together back in 2005 in the British Formula Three Championship," said Kimball on returning to Carlin. “It seems like everything fell into place at the right time to have this opportunity to work with Trevor and the whole Carlin team again. I’ve already got two years of experience working with Max as a teammate and I think our strengths and weaknesses will really complement each other as we begin this new adventure. The Verizon IndyCar Series is not just gaining a new race team, which is of course exciting, but really gaining a capable and competitive group of people that make up this team. Bringing Novo Nordisk into the fold, for our 10th consecutive year together, means a lot to me personally. They’re more than a sponsor—Novo Nordisk is a true partner, and I can’t thank them enough for their support."

Carlin has been a fixture in the motorsports industry for nearly 20 years and has been a major factor in developing some of today’s most accomplished drivers in the world. The team currently competes in the Verizon IndyCar Series, FIA Formula 2 Championship, Indy Lights Series, FIA Formula Three European Championship, EuroFormula Open, and the BRDC British F3 Championship. Overall Carlin has 24 championship titles and more than 380 victories, including wins in series as diverse as Formula 3, GP2 Series, Porsche Supercup and championship victories in Formula 4, FIA Formula 3, Indy Lights and Formula 3.5 World Series by Renault. Carlin’s UK race shop facility is located in Farnham, Surrey along with a dedicated U.S. race shop facility located in Delray Beach, Florida that serves as a base for the team’s INDYCAR and Indy Lights programs. For more information on Carlin, please visit www.carlin.co.uk.