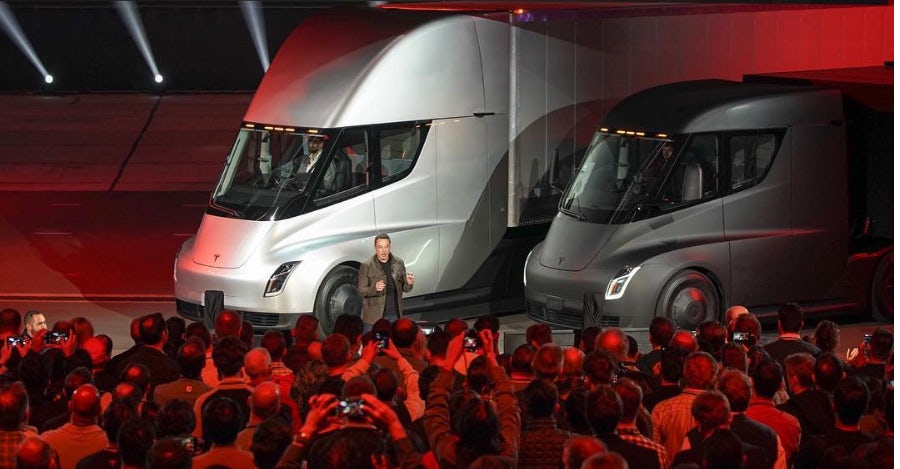 PepsiCo has reserved 100 of Tesla's new electric Semi trucks, the largest-known order of the big rig, as the maker of Mountain Dew soda and Doritos chips seeks to reduce fuel costs and fleet emissions, a company executive said on Tuesday.

Tesla Inc. has been trying to convince the trucking community that it can build an affordable electric big rig with the range and cargo capacity to compete with relatively low-cost, time-tested diesel trucks.

Early orders reflect uncertainty over how the market for electric commercial vehicles will develop. About 260,000 heavy-duty Class 8 trucks are produced in North America annually, according to FTR, an industry economics research firm.

PepsiCo's 100 trucks add to orders by more than a dozen companies such as Wal-Mart Stores Inc., fleet operator J.B. Hunt Transport Services Inc., and food service distribution company Sysco Corp. Reservations to date are at 267 Tesla trucks, according to a Reuters tally.

PepsiCo intends to deploy Tesla Semis for shipments of snack foods and beverages between manufacturing and distribution facilities and direct to retailers within the 500-mile range promised by Tesla CEO Elon Musk.

The trucks will complement PepsiCo's U.S. fleet of nearly 10,000 big rigs and are a key part of its plan to reduce greenhouse gas emissions across its supply chain by a total of at least 20 percent by 2030, said Mike O'Connell, the senior director of North American supply chain for PepsiCo subsidiary Frito-Lay.

PepsiCo is analyzing what routes are best for its Tesla trucks in North America but sees a wide range of uses for lighter loads like snacks or shorter shipments of heavier beverages, O'Connell said. Autonews/Reuters