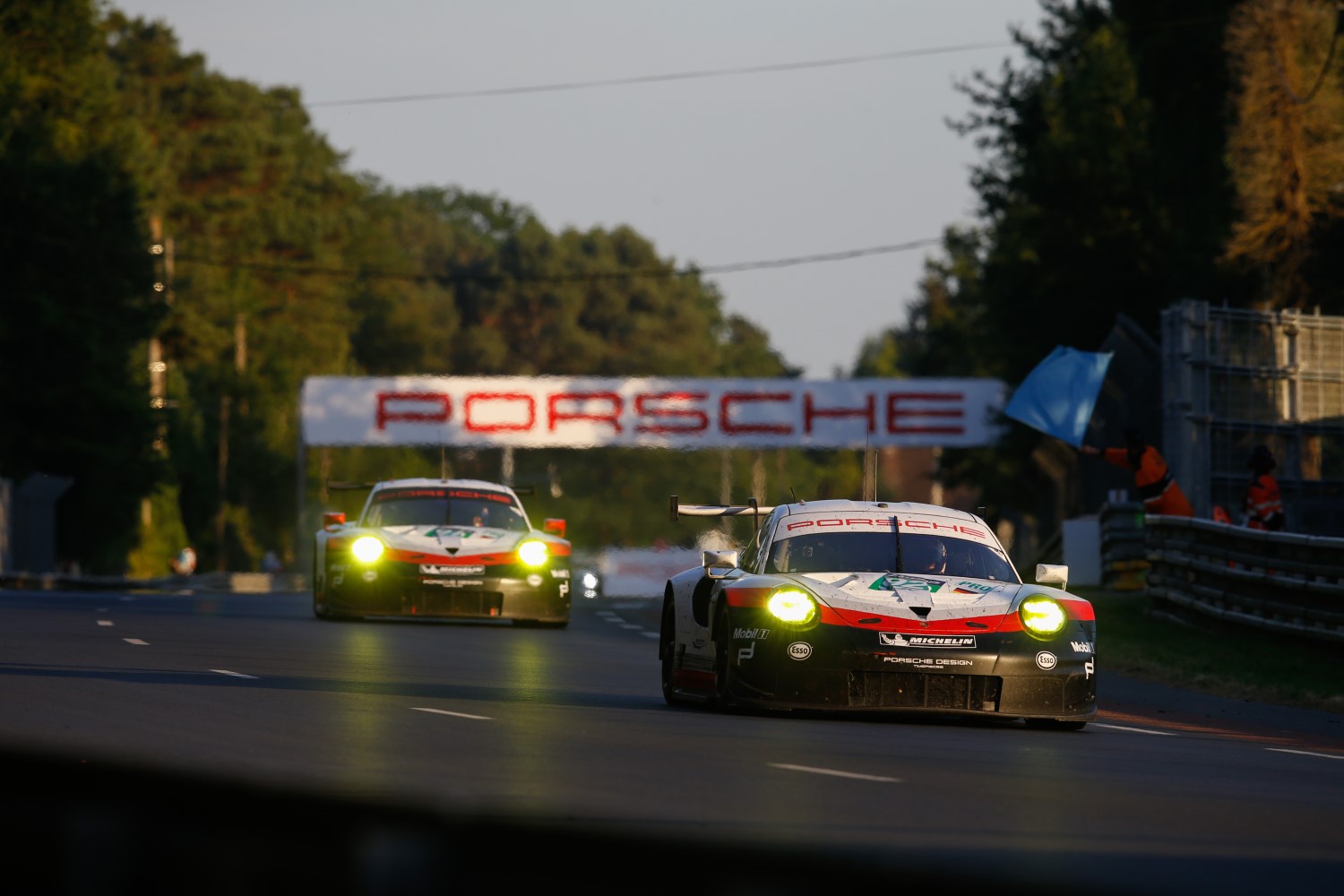 Stuttgart. Porsche has paid tribute to the worldwide achievements of teams and drivers during the 2017 season at its “Night of Champions" motorsport gala in Weissach. On this occasion, the huge expansion of its worldwide GT program was announced.

Largest ever GT factory mission at Le Mans
Porsche plans to campaign four factory vehicles at the 86th running of the Le Mans 24 Hours. The two Porsche GT Teams from the FIA WEC and the IMSA WeatherTech Championship each field two ca. 510 hp GT racers from Weissach. The cockpit of the #91 car is shared by Gianmaria Bruni, Richard Lietz and Frederic Makowiecki.

The number 92 vehicle is manned by Kevin Estre, Michael Christensen and Laurens Vanthoor. Patrick Pilet, Nick Tandy and Earl Bamber are expected to drive the number 93 car, with the #94 Porsche 911 RSR earmarked for Timo Bernhard, Romain Dumas and Sven Muller. With Bamber, Bernhard, Dumas and Tandy, a total of four outright Le Mans winners will compete as part of the Porsche works squad.

Porsche again fights for the world championship in 2018
In the 2018/2019 season, Porsche again sends its factory Porsche GT Team to contest the GTE-Pro class of the FIA World Endurance Championship (WEC). In the #91 Porsche 911 RSR, Gianmaria Bruni and Richard Lietz fight for the world championship, with Michael Christensen and Kevin Estre manning the #92 vehicle. In the GTE-Am class, a number of customer teams have applied for a starting spot with the 2017-spec 911 RSR. In total, Porsche has sold seven 911 RSR to customers for the WEC, the 24 Hours of Le Mans and the European Le Mans Series.

Strong commitment in the USA
One of the most successful driver pairings in the IMSA WeatherTech Championship join forces again in 2018: Like in their 2015 championship winning year, Nick Tandy and Patrick Pilet share the cockpit of the 911 RSR with the starting number 911. In the #912 sister car, the two-time Le Mans overall winner Earl Bamber and the Intercontinental GT Challenge and Blancpain Series champion, Laurens Vanthoor, form a world-class driver duo.

911 GT3 R customer sport racer receives an upgrade
The successful 911 GT3 R customer racing model undergoes an upgrade for the 2018 GT3 season. The parts kit, which can be used to update all 2016 and 2017 models, includes amongst other things a new front lid for the optimization of thermal management and side flicks to improve the aerobalance.

Firm commitment to worldwide GT3 sport
At each round of the Intercontinental GT Challenge, Porsche lends its support to at least one local team in their 911 GT3 R pro-class campaign. The works driver trio Dirk Werner, Romain Dumas and Frederic Makowiecki will contest all races and fight for the drivers’ championship. In the Blancpain GT Series Endurance Cup, the three also share the cockpit of a 911 GT3 R. This will be fielded at all races by Manthey Racing. In many other international and national GT series such as the European Le Mans Series, the Pirelli World Challenge, the Japanese Super GT series, the IMSA WeatherTech Championship (GTD class) and the Nurburgring Long Distance Championship, Porsche supports customer teams with engineers and drivers.

Nine Porsche 911 GT3 R tackle the 24-hour race at the Nurburgring
Nine Porsche 911 GT3 R are expected to line up at the Nurburgring to contest the ADAC 24-hour race. Five vehicles will be fielded by customer teams in the pro class, with four in the amateur class. Manthey Racing campaigns two vehicles manned by factory drivers: Sharing driving duties in the #911 Porsche 911 GT3 R are Earl Bamber, Laurens Vanthoor, Kevin Estre and Patrick Pilet. Taking up the race in the #912 car are Romain Dumas, Richard Lietz, Frederic Makowiecki and Nick Tandy. A total of 13 Porsche works drivers and four Young Professionals will tackle the Eifel marathon on 12/13 May.

Porsche further expands its youth development program
In the 2018 season, a total of four top young pilots will compete around the world as Porsche Young Professionals. After their successes in Porsche’s one-make cup series, Dennis Olsen and Matt Campbell have taken the next career step. Matteo Cairoli and Mathieu Jaminet also gave convincing performances in their first season as young professionals in GT racing and will continue to receive support in 2018. The proven support scheme will be supplemented for the first time by Porsche Selected Drivers in the coming year. Porsche also provides these pilots with training, which includes fitness tests. So far, Christina Nielsen from Denmark is the first driver to be chosen. The winner of the German E-Kart Championship (DEKM), held for the first time in 2018, can also benefit from a number of training programs, which evolved in the Porsche youth development scheme. Porsche Motorsport will partner the innovative and particularly cost-effective DEKM from the very first race. The karts, capable of reaching 130 km/h, will be fielded centrally to ensure a level playing field and to prevent runaway costs.

911 GT3 Cup sets a new record
The new 911 GT3 Cup, which celebrated its premiere in the Porsche Mobil 1 Supercup, the Carrera Cup Deutschland as well as in North America in the 2017 season, will be fielded in the majority of Porsche’s 21 one-make cup series around the world in 2018. Up until spring 2018, a total of 339 units of the 485 hp one-make cup racer will roll off the assembly line at Porsche’s main facility in Stuttgart-Zuffenhausen. Never before have so many racing vehicles of one type been manufactured for one season. Hence, the Porsche 911 GT3 Cup remains the world’s top selling race car.

919 Hybrid goes on a worldwide farewell tour
The Porsche LMP Team will spend 2018 concentrating on its new mission: its successful entry into Formula E. The start takes place in season six, beginning at the end of 2019. Until then, the team will design, develop and test a complete powertrain. The first steps were already taken in 2017, with the concrete implementation of the concept taking place next year. The first test drives with the finished Formula E race car from Porsche are scheduled for early 2019. A second field of activity will be the operational implementation of a farewell tour for the three-time Le Mans winning Porsche 919 Hybrid car. Outside the events of the FIA World Endurance Championship (WEC) and thus outside the regulations of usable energy amounts, the innovative race car will be campaigned at many individual events throughout the year. A precise program will be announced early in 2018. At the end of 2018, the era of the ca. 900 hp hybrid prototype will come to a close. The 919 will then make its last trip to the Porsche Museum.

Porsche Cup: Christian Ried is the most successful private driver of 2017
This year’s winner of the Porsche Cup, the trophy for the world’s most successful private Porsche driver, goes to Christian Ried (38). The racing driver/owner of the Dempsey Proton Racing squad was awarded the coveted trophy by Dr Wolfgang Porsche, the Chairman of the Supervisory Board at Porsche AG. In addition, Ried takes home a Porsche valued at 120,000 Euro. Thanks to his successes in the FIA WEC and the European Le Mans Series, he earned 8,700 points over the past season at the wheel of the Porsche 911 RSR. Second-placed Robert Renauer, last year’s Porsche Cup recipient, can look forward to prize money totaling 30,000 Euros. For third place, Switzerland’s Daniel Allemann wins 25,000 Euro. The Porsche Cup has been awarded since 1970 and is based on an idea of Ferry Porsche.