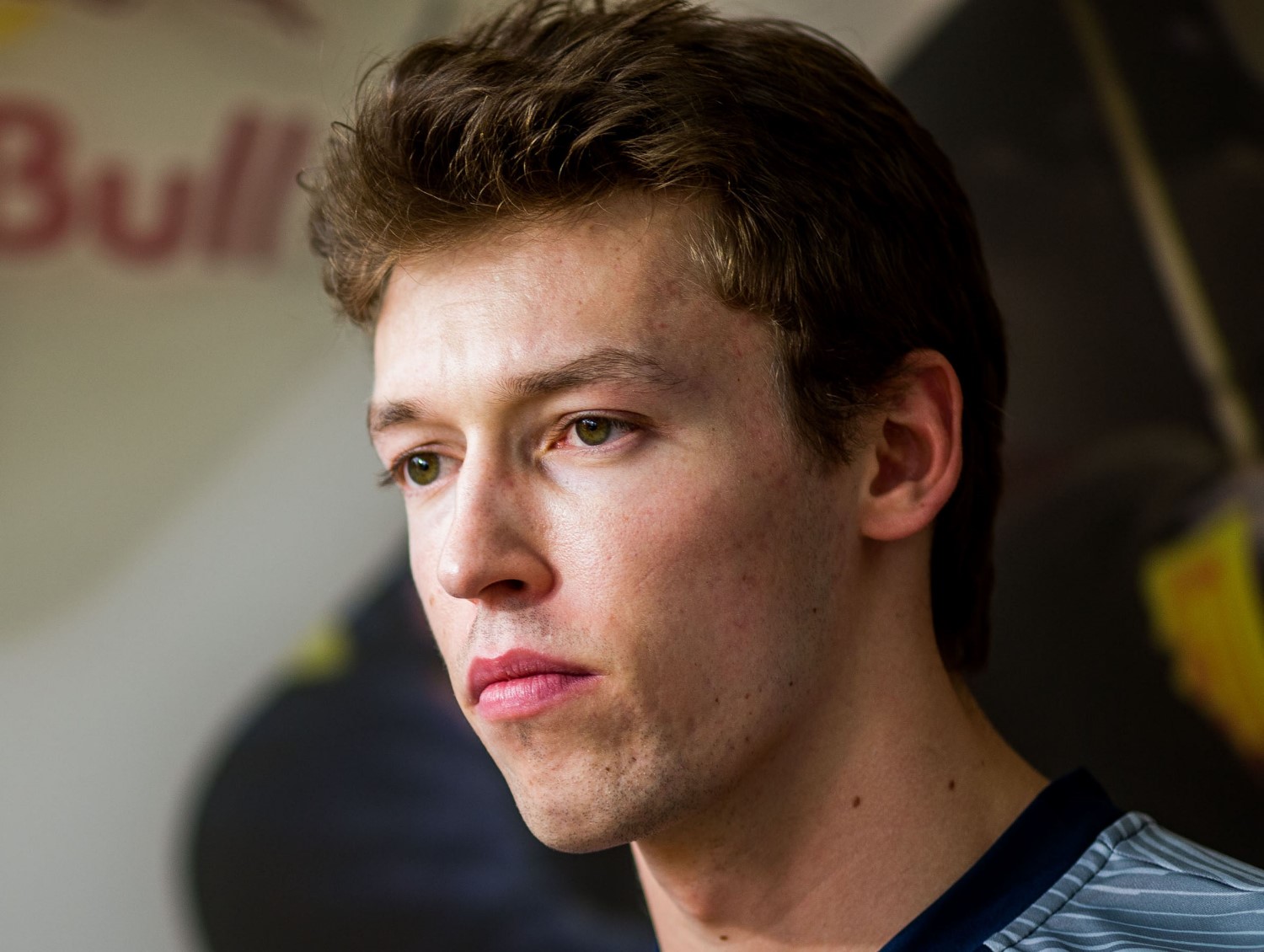 The Russian was dropped from Red Bull's F1 program, but we reported this week that he is in talks with "at least two" Formula E teams.

And now, the Autodromo di Franciacorta circuit in Italy has confirmed rumors that Kvyat, 23, will be at the "recruitment tests" on Tuesday for the European Nascar series.

(GMM) Haas appears to have closed the door completely on Antonio Giovinazzi.

Since July, the Ferrari junior driver appeared in a Haas cockpit on seven Friday mornings at grands prix.

"I cannot say how negative it was, but it was not positive. We will see what we are doing next year, but we have not talked about it yet," he added.

Italian Giovinazzi has been left out of the Sauber race lineup for 2018, even though Ferrari's other junior, Charles Leclerc, was accommodated.

Ferrari also tried to accommodate Giovinazzi at Haas for 2018, but the American team said no.

"They asked," Steiner said, "but if you don't ask you don't get what you want.

"They did not pressure us. We quickly clarified that we have two drivers next year. It was pretty straightforward."

For now, Giovinazzi has six Friday practice outings lined up with Sauber for 2018.

"We understand his desire to race but at the moment there are no places," Ferrari president Sergio Marchionne told Italy's Autosprint.

(GMM) Marcus Ericsson has admitted he had "a few nervous weeks" before he was re-signed by Sauber for 2018.

The Swede was out-scored this year by his teammate Pascal Wehrlein, who has been ousted and looks set to leave F1.

Ericsson admits that Wehrlein, the highly-rated young Mercedes driver, was "the perfect measure" for him in 2017.

However, it is believed 26-year-old Ericsson's strong links with the new Sauber ownership were enough to secure his place for next season.

"I had a few nervous weeks but of course it's nice that everything is ready now, especially with Alfa Romeo as a major sponsor and partner," he told the Swedish motoring magazine Teknikens Varld.

Ericsson, who has also raced in F1 with the now-defunct Caterham team, admitted he is relieved that Sauber looks set to have a more competitive car in 2018.

"It has been quite a tough career so far in formula one," he said. "It has been difficult to show what I can do with cars that are always at the back of the grid.

"But now with Sauber together with Alfa Romeo, it should mean that for the first time I can be much higher on the grid," Ericsson added.

He will be paired next year with Charles Leclerc, the new Formula 2 champion and a Ferrari junior driver.

"Charles Leclerc is an incredibly talented driver who really dominated F2 this year and will of course be a tough opponent for me next season," Ericsson said.

"He is also Ferrari's new super junior but I'm sure we will work well together to develop the car in the best way."

Chase Carey and David Hill "are back together again," according to John Ourand of SPORTSBUSINESS JOURNAL.

Colleagues from the "earliest days of Fox Sports," Carey, the Formula 1 CEO, tapped Hill, the former Fox Sports chair, to "breathe new life" into F1’s TV production. Hill will work with F1’s existing production crew, which produces the world feed that rights holders like ESPN will use.

"It’s business as usual; I will be telling stories," Hill said. “I’m going to be working with the guys on everything from camera angles and camera positions to graphics, music and audio. What I hope to do is to make it louder."

Hill’s plans extend beyond TV production. He also hopes to use all the data that comes from F1 cars to anchor an OTT service that will "serve as a second screen and attract more casual fans."

"Look at where everything is going," he said. "Everything is data driven. Everyone wants to get inside. There are no inner sanctums. We have to present that information in a way that’s readily accessible to someone that’s never experienced the sport." SPORTSBUSINESS JOURNAL

Berry said of how the company is "technically" a business-to-business brand, "When Frank [Williams] set up the company 40 years ago, his goal was to create an engineering company that raced cars. But we’re more than that. We’re very much a consumer brand. But one without actual consumer products."

Williams "holds a huge amount of data on a multitude of consumers, a testament to its public popularity."

In September, the team announced it had accrued a global fanbase of around 57 million people and that it was inviting 21 million of those who deem themselves "uber fans" to join a new digital, content and CRM ecosystem. The team's partnership with WPP-owned sports marketing agency Two Circles "has enabled Williams to build its database, which spans 140 countries, by more than 600%."

Berry: "One of the things historically with Formula 1 in particular is that it’s been a bit detached from the fan. … Along comes social media, and the changes in that area, and suddenly you can create a direct, one-to-one relationship, something that we’re just discovering and finding fun."

He added that "there are parallels between Liberty’s and Williams’ plans" and feels that the sport is being revitalized under F1's new ownership. CAMPAIGN LIVE

Leclerc to use number 16 in Formula 1

Ferrari-backed Charles Leclerc will use 16 as his permanent number when he graduates to Formula 1 with Alfa Romeo Sauber in 2018, the outfit has confirmed.

Leclerc had long been tipped to make the step up to Formula 1 after storming to the Formula 2 title as a rookie, taking eight pole positions and seven victories along the way.

Following runs with Haas in 2016, Leclerc made several practice and test outings with Sauber over the second half of the 2017 season, most recently in Abu Dhabi last week.

He was subsequently announced as a driver during a launch at the Alfa Romeo museum.

Under Formula 1 regulations introduced in 2014, drivers are free to choose a number between 2 and 99 to carry throughout their career, with 1 reserved for the reigning champion.

Leclerc will use 16, Sauber has confirmed to GPUpdate.net.

"I remember watching Formula 1 being younger and dreaming of one day being part of it," said Leclerc in a post on Instagram after confirmation of his promotion.

"I can't believe this day has arrived and that I will be racing with Alfa Romeo Sauber F1 Team for the 2018 Formula 1 World Championship.

"I am hugely thankful to all the people who have been involved in my path to Formula 1.

"A special thought to my father that did absolutely everything for me to get there and to Jules that also helped me massively. I wish you two were here to see that, but I'm sure you will follow me from up there.

"Also a special thank you to the Ferrari Driver Academy/Scuderia Ferrari, my sponsors/partners, Nicolas Todt/All Road Management, my family, all the people close to me during all these years & obviously Alfa Romeo Sauber F1 Team for giving me this opportunity.

"Still a long way to go to my second dream… so back to work and see you in Melbourne."

Leclerc will link up with Marcus Ericsson, who joined Sauber from Caterham at the end of 2014, and has connections with the outfit's owners, Longbow Finance.

Marcus Ericsson has expressed confidence that Sauber can make a "big step" in 2018 after retaining his position with the team for another season.

Ericsson joined Sauber from Caterham at the end of 2014 but accepted in Abu Dhabi that his position was reliant on the level of the squad's partnership with Ferrari.

Sauber has partnered with Alfa Romeo, part of the Fiat Chrysler Automobiles group, but Ericsson was favored over Antonio Giovinazzi as Charles Leclerc's team-mate.

Ericsson has not scored a point since the Italian Grand Prix in 2015, but believes progress can be made in 2018, as Sauber strives to move back into the midfield.

"It is a great honor for me to be driving for this team in 2018, and I am excited and proud to be part of this promising journey," said Ericsson.

"I am confident that I can add to the knowledge and experience of the team.

"This winter is going to be very busy, and it will be important to push the development of the car in order to have a good start to the season.

"I am optimistic that 2018 can be a big step and a good chance for us to move up in the field."

Frederic Vasseur, who joined Sauber midway through 2017 and instigated a closer alliance with Ferrari, having severed its planned Honda partnership, expressed confidence over his line-up.

"With Marcus and Charles, we have a strong driver duo for the debut season of Alfa Romeo Sauber," said Vasseur.

"Marcus is an experienced Formula 1 driver, who knows the procedures and the team well, after having worked together for the past three years," said Vasseur.

"He is a team player, and has a very positive attitude.

"Charles has proven his talent in several racing series, most recently winning the Formula 2 title.

"He had the chance to drive in four FP1 sessions and two tire tests for us this season, and convinced the team with his professionalism and charisma.

"I look forward to going into 2018 with this driver pairing, and I am convinced that they will complement each other very well."