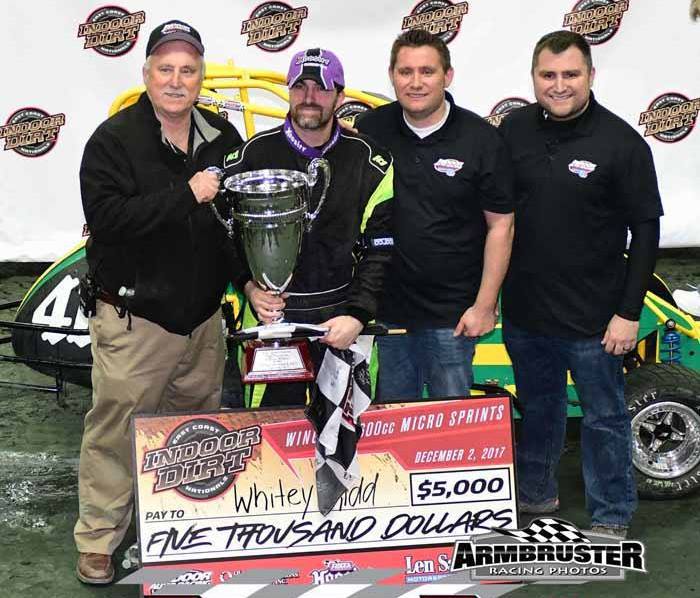 TRENTON, NJ – A restart with two laps left in the first annual East Coast Indoor Dirt Nationals inside CURE Insurance Arena in Trenton, N.J. enabled Whitey Kidd, III of Staten Island, N.Y., to shoot by Alex Bright of Collegeville, Pa., who had led from the halfway mark of the 40-lap contest, and score a dramatic, shocking, and well received Micro Sprint win.

“I can't believe he (Bright) gave me the outside lane for the restart," Kidd said. “Once the green dropped, I shot by him. I couldn't possibly be any happier than I am right now."

Bright said he was comfortable with his lap 38 restart lane choice. “I was able to restart from the bottom, what, may have been seven or eight times? I had no problems on any of those. Just the one that mattered the most," Bright reasoned.

The runner-up immediately sought out Kidd on the homestretch after the race to congratulate him on his winning ride.

Bright had started sixth in the race, and Kidd 13th. The third place finisher, Brian Carber of Pipersville, Pa., marched from a 22nd place start to finish third.

“I set up my car to run the second half of the race," Carber offered. “All I had to do was miss all of the wrecks in the first half, which I was able to do. Just a little ding in the rear bumper," Carber said.

Tim Buckwalter of Pottstown, Pa., took fourth and Austin Quick of Etters, Pa., was fifth. Both Buckwalter and Quick started inside the top twelve but went to the rear of the field once each for being involved in accidents.

Ryan Smith, Kunkletown, Pa., Luke Thomas, Wyoming, Del., early leader Kyle Lick, Lehighton, Pa., Eddie Strada of Hamlin, Pa., and Kenny Miller of Morgantown, Pa., rounded out the top ten finishers. Thomas started 23rd in the 24-car field, Lick led from the pole position at the start for the first 17 laps before becoming involved in a crash from which he returned, and Strada and Miller each went to the rear of the pack for accident involvement at one point or another in the race.

The crash that took Lick out of the lead happened on a restart coming down for the green flag. Bright, who had taken the lead just one lap earlier, got off to a good start but Lick was clipped from behind by another competitor, sending him into Bright. Bright managed to retain control but Lick was clobbered by several other front runners, effectively ending his bid for the win.

“I felt somebody clip the right rear of my car but I was able to save it," Bright said.

Fourth place starter Mike Iles of Medford, N.J., escaped injury after a spectacular series of flips that occurred on a lap 12 restart when the field bunched in front of him.

Eight ‘Alphabet Mains’ preceded the East Coast Indoor Dirt Nationals. The pair of 10-lap E-Mains were won by Joey Jarowicz of Tewksbury, N.J. and Rich Mellor of Wrightstown, N.J. The two D-Mains were captured by Matt Janisch of Nazareth, Pa., and Travis Hill of Sewell, N.J. while the pair of C-Mains were snared by Tyler DeVault of Delanco, N.J. and Robbie Hocker of Warwick, N.Y.

A pair of B-Mains transferred the top six finishers into the A-Main. These were won by Kidd and by Ryan Smith of Kunkletown, Pa.

Excellent track conditions prevailed this night as was the case for the entire East Coast Micro Dirt Nationals with not a single hole nor rut in the surface nor a single molecule of dust.

A total of 84 drivers and teams attempted to qualify for the 24-car A-Main, meaning that sixty teams were sent home.

The race was the first of four Indoor Auto Racing Series events and the only one to be run on a dirt track.

The scene now shifts to the PPL Center in Allentown, Pa., on January 5-6, 2018 with the running of the Ironton Telephone TQ Midget event followed by the 15th annual running of the prestigious Gambler’s Classic January 26-27, 2018 in Atlantic City, N.J.'s historic Boardwalk Hall.