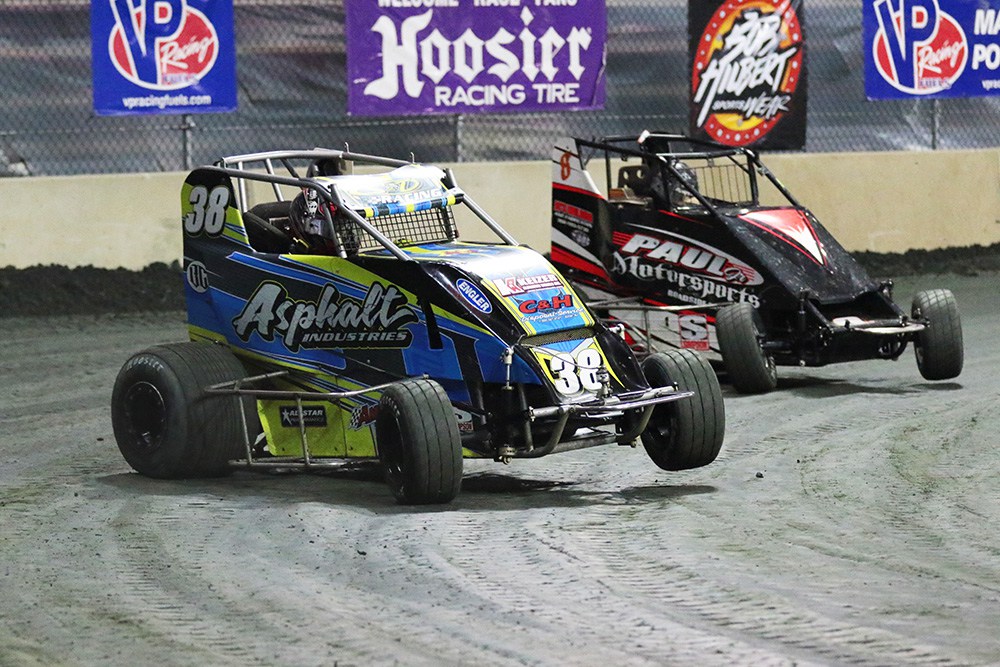 Among many laudable performances this night, the second place finish by Marrero in the second 15-lapper was the most noteworthy. After starting deep in the 15-lapper, Marrero, driving one of the oldest cars in the field, began a spellbinding charge to the front of the field, forcing his way by Pavel on the final lap of the thriller to place second.

At least half a dozen flips stopped the A-Qualifiers but no drivers were injured in any of the spills.

A dustless, table-top smooth speedway with a usable cushion greeted competitors throughout the afternoon and evening of action that featured 14 races and hours of practice.

Ten heat races were completed in advance of the four A-Qualifiers to set the starting orders for the events. The actual order was determined not solely by the raw results of the races but rather by ‘passing points’ – the number of positions gained by each entrant.

Pauch and Buckwalter each came from ninth and last starting position to win. Bobby Butler came from fifth. Alex Bright officially advanced from fourth to win his heat. But Bright was sent to the rear of the field on the first lap for, in the judgment of track officials, spinning another driver. Unfazed, Bright picked off all competitors to win.

A particularly noteworthy effort was authored by Eddie Strada in heat four. He flipped wildly two laps into the race but was able to keep racing after his car was righted, and finished third in the race.

With qualifiers locked in from the 84-car entry field, the 72 non-qualifiers remain eligible for the remaining 12 feature starting spots which will be determined through a series of “Alphabet Mains". Each of these ten lap races, ten in all, run Saturday.

The top two finishers in each race advance into the successive race at the back of the field. The ‘Alphabet Mains’ culminate in the running of two B-Mains, with the top six finishers in each joining the twelve Friday Night A-Qualifiers to form the 24-car starting field.

That sets the field for the first annual East Coast Indoor Dirt Nationals.

The race is the first of four Indoor Auto Racing Series events and the only one to be run on a dirt track.

The scene shifts to the PPL Center in Allentown, Pa., on January 5-6, 2018 with the running of the Ironton Telephone TQ Midget event. The scene shifts to January 26-27, 2018 to Atlantic City, N.J., for the 15th annual running of the prestigious Gambler’s Classic. The finale is set for February 9-19, 2018 at Times Union Center in Albany, N.Y. for the inaugural Indoor Auto Racing TQ Midget race, where the 2018 Indoor Auto Racing Series Fueled By VP Racing Fuels 2018 champion will be crowned.