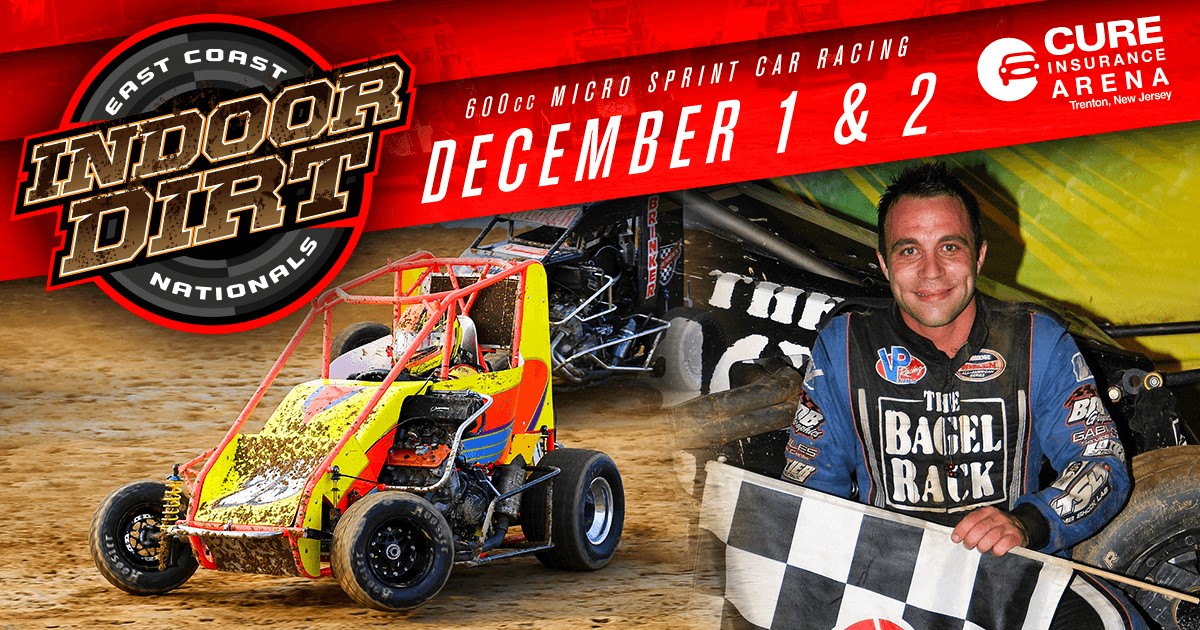 The clay’s down, bring on the cars!

That’s the sentiment the track building team of Len Sammons Motorsports Productions and the Indoor Auto Racing Series Fueled by VPâ€ˆRacing Fuels as the inaugural East Coast Indoor Dirt Nationals at the CUREâ€ˆInsurance Arena in Trenton, NJ is one day away.

A dense layer of choice deep dark brown clay was delivered and unloaded on the concrete floor of the CURE Insurance Arena on Tuesday, November 28 and was carefully worked and shaped into banking contours in the pair of sweeping turns throughout the day on Wednesday, November 29 in preparation for the first East Coast Indoor Dirt Nationals at the CUREâ€ˆInsurance Arena in Trenton, NJ.

Any of the over 90 Micro Sprint drivers and teams entered in the event are eligible to hit the track for the practice, which begins at 7:00 PM and runs until 10:00 PM Thursday night.

Racing for real will start on Friday at 7:00 PM with nine heat races. Unlike previous Indoor Auto Racing Series TQâ€ˆMidget events, there will be no time trials.

Drivers will pick for qualifying positions. Those with a ‘bad draw’ will be rewarded with passing points. The top performers will then be divided into four A-qualifier feature races.

On Saturday, points from Friday’s events will line-up all drivers into “alphabet mains" which will begin at 5 p.m. While high point drivers will lock into Saturday’s A-Main, expected to start after 8 p.m., the other racers will have the opportunity to advance from twin F, E, D, C and B-mains to make the 40 lap “A" feature.

The field also includes the best drivers and teams from Micro Sprint racing.

In fact, one Micro Sprint car owner is so sure one of the division regulars will win the event, he’s willing to put his money on it. Should any non-regular of 600cc Micro Sprint racing win Saturday’s feature event the car owner will add a $500 bonus to the win total.

Tickets for both days of the event are available at the Box Office. Advance tickets are available by calling 800-298-4200 or indoorautoracing.com.

Though this is a new attraction, the CURE Insurance Arena (formerly Sun National Bank Center), has hosted TQ Midget racing for the past four years on the arena’s concrete floor.

Anthony Sesely, a four-time winner on the concrete floor inside Atlantic City’s Boardwalk Hall, has a new Hyper built dirt car outfitted with a Dave Orange 600cc motor. The team recently tested outdoors for the event. After some new car bugs were worked out, Sesely impressively was putting down some fast laps at Delaware’s Airport Speedway.

These events will be held on the concrete floors of the PPL Center in Allentown, Pa., Boardwalk Hall in Atlantic City, N.J. and the Times Union Center in Albany, NY.

Further information is available at indoorautoracing.com, email to motorsports@aarn.com or by calling 609-888-3618.