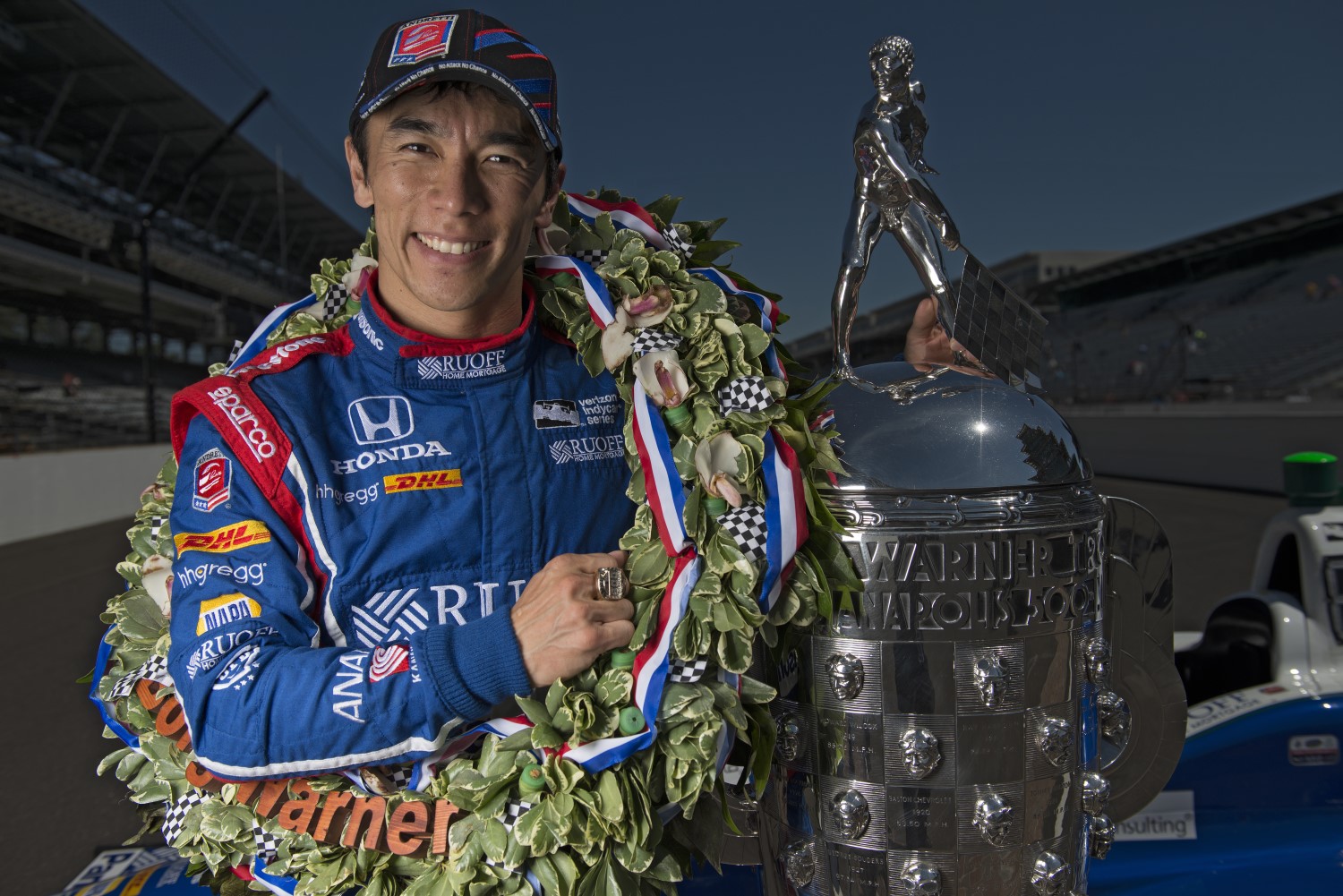 UPDATE The iconic Borg-Warner Trophy is leaving the United States for the first time in its 82-year-history, traveling this week to Japan for a 15-day celebration of Takuma Sato's victory in the 101st Indianapolis 500 presented by PennGrade Motor Oil.

The Borg-Warner Trophy left its permanent home at the Indianapolis Motor Speedway Museum on Nov. 28, flying from the United States to Tokyo for a variety of festivities to honor Sato as the first Japanese winner of "The Greatest Spectacle in Racing" and also to celebrate Honda's 12th Indianapolis 500 victory.

Stops on the Japanese tour include a variety of events in Tokyo, the Twin Ring Motegi race circuit and the Japanese cities of Nabari and Fukuroi.

"I think it is very special that the Borg-Warner Trophy is traveling to Japan," Sato said. "The trophy represents winning the greatest race in the world, and I am very proud to have won the 2017 Indianapolis 500 and have my image on the trophy.

"For nearly two weeks, the trophy will be seen throughout Japan by fans and media. I am honored to be the first Japanese driver to win the Indy 500 and extremely grateful the Borg-Warner Trophy will be traveling outside United States for the first time ever to celebrate my team's and Honda's accomplishments. Let's do it again next year, too!"

Winning the Indianapolis 500 comes with the honor of having one's face sculpted onto the world-famous trophy. Separate squares are affixed to its sterling-silver body, on which each winner's face, name and winning year are permanently etched.

Every Indianapolis 500 winner's face is immortalized on the trophy, all the way back to Ray Harroun, victor of the inaugural race in 1911. There also are two sets of dual victors' faces on the trophy from the era when primary drivers often shared cars with relief drivers, L.L. Corum and Joe Boyer in 1924 and Floyd Davis and Mauri Rose in 1941.

Famed sculptor William Behrends has created each winner's face in clay since Arie Luyendyk in 1990, a total of 28 likenesses. That final image is cast in a sterling-silver, bas-relief likeness the size of an egg and placed on the trophy.

The only likeness on the trophy not cast in sterling silver is a 24-karat gold portrait of Tony Hulman, who saved IMS when he purchased it in 1945. Hulman's image was added in 1987. The Hulman-George family continues to own the Speedway today.

"BorgWarner is thrilled to be bringing the Borg-Warner Trophy to Japan to honor Takuma Sato the first Japanese driver to win the Indianapolis 500," said Scott D. Gallett, vice president of marketing, BorgWarner Inc. "It's BorgWarner's honor to help celebrate Honda's 12th Indy 500 win and Takuma's first "500" win in their home country. We are very proud to show the Borg-Warner Trophy to the people of Japan, race fans, media members and our employees. This historic and iconic trophy which weighs 110 pounds and stands over 5 feet tall represents the wonderful history and tradition of the Indianapolis 500 and its winners dating back the first "500" in 1911."

In 1935, the Borg-Warner Automotive Company (now called BorgWarner) commissioned Gorham, Inc. of Rhode Island, through Spaulding Jewelers of Chicago, to create the trophy at a cost of $10,000.

Unveiled at a February 1936 dinner in New York hosted by then-IMS owner Eddie Rickenbacker, the Borg-Warner Trophy was officially declared the prize for Indianapolis 500 winners. It was first presented that same year to champion Louis Meyer, who said, "Winning the Borg-Warner Trophy is like winning an Olympic medal."

BorgWarner has supplied the turbochargers used by every Verizon IndyCar Series team since 2012. Honda is an engine supplier in the series and has won the Indianapolis 500 12 times in the last 14 years.

"We are very happy that the Borg-Warner Trophy is traveling to Japan this week as part of Honda Racing THANKS DAY at Twin Ring Motegi," said Art St. Cyr, president, Honda Performance Development. "The Indianapolis 500 is one of the most important races in the world and to have Takuma Sato win the 2017 event in a Honda-powered car was certainly a historic part of the event's legacy. Honda's 12 wins in the Indy 500 are something everyone in our company is very proud of. For the Borg-Warner Trophy to be traveling to Japan, representing the '500' and taking its special magic directly to Honda associates and fans in Japan will make for a very special day."

Tuesday, Nov. 28: Borg-Warner Trophy departs Indianapolis Motor Speedway Museum for Japan via van to Detroit. Then it is flown from Detroit to Minneapolis to Tokyo.

Tuesday, Dec. 12: Borg-Warner Trophy departs Tokyo to Minneapolis and then Detroit before being driven to the IMS Museum to complete trip.

11/27/17 The Borg-Warner Trophy will leave the U.S. for the "first time in its 82-year history this week when it travels to Japan for a series of events" with '17 Indy 500 winner Takuma Sato.

Sato tomorrow will "begin a 15-day trip that will include visits to Tokyo, Motegi and Nabari, home of the BorgWarner plant."