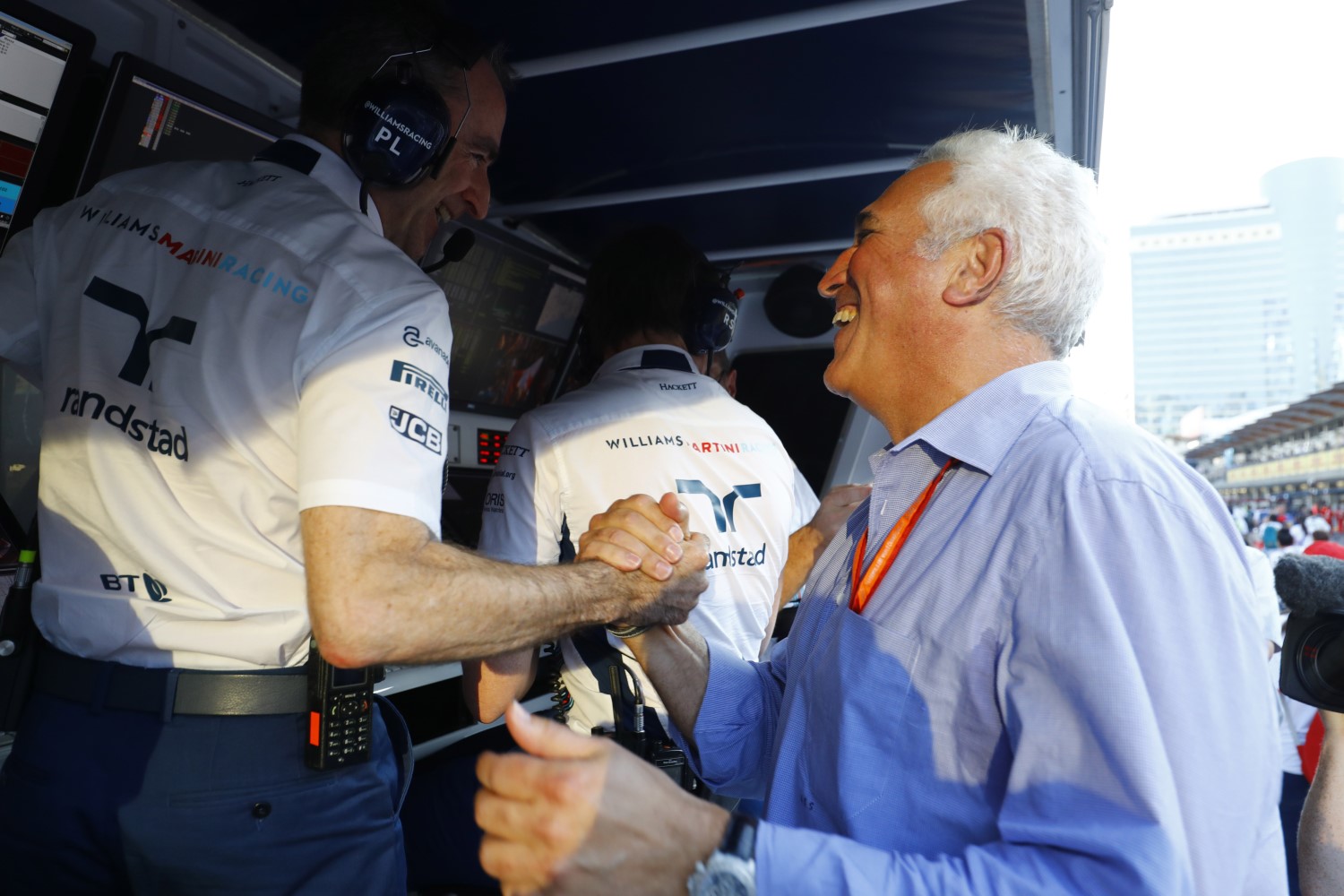 Stroll 'understands' need to improve – Lowe
(GMM) Paddy Lowe has admitted he hopes Lance Stroll learns from his difficulties in 2017.

19-year-old Stroll, backed by his billionaire father Lawrence, has struggled at times during his F1 debut season, including at the Abu Dhabi finale.

"It seemed that he could not get the car to work properly in terms of balance," Williams boss Lowe said.

The British team has said farewell to Brazilian veteran Felipe Massa, and so given Stroll's struggles, who will replace Massa is particularly important.

That is also the case because McLaren and Renault could be significantly more competitive in 2018.

"Of course, and Lance understands this better than anyone," Lowe, who is believed to be pushing for Robert Kubica to join Williams next year, said.

"I think selecting the right drivers is always important, no matter your circumstances."

(GMM) Despite the McLaren split, Honda thinks it has finally found the right direction in F1.

Although the Japanese marque was effectively dumped by the top British team, Honda's Yusuke Hasegawa is optimistic about the new partnership with Toro Rosso.

"The hardest year was undoubtedly the first, but also the third year was not easy," he told Speed Week.

"But I think we were able to recover a bit faster than in previous years."

It means he now has no doubt that Honda will eventually get to grips with F1 in the new era.

"Motor sport means everything to Honda. It's part of our DNA," Hasegawa insists.

"We know that racing is tough sometimes, but it's that challenge in terms of performance and technology that motivates us.

"So it doesn't make sense to give up half way. That does not fit with our mentality."

The Japanese also said he thinks Toro Rosso is a better fit for Honda.

"Toro Rosso has not been around as long and so they are more flexible," said Hasegawa. "It is easier to exchange opinions.

"McLaren is a top team, and Honda was not ready for a top team. That's a fact."

But he also admitted that 2018 will be tough, especially in light of the ever more tightening long-life engine rules.

"Technologically it is not easy and it gets even harder," said Hasegawa. "But we are already working very well with Toro Rosso.

"For us it is very important to stay in formula one. We must continue to dream of becoming world champion," he added. "That's our motivation and what keeps us going."

(GMM) The Italian press is heading into the winter break concerned about Ferrari's late-season performance.

Mercedes finished its 2017 campaign with both the drivers' and constructors' titles and a one-two in Abu Dhabi.

"It was a sad and pale finale for Ferrari," said La Gazzetta dello Sport.

"Questions hang in the air. Is Vettel-Raikkonen able to beat Hamilton-Bottas?

"What caused the psychological collapse of Vettel and the wavering achievements of Raikkonen? Does Ferrari need a mental coach or the complaints of Arrivabene and Marchionne?

"From the outside one has the impression that at Ferrari there is a constant, exaggerated and pointless tension," the sports daily concluded.

Corriere dello Sport said that as the fireworks exploded in Abu Dhabi, "the alarm bells sounded in Maranello".

Well-known Italian F1 insider Leo Turrini wrote: "Napoleon claimed he could change the world in 100 days but he failed.

"Now Arrivabene and Binotto have just over 11 days to prepare for 2018."

(GMM) The top men at Mercedes are predicting a bright future for Max Verstappen.

Although earlier linked with a move to silver, 20-year-old Verstappen recently extended his stay at Red Bull through 2020.

"There's a big hype around him but the best way to end it is to keep beating him," he added.

Hamilton said Verstappen is not yet as good as himself or Sebastian Vettel, "but Max has incredible skills. I think that in 10 years time he will be as good as we are now."

"But first he has to complete his development process and combine the talent that he has already with the ability to develop a car."

(GMM) Chase Carey and Jean Todt, arguably the most powerful men in formula one, have played down Ferrari's quit threat.

Amid Liberty Media's plans for new engine and budget cap rules, Ferrari president Sergio Marchionne said the famous marque might not race beyond 2020.

Mercedes' Toto Wolff, who is normally in political lock-step with Marchionne, says that threat must be taken seriously.

"Everything Marchionne says must be taken seriously," he insisted.

"F1 must remain the pinnacle of technology and the best competition, and if you dilute this message with standard specifications and false situations that penalize the best and help the weakest, I think that's not our DNA."

So when asked if he is currently happy with Liberty, Wolff told Corriere della Sera newspaper: "For now the answer is no.

"But let's delay that (judgement) for a year. For now I don't want to vote."

Part of the dispute with Liberty is about F1's commercial income this year, which has significantly dipped.

"As we say in the States, there is no such thing as a free lunch, particularly if you're trying to develop and grow," F1 chief executive Chase Carey told EFE news agency.

As for Ferrari's quit threat, he answered: "The Ferrari brand is an incredibly important and valuable partner and our intention is to keep them here."

According to Tuttosport, FIA president Jean Todt agreed: "I think it would be too painful for Ferrari not to be in formula one."

German broadcaster in talks with F1
(GMM) Talks are ongoing between Liberty Media and the broadcaster RTL about extending the free-to-air television deal for Germany.

At the same time, F1 chief executive Chase Carey was admitting that RTL's contract is yet to be extended for 2018.

"We hope we can still present formula one to Germany's many fans again next year," he added.

"Although the tension dropped slightly at the end of the season, we are satisfied with the numbers for 2017," said Loppe.

The German pay broadcaster Sky also does not have a F1 deal in place for 2018.

From the point of view of the tires, the Italian said he is happy with the season.

"I praise my men because they did a lot of work and I think the drivers had fun," Pirelli's chief executive told Rai radio.

"The tires played an important role and that's a source of pride."

Turning to 2018, Tronchetti Provera said: "Next year there will be a new very soft tire but the tires will generally be softer.

"However, I hope formula one finds a healthy competition between Mercedes, Ferrari and Red Bull. The category remains the king of motor sport, and the audience is still strong, but some races were not particularly exciting," he added.

As for Ferrari's season, he said it was a tale of "two parts".

"The first was extremely competitive but the second was a very unlucky Ferrari with a few matters of reliability that changed the championship," said the Italian.

As for Ferrari's post-2020 quit threat, Tronchetti Provera said: "Ferrari and F1 are an inseparable combination."

Hamilton under pressure to use number 1

(GMM) Lewis Hamilton says he still does not want to wear the number 1 in 2018.

Traditionally in F1, the world champion wears the number 1 the following year.

But since drivers have been allowed to personalize their permanent numbers a few years ago, champions actually had the option of not wearing number 1.

Hamilton is among the drivers who have built their number – in the Briton's case '44' – into a personal brand, and the Mercedes driver says he wants to keep it for 2018.

"My engineers want me to and some other people want me to," he admitted to Brazil's Globo.

"They're trying to get me to put the number 1 on the car, but I don't plan to change. The 44 is personal. Everyone has a lucky number.

"Maybe I'll put the 1 in the 44 or something — maybe we can play around and do something like that. But I really don't like this number 1 thing. Other drivers have had it in the past but 44, that's mine," Hamilton smiled.

(GMM) Nico Rosberg says there are signs his former Mercedes teammate Lewis Hamilton will soon retire from formula one.

At the end of last year, German Rosberg retired within days of beating Hamilton to the 2016 title.

And now he says there are signs Hamilton is also thinking of calling it a day.

"He has hinted this year that he doesn't want to spend so much time travelling. He wouldn't do that if he wasn't thinking of it at least a little," Rosberg told the German news agency DPA.

However, it is believed talks about extending Hamilton's Mercedes contract beyond 2018 have already started.

"He is an important part of the team," boss Toto Wolff told Corriere della Sera newspaper.

"He has developed in a way that benefits both himself and the team. So yes, I hope he stays for a good while."

Zetsche happy with Bottas at Mercedes

Earlier in 2017, the German marque may have been in talks about snapping up Max Verstappen or Sebastian Vettel.

However, Valtteri Bottas was re-signed for 2018, even though the Finn has had a season of mixed form.

"We have proved that we can handle two strong drivers and provide entertainment on the TV screens," Zetsche, the chairman of Mercedes' parent company, told the German broadcaster Sky.

"We won all that we could win this year, so I'm extremely satisfied with the drivers," he added.

"We won the constructors' championship, and that's only possible with two really strong drivers. Whether there's one or two tenths between them or one has more poles than the other, in the end that is the details," said Zetsche.