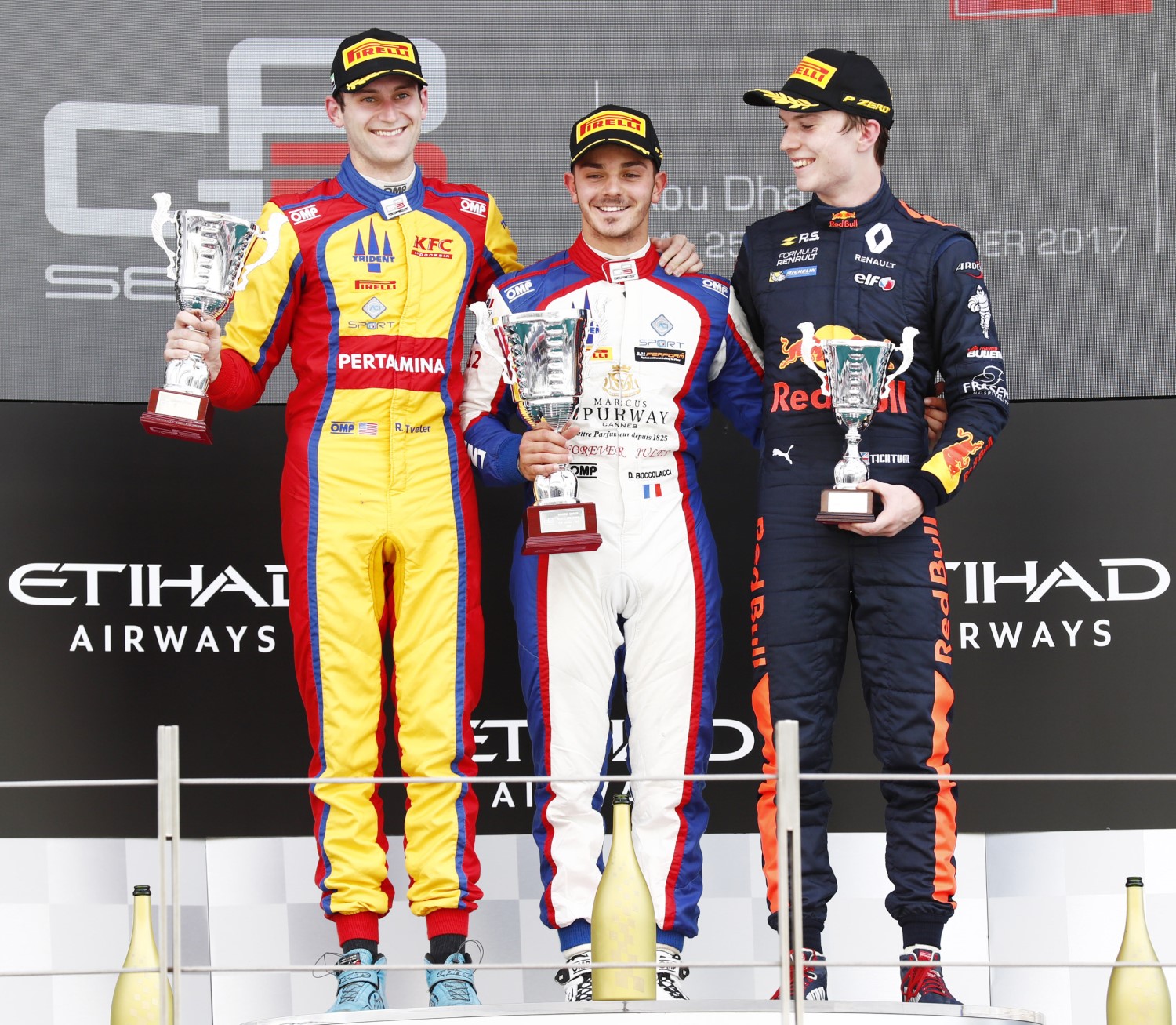 UPDATE Niko Kari and Bruno Baptista have both been handed time penalties by the race stewards following a review of actions late in this afternoon’s Race 2 at the Yas Marina Circuit, dropping both drivers out of the points as a result.

Kari was handed a 10 second penalty after the stewards judged him to have caused the collision with Steijn Schothorst at turn 14: the Finn, who finished the race in provisional 6th position, is now classified P13.

Baptista was handed a 5 second penalty for leaving the track and gaining an advantage at turn 11, where he overtook Kari and Arjun Maini: the Brazilian, who provisionally finished in P7, is now classified 10th.

As a result of these penalties Maini is now classified in P6, ahead of Kevin Joerg and Jack Aitken.

11/26/17 Dorian Boccolacci finally grabbed his elusive maiden win in this afternoon’s Race 2 at the Yas Marina Circuit, making a strong start before overtaking for the lead early in the race and then soaring off into the distance in the last race of the 2017 GP3 Series, ahead of teammate Ryan Tveter and Daniel Ticktum.

The race opened once again to gloriously sunny conditions, with poleman Tveter making a perfect start to lead Boccolacci, Steijn Schothorst, Alessio Lorandi, Ticktum, Arjun Maini, Niko Kari and George Russell into turn 1: the Frenchman was soon all over the race leader as the pack took shape, with Ticktum putting Lorandi on notice on the back straight and Kari squeezing by Maini for P6 just behind them.

It only took 2 laps for Boccolacci to make the pressure stick: he was easily through Tveter for the lead on the back straight before heading off into the distance, while further back Russell and Maini were already involved in a lengthy battle for supremacy, swapping positions for lap after lap. Ticktum was less interested in a protracted fight though, and blasted inside and through Lorandi on the back straight on lap 7 and was soon looking for more.

Next time through he tried to repeat the move on Schothorst, who looked to close the door: Ticktum squeezed past but with all 4 wheels over the line, picking up a 5s time penalty in the process. Worse was to come for Lorandi, who also tried the move a lap later but lost his front wing on the Dutchman’s rear tire, prompting an unscheduled pitstop for the Italian.

Russell finally broke the chain with Maini on lap 11 and headed off after Kari, who himself was closing in on Schothorst: it took just 2 laps for the trio to engage, with the Dutchman and the Finn colliding to give the new champion a clear run through at the marina complex. Ticktum, meanwhile, continued his serene run up the timesheets as he easily dispatched Tveter for P2 on the road, and pushed hard to overturn his time penalty.

At the flag Boccolacci has sailed to a simple win by 5.5s over teammate Tveter, who stayed close enough to Ticktum to gain P2 back after the Briton’s time was added, with Russell rounding out a tremendous season in P4 ahead of teammate Anthoine Hubert and a recovering Kari, with Bruno Baptista holding on from Maini on the line by 0.1s for P7.

So the 2017 GP3 Series season closes with George Russell as champion ahead of teammates Jack Aitken and Nirei Fukuzumi, and their team ART Grand Prix once again finishing as Teams’ champions, ahead of Trident and Jenzer Motorsports.