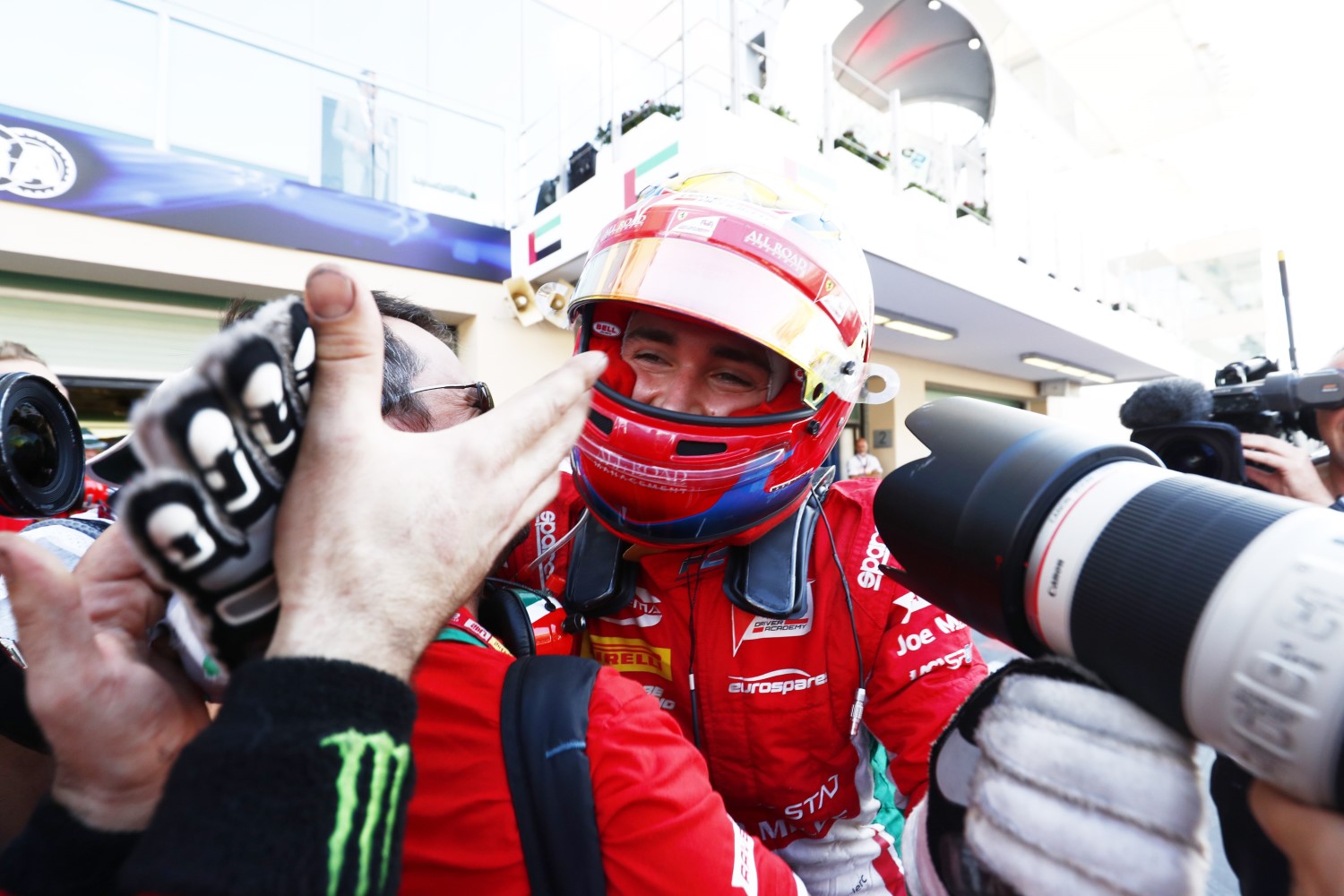 Charles Leclerc topped off his championship run with victory in the final race of the 2017 Formula 2 Championship this afternoon for the sprint race at the Yas Marina Circuit, slicing through his rivals all race long before mugging race leader Alexander Albon last time through on the long straight and running all the way to the flag ahead of Albon and Nicholas Latifi.

The race opened to the usual sunny conditions, but poleman Jordan King was unable to take advantage of his position: when the lights went out he bogged down, allowing ART teammates Albon and Nobuharu Matsushita to lead Latifi into turn 1, with the Canadian mugging the Japanese driver at the next corner as they led Nyck De Vries, Leclerc, King, Luca Ghiotto, a fast starting Sergio Sette Camara and Artem Markelov around the circuit, before the later pair switched places at turn 8.

Albon set about building his lead, quickly breaking the DRS tow to Latifi as the positions shook out behind him. Markelov and Ghiotto were on a charge as they looked to close out the Teams’ title, and the pair ran either side of King on the back straight, with the Russian brushing King’s tyre, sending him off track with a puncture. The pair soon had a new threat: Oliver Rowland had made astonishing progress from the back of the grid to sit behind them, with Markelov playing rear gunner to allow his teammate to try to progress with his own championship fight.

Leclerc was also moving forward, and on lap 11 he was all over the rear of De Vries’ car: the champion wasted little time in moving up to P4 before eying his next challenge, bringing home a double podium in his final event. It only took 3 laps for the Sauber test driver to catch and pass Matsushita, whetting his appetite for more.

Ghiotto was the only other driver capable of running at Leclerc’s pace, having also blown by the ailing De Vries, but Matsushita was in a determined mood, parrying every attack as the pair fought all the way to the flag. Latifi succumbed to the inevitable attack with 4 laps to go, and with Leclerc closing down the gap to Albon the stage was set for a barnstorming final few laps.

Albon’s job was made a little easier by yellow flags on the back straight down to the marina for debris in the area, shutting down the 2nd DRS zone and canceling one area of attack. If Leclerc was going to win he needed to make the pass earlier in the lap, but as the laps rolled down the Monegasque was running out of options: he launched an attack up the inside ahead of the long straight, clattered into the race leader, and the pair ran side by side all the way down to turn 8.

Leclerc had the inside line and just squeaked through, and with no 2nd DRS zone Albon had no way to fight back: the pair crossed the line 1s apart, with Latifi 2s further back to round out the final podium of the year ahead of Matsushita and Ghiotto; Markelov held off Rowland for P6, and Sette Camara grabbing the last point for 8th place.

Charles Leclerc extended his points score as champion to 72 points, with Artem Markelov finishing as vice-champion ahead of Oliver Rowland and Luca Ghiotto, and RUSSIAN TIME celebrated their Teams’ title win, finishing the 2017 FIA Formula 2 season 15 points ahead of PREMA Racing and DAMS.