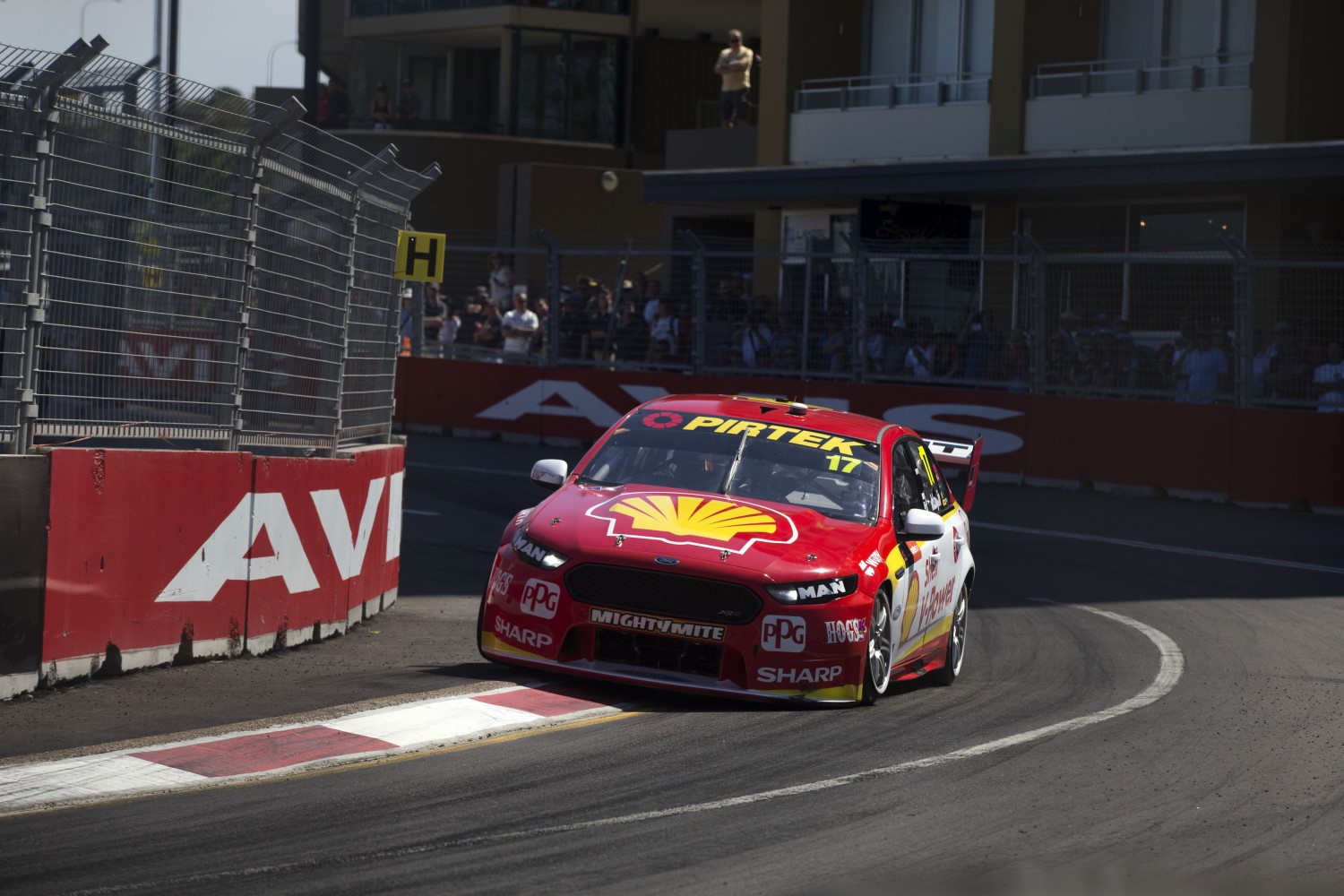 Young star Scott McLaughlin has one hand on the Virgin Australia Supercars Championship after less than one chaotic lap at the Coates Hire Newcastle 500.

Shell V-Power Racing’s McLaughlin started the penultimate race of the season 30 points behind seven-time Champion Jamie Whincup and emerged 78 points in front, when it all unfolded after less than one 2.6km lap of the spectacular waterside circuit.

Whincup suffered near race ending damage when he brushed wheels with Nissan’s Michael Caruso on just the second corner of the 95-lap race, bending a steering arm. He spent 13 laps in the Red Bull Holden Racing Team garage repairing the damage.

“Far from ideal, sitting in the pits," Whincup said as his team raced to repair the damage. “We’ll dump a bunch of points today and it’s going to be tough from here.

“I thought we could go two wide with car 23, but he shut the gate, broke the steering and that’s the end of us. Unfortunate, it is what it is, we’ll push on."

The end result was McLaughlin first, Whincup twenty-first and last of the finishers.

McLaughlin now leads the Championship by 78 points from Whincup. McLaughlin now only needs to finish 11th in the final race to take his maiden title, even if Whincup wins the race.

“A long way to go but it was awesome. I am so pumped. Whatever happens tomorrow we will give it our best shot. A 1-2 for the team is as good as it gets," McLaughlin said.

“I really wanted it bad and got a good start for once in my life. To get the first race after a pretty hard and full-on day it was awesome."

“It was a good fight, we had some good battles and to come through from eighth on the grid was fantastic," Coulthard said. “We didn’t have the best qualifying car but we came through in the race. Fantastic 1-2 for the team and I am rapt for Scotty. We ticked a lot of boxes today."

The Ford squad now has an unassailable lead in the teams’ championship, breaking Triple Eight’s stranglehold on the trophy.

Simona de Silvestro, Supercars first fulltime female driver in three decades, had her best run of the season so far on what was effectively her first level playing field of the year – a track no-one else has raced on.

De Silvestro was outstanding all day in almost becoming the first female driver is Supercars history to finish inside the top ten with a sterling drive to be fifth until she got mobbed by a battle pack after 79 laps, forcing her wide and into the wall on the final turn.

More drama unfolded on lap 81 when a touch from van Gisbergen at Turn 8 sent Reynolds into the tire barrier, dumping the Erebus entry to sixth.

Van Gisbergen dropped places to Coulthard, Slade and Lee Holdsworth a short time later, while a 15-second penalty for the Reynolds contact added further to his troubles.

That left the reigning champion 16th in the final result, as Chaz Mostert, Scott Pye, Nick Percat and Will Davison to filled sixth through 10th.

Qualifying begins at 11:10am AEDT tomorrow before a Top 10 Shootout at 12:40pm and the final race of 2017 begins at 3:25pm before a new Supercars champion is crowned.

COULTHARD QUOTE: “It was a very good day for the team, and I’m wrapped for Scotty. I double-stacked twice in my first two pit stops which made is a hard day, but to be able to deliver the Teams’ Championship and a 1-2 finish with Roger Penske, Tim Cindric and everyone in town was very cool. The team have given us great cars, and we can do good things with them."

MCLAUGHLIN QUOTE: “I’m stoked for everyone at Shell V-Power Racing, to take the very first win in Newcastle and to have Fabs in second right alongside me on the podium is incredible! And to wrap the Teams’ Championship up is just amazing. What a day. Now to focus, and hopefully finish the job tomorrow."