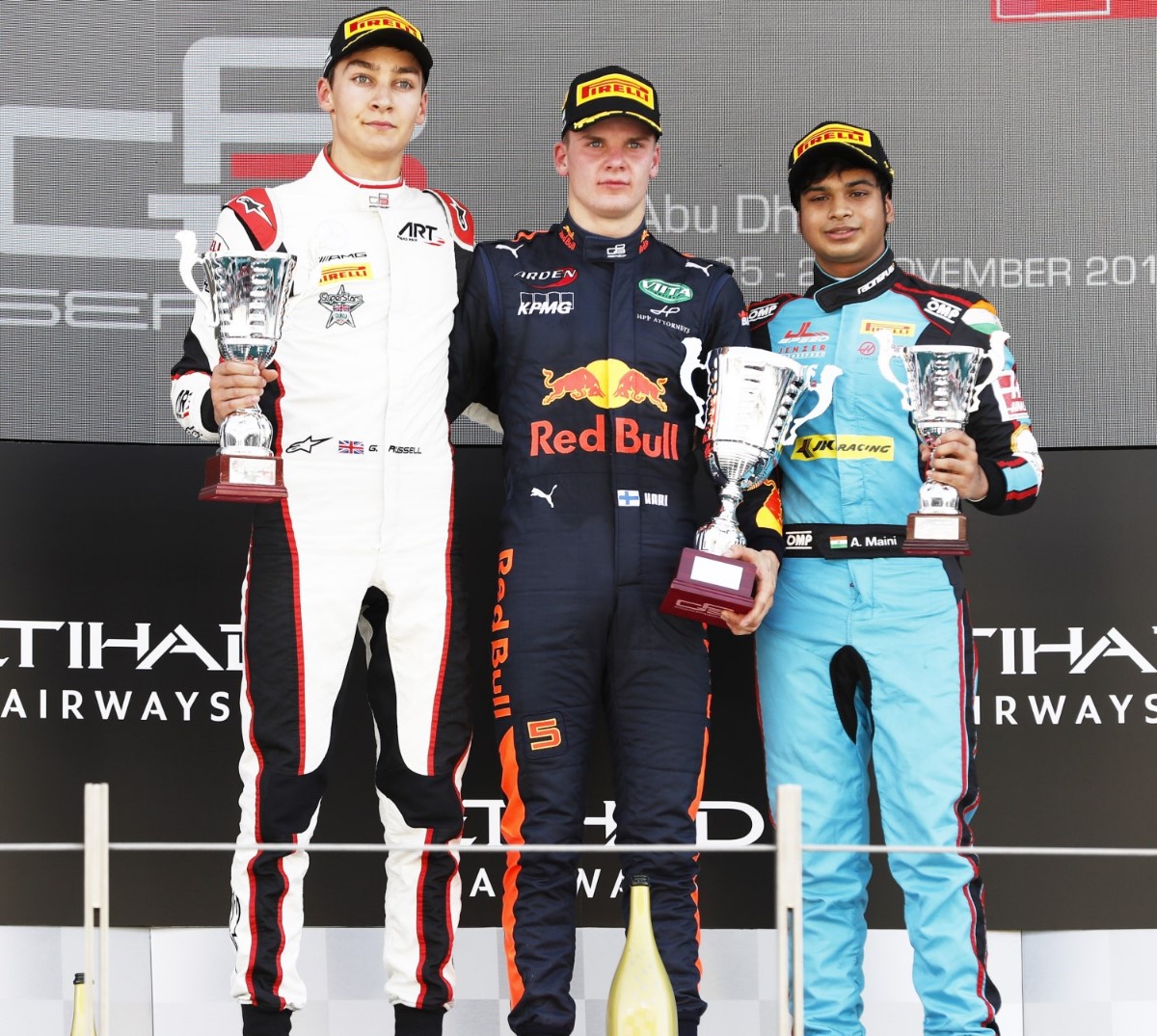 Niko Kari drove a perfect race in this afternoon’s Race 1 at the Yas Marina Circuit, pushing up to the lead at the start and absorbing all the pressure his rivals could through at him, along with a couple of VSC periods, for his maiden win in the GP3 Series ahead of 2017 champion George Russell and Arjun Maini.

The victory was made at the start: when the lights went out Arden teammates Leonardo Pulcini and Kari made great getaways from P2 and P3 respectively, leaving poleman Russell the choice of which driver to cover. He chose the Italian and pushed across to the inside line, leaving the outside wide open for Kari to swoop through and into the lead at turn 2, ahead of Russell, Pulcini and Maini, while behind them Nirei Fukuzumi and Raoul Hyman were slow to get away from the grid, delaying most of their rivals.

The Japanese driver clattered into Giuliano Alesi at turn 8, forcing both drivers to pit, while ahead of them Pulcini blew past Russell to set up an Arden 1-2 on track, with the top 4 edging away and behind them Dan Ticktum leading Dorian Boccolacci, Anthoine Hubert (who was hoping to insert himself into the fight for the vice-champion position), Alessio Lorandi, Steijn Schothorst and Ryan Tveter.

Kari was looking to build a DRS buffer back to his teammate when Marcos Siebert stopped at turn 8, prompting a brief VSC period on lap 5: the Finn easily controlled the restart with Russell almost catching Pulcini napping and being forced to run over the curbs to avoid the Italian, handing Kari the vital 1s gap he needed to avoid the DRS and allowing him to control the race, and his tyros.

Ticktum and Lorandi were both mugged at the restart but soon regained their positions, with the Briton sailing away into the distance and the Italian soon looking for more: as Hubert suddenly slowed with some sort of gremlin dropping him back through the field, Lorandi got the jump on Boccolacci on the back straight for P6 just before Alesi rolled to a stop at turn 20, bringing out the VSC boards once again.

Russell caught out Pulcini once again at the restart, but this time made it stick for P2 on the final turn, while Lorandi and Boccolacci resumed battle again, swapping position all around the circuit before the Italian finally made it stick on lap 14, with Schothorst inserting himself into the battle and forcing the Frenchman to keep an eye on his mirrors.

There was soon more bad news for Pulcini: his left rear started to deflate, dropping him back down the grid before an inevitable retirement on lap 17, handing Maini a place on the podium. Ahead of him Russell was unable to do anything about the speed of Kari, who punched the air with delight as he was greeted by the flag across the line. Ticktum rolled home a lonely 4th, ahead of Lorandi and Schothorst, who both broke away from the squabble behind them: Boccolacci just held off a fast charging Hubert, who drove a magnificent recovery effort for P8 and tomorrow’s pole, just ahead of Tveter and Kevin Joerg.