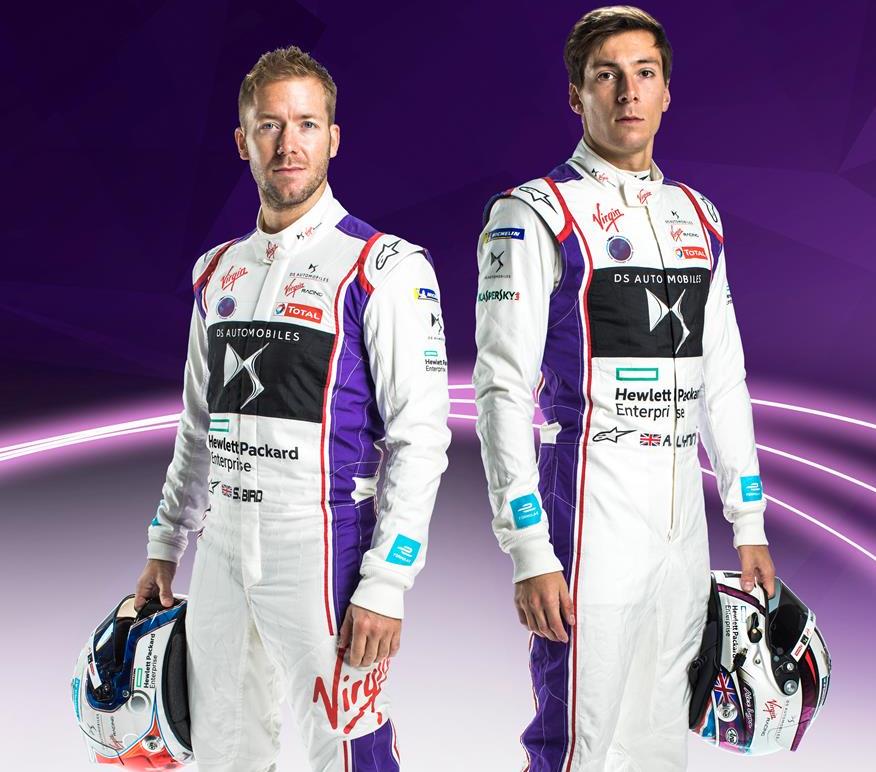 DS Virgin Racing has today launched its season four Formula E car – the DSV-03 – ahead of the opening rounds in Hong Kong, and coinciding with the anniversary of the team’s maiden victory.

The fully-electric single-seater features an enhanced livery in the team’s now familiar purple, red and silver color scheme, with subtle tweaks throughout. Under the cover, the experts at DS Performance have worked on further optimizing the performance and efficiency of the car, including a new upgraded software system.

In the cockpit sees the first ever all-British driver pairing of Sam Bird and Alex Lynn. Bird, 30, has competed in all 33 of the team’s race starts, securing five wins and nine podiums along the way to make him the third highest Formula E points scorer to date. Meanwhile, Lynn, 24, will embark on his first full-time campaign following his impressive debut last season in which he secured pole position at his first attempt; becoming one of only two drivers to have ever done so.

Today’s unveil also marks three years to the day since the team’s first ever win during the Putrajaya E-Prix in 2014 with Sam Bird at the wheel. This provided the inspiration behind the team’s new launch film, which celebrates the outfit’s heritage, successes and most iconic moments – both on and off the track – including the incredible double victory during last season’s inaugural New York E-Prix.

The 2017/2018 FIA Formula E Championship begins in Hong Kong on December 2 and 3 with a double-header set around the Central Harborfront and overlooking the city’s skyscraper backdrop. The 10-turn route extends 1.86km along Lung Wo Road, Man Yiu Street and Yiu Sing Street, and marks the second consecutive year for the city to host the event. The circuit remains largely unchanged from last season aside from a revised chicane at Turns 3 & 4, with the drivers reaching speeds of up to 200kph at the quickest point. New for this year will be two races of varying distances (43 and 45 laps) to add an extra element to the racing strategy.

DS Virgin Racing Team Principal Alex Tai said: “As one of only three teams to have won in every season, for sure, our aim is to continue our winning ways into season four. We have two very strong drivers in Sam and Alex, a quick car and a fantastic, experienced team, so we have all the elements needed to make a real impact in Hong Kong and beyond."

Driver Sam Bird said: “It’s always difficult to predict what will happen ahead of a new season but for sure we’ve got a good package and we’re ready to come out fighting. We had a series of very strong results towards the end of last season, which gave us a solid platform to develop on over the summer so hopefully this can translate into strong results."

Team-mate Alex Lynn said: “I’m very excited heading into my first full Formula E season. It’s an amazing opportunity and one I can’t wait to grasp and showcase what I can do. Preparations have gone really well, from testing and simulator work through to fitness. With DS Virgin Racing, I know I have a great team behind me and a very experienced team-mate alongside me, so I can’t wait to go racing."

DS Performance Director Xavier Mestelan Pinon added: “It’s great to start the season in such an iconic city as Hong Kong, and we’re looking forward to seeing the DSV-03 back on track. We achieved very positive pre-season testing results and this year, we will be able to start the season on the front foot, which is crucial when aiming for the win."