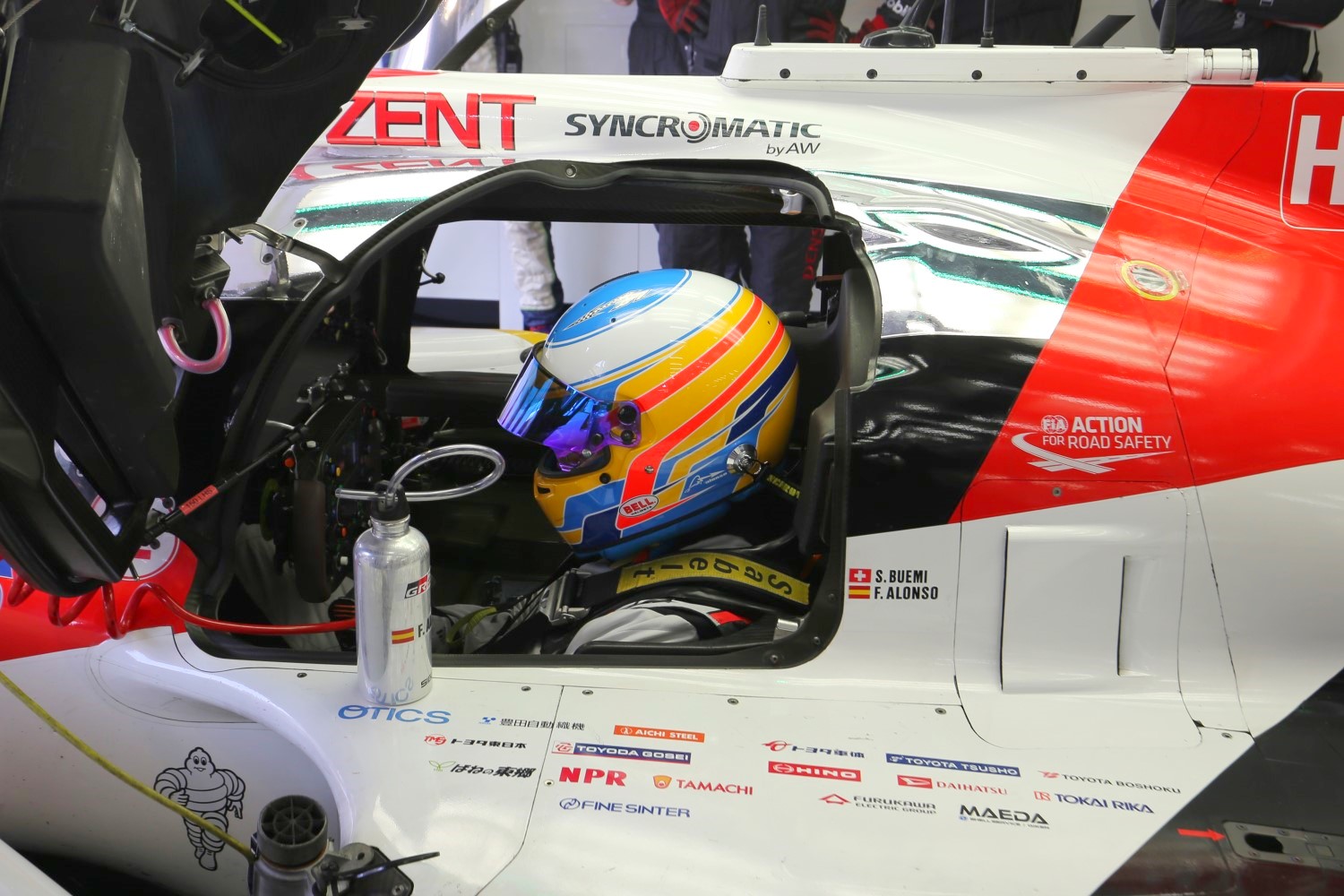 Following its victory in the Bapco 6 Hours of Bahrain on Saturday, its fifth of the season, the team returned to the Bahrain International Circuit to participate in the annual WEC rookie test.

The rookie test represented the perfect opportunity for Fernando, who is interested by Le Mans as well as endurance racing in general, to drive a state-of-the-art hybrid LMP1 car. He completed a total of 113 laps in the #8 TS050 HYBRID, a total of 611km.

Thomas, 19, joined the test as a reward for his impressive performances in LMP2 this season, which included a second-place finish at the Le Mans 24 Hours. He completed 31 laps in the#7 TS050 HYBRID in the morning session.

Sebastien’s driving today was limited to a 10-lap run in the morning but Mike had a busy afternoon session, taking advantage of the hot conditions to complete various tire tests, completing 64 laps.

Fernando Alonso: “It was a great day. Testing an LMP1 car is always a nice thing for any racing driver because these cars are amazing to drive. They are very consistent throughout a stint which is a positive thing. I have wanted to test a car like this for a long time now and today I could achieve that so I am happy."

Thomas Laurent: “I really enjoyed it today. It was my first time in an LMP1 car and it is the best car I have driven in my career. The downforce, the hybrid boost, the braking; it was all very impressive. I would love to drive a car like this again. Big thanks to TOYOTA GAZOO Racing. The team welcomed me really well. All the mechanics, engineers and management were very friendly, which I really appreciate."

Fittipaldi, Isaakyan and Celis Jr enjoy the RPM-MKTG Season award
With the end of the 2017 World Series Formula V8 3.5 season, the names of the drivers taking part to the FIA WEC rookie test at the Bahrain International Circuit were also proclaimed by RPM-MKTG and they were the top three in the championship. Pietro Fittipaldi drove the Porsche 919-Hybrid, Matevos Isaakyan went on-track with Oreca-07 Gibson of Vaillante Rebellion, and Alfonso Celis Jr. got behind the wheel of a Ferrari 488 GTE at AF Corse.

The test day saw the pit-lane open at 10 am after a briefing for the drivers with the race director. Then, they went straight to their garage and got in touch with the new cars. Only Isaakyan, who successfully competed in the European Le Mans Series in 2017 thanks to the SMP Racing program, was familiar with the world of endurance. Fittipaldi underwent a further briefing to discover the secrets of the Porsche 919, mainly the operation of the hybrid system. An old acquaintance of World Series, Miguel Molina, welcome Celis Jr. in the AF Corse garage. Molina went for a quick shake-down before handing the car to the Mexican, the third driver of Sahara Force India in Formula 1.

It was cool to have a roof on me, even if I got a bit used to it with Nascar. That’s for sure another kind of car, it’s amazing, there’s a lot of grip and acceleration getting out of the corners. Compared to World Series car, the breaking point is almost the same and the lap times are not that far too. Maybe just the lines are a bit different. At the beginning, you just feel a bit wired inside the cockpit, like when you play video games, but then you get used to it. Of course, there are a lot of procedures, but it’s nice to learn them especially with such a professional team like Porsche. I really want to thank them to make me feel comfortable, as well RPM-MKTG for this prize

Matevos Isaakyan
I was maybe the guy with the most experience with this kind of car, as I raced in ELMS, so we based the work more on race simulation and long stints compared to the usual work on procedures. It was a bit hard to get used to the brakes on this car, especially with a full tank. Lines are not much different to World Series, and the car is pretty close to ours for performance and driveability. It went pretty well, everyone was happy and for sure I want to thank RPM-MKTG for this opportunity

Alfonso Celis Jr.
Of course is always nice to drive a Ferrari. This was my first experience on a GT car, but I have to say everybody supported me to make it easier as possible. I started my day on very old tires, getting progressively on fresher tires. Is a bit wired to get used to a different view in the car, but being in the same track I raced the weekend helped a lot for the references. Breaking is for sure the biggest difference, but has been a nice experience. Now, thanks to this award from RPM-MKTG for the World Series, I can also say to have tested a GT car