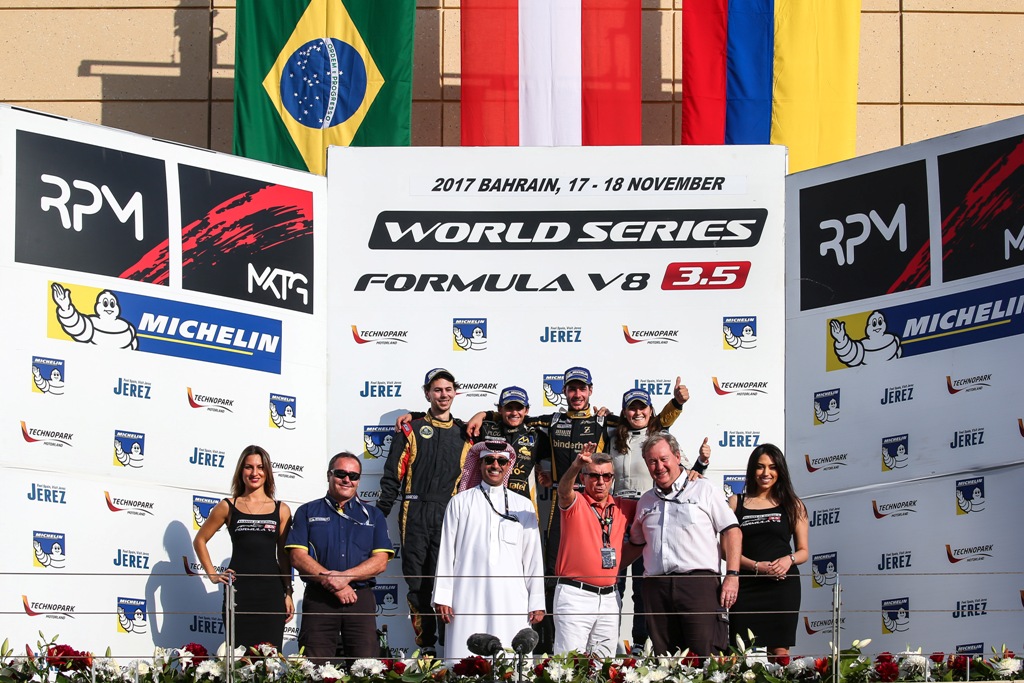 The final round of the 2017 World Series Formula V8 3.5 season was completed with a spectacular 1-2 performance for Lotus today at Bahrain International Circuit. After securing the driver title with Pietro Fittipaldi in race 1, the Czech squad cruised in race 2: in addition to taking the win with Rene Binder, Lotus secured the team crown. The podium was completed by Sauber Formula 1 Team Development Driver Tatiana Calderon (RP Motorsport), also best rookie.

As the lights turned off Binder kept the lead from the pole while Fittipaldi was able to overtake Henrique Chaves (AVF) for P2. On the other hand, Matevos Isaakyan (SMP Racing by AVF), got stuck on the grid and was forced to take-off from the pit-lane. In turn 3, Konstantin Tereschenko (SMP Racing by AVF) spun and had to retire, while a second-lap contact in turn 1 with Chaves cost Alfonso Celis Jr (Fortec Motorsports) an early pit-stop to change the nose.

On the third lap, Diego Menchaca (Fortec Motorsports) got by Yu Kanamaru (RP Motorsport) taking the virtual podium. At the beginning of the pit-window, on the fifth lap, Fittipaldi was the first man to take a tire change, followed by Isaakyan. Lap 6 also brought Binder and Kanamaru in. The Austrian returned on-track fourth, ahead of Fittipaldi, while Menchaca was leading.

The Mexican made his way in on lap 9, followed by Calderon, but he would receive a drive-through penalty for a yellow-flag pass. The same penalty came for Kanamaru for forcing another car. The Lotus Binder-Fittipaldi pairing thus got back atop the race. On the other hand, the Colombian female racer gained the third podium spot as she successfully defended herself from the attacks of team-mate Nissany.

Third place in points remained at stake until the closing stages. Celis Jr. was penalized 20 seconds for completing his pit-stop outside the window allowed by the rules. However, the considerable margin he had on Isaakyan still allowed him to end the season in third place. The Sahara Formula One Force India third driver will be on-track in the FIA WEC Rookie Test, together with Champion Fittipaldi and runner-up Isaakyan. After the award ceremony, the teams will participate in the End of The Season Test Days on Monday 20th November and Wednesday 21st November.

Race day basically started yesterday, when we set the pole position. I had a good start and the pace was great as well. I went out after the pit-stop in first so I cruised to victory which gave the team the championship crown. Congratulations to them, as in these two years we’ve been able to write the story of this series

Congratulations to the team for the title, to Rene for the win and to Tatiana as well for the podium. We had a decent start, I tried to attack and push from turn 1 and during the pit-stop as well, but in the end it was not enough. Thanks to all the team and Escuderia Telmex as well, this was a great season

“I’m really happy to celebrate on the podium in my maiden weekend. It has been an amazing experience with such a big car, the night race, the pit-stop and the heat. The team did an amazing job at the pit-stop and today’s one is a special result with all my family here. I want to thank EscuderÃ­a Telmex for supporting me not only throughout my career, but especially during this race.