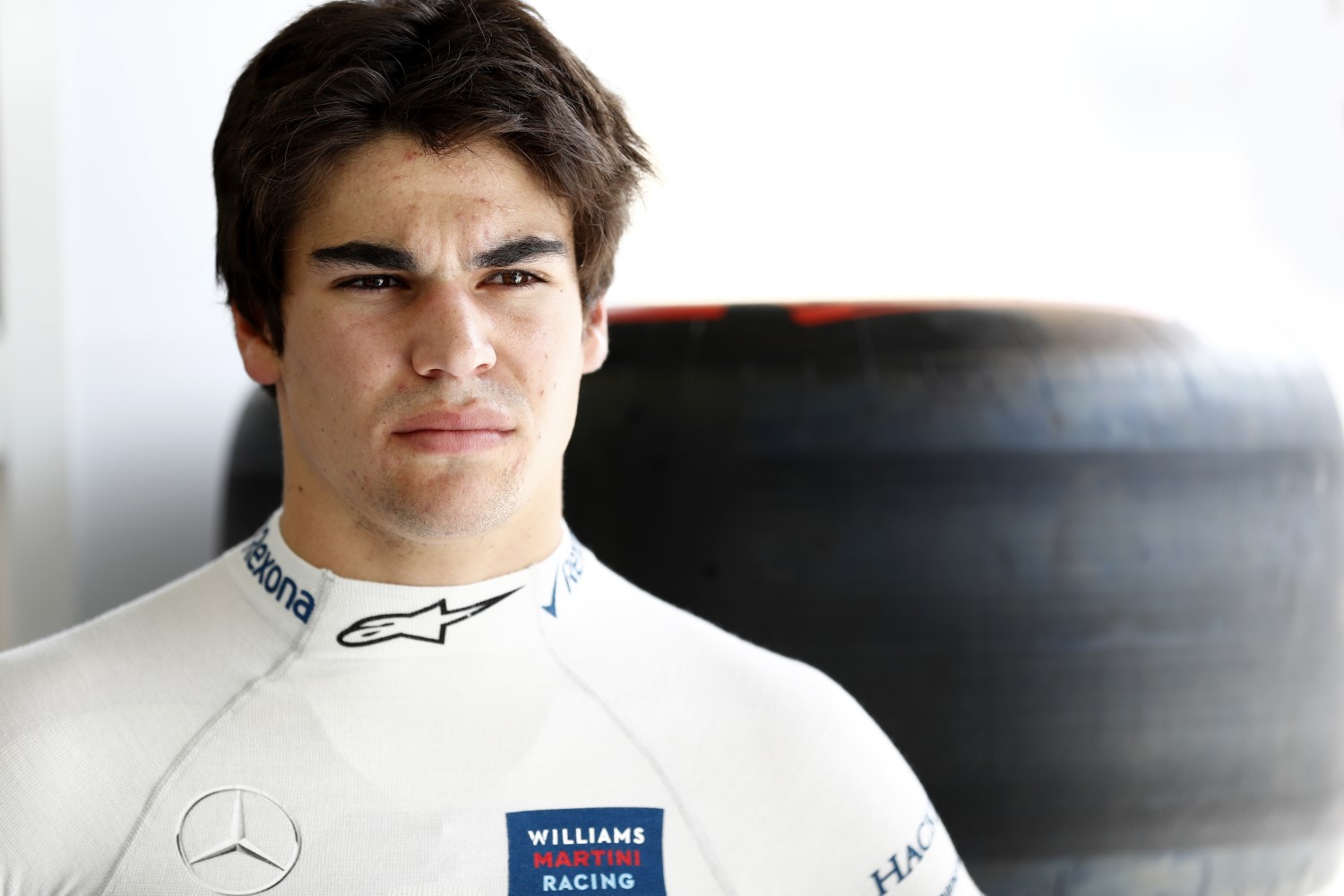 Stroll not listening to 'haters'
(GMM) Lance Stroll says he would give himself "8.5 out of 10" for his rookie season in F1.

Actually, the 19-year-old rookie has been roundly criticized this year, including by 1997 world champion Jacques Villeneuve who doesn't think Stroll has improved.

"Looking at the season, I have to say there have been very challenging times. Especially at the beginning," said Stroll, whose billionaire father Lawrence brings substantial backing to Williams.

"There were also some great times," Stroll insisted. "I was on the podium. I was on the front row."

Germany's Auto Motor und Sport asked Stroll to give himself a mark for his season out of 10.

"We had a really good season, scoring a lot of points," said Stroll. "A 9 would be too good though."

Asked if qualifying was a particular weakness for him in 2017, Stroll answered: "I can improve everywhere. Many little things.

"I was often unlucky in qualifying, but other times I can certainly improve myself as well. I can certainly become a more complete and better driver. But it takes time and experience. This was just my first season," he added.

Stroll – mentored by Felipe Massa this year – will get a new teammate for 2018, and Villeneuve has suggested the Canadian will hoping whoever it is will be "slower".

"I don't focus on what is said or written about me," Stroll insists.

"I do not read the newspapers or listen to the jealousy and the haters. It's been important to keep a cool head."

The criticism, though, has often been relentless, but Stroll insists he has never doubted himself.

"No. I am young, it's my first season," he answered. "I won everything until formula one. I have proven to myself and the world that I can win races and championships.

"This is just a new job and a new series. I have to adapt and to grow."

(GMM) Paddy Lowe says he is focused on making the Williams a "faster car" for 2018.

After years of success with McLaren and Mercedes, the Briton and technical expert is now a shareholder and boss at Williams.

But following a brief renaissance, the once-great British team has more recently slumped again to fifth in the world championship.

Lowe, however, sees brighter times ahead.

"It's been a good year with some interesting challenges," he told France's Auto Hebdo.

"Getting familiar with the team, facing some difficulties specific to the middle teams compared to the ones at the front, is a new experience," Lowe added.

He insists that Williams is still a good F1 team.

"Williams is a good team, often setting the standards in pitstops for instance and our way of operating," he said.

"On the other hand, we need a faster car," Lowe admitted.

"We have the ambition to move forward and win again. That's why we're here."

He said Williams is currently hard at work on the 2018 car, including integrating the controversial Halo protection system.

"It's an important project, with an impact that is more structural than aerodynamic," Lowe explained.

"Making the right decisions for next year's car is an important project for the coming months. We'll see what we can learn from this year," he said.

Hamilton happier today than a decade ago

(GMM) Lewis Hamilton says he is so much happier today than he was at the beginning of his F1 career.

The Briton has just wrapped up his fourth drivers' title, telling the Italian magazine Sportweek that he is happier at 32 than when he entered F1 a decade ago.

"When I think of how I felt years ago, I imagine being tied up and unable to move.

"It was enough for me to be in F1 and I told myself it was the best job in the world. But outside the car I didn't feel right, I didn't feel complete," Hamilton said.

"I was only using 10 per cent of my potential."

He won the title in 2008 but later switched to Mercedes and allowed his personality to flourish. He now jets all over the world, dabbles in music and fashion and mingles with celebrities.

"We often forget that we don't live forever and that life is short," Hamilton insisted. "And I don't like to waste a minute.

"I'm scared I will miss something, so I make my days very long."

(GMM) Zak Brown has given the strongest sign yet that Fernando Alonso will be allowed to contest next year's fabled Le Mans race.

"In an ideal world, we would love Fernando to win the triple crown in a McLaren," said the British team's boss.

"He's won Monaco, I think we will go back to Indy one day and Le Mans is something we're looking at," Brown is quoted by El Mundo Deportivo.

However, McLaren is not yet ready for a Le Mans foray, which explains rumors Alonso is ready to sign up with Toyota for a LMP1 tilt in 2018.

"In the meantime, if he wants to get some experience at Daytona and Le Mans, we're open to that," Brown admitted.

(GMM) Honda thinks there is "room" to negotiate with F1's owners about the future of the engine regulations.

Ferrari, Mercedes and Renault have made clear their unhappiness with the way Liberty Media announced its unilateral plans for a new engine formula for 2021.

Honda, however, has been silent, focusing instead on the end of its ill-fated works McLaren project and the switch to Toro Rosso for 2018.

Boss Yusuke Hasegawa admitted Honda made mistakes at the beginning of the 2017 project, leading to the McLaren divorce.

"From last year to this year, we completely changed the concept of the engine and tried to do a little bit too much," he admitted.

"That's why we have decided to keep the concept for next year, so that from a reliability point of view we are pretty much confident," Hasegawa added.

"Now we need to squeeze more performance from the same concept of the engine, which is what we are currently doing."

As for the 2021 engine rules drama, amid which Ferrari is threatening to quit F1, Hasegawa-san is more quiet.

"Obviously we have started the discussion with the FIA so I don't think it's a good idea to say yes or no in the public," said the Japanese.

"But of course we are respecting the FIA's decision, as they are trying to create a good competition for formula one.

"We are thinking there is some room to modify, so we are trying to find a good solution. Obviously the cost reduction is very important and we are welcoming new manufacturers, so from that point of view we would like to keep

Sebastian Vettel has described the 2017 season as "very positive" in Ferrari's push to return to title-winning ways, while reiterating his desire to "dominate" Formula 1 with the manufacturer in the future.

Vettel and Ferrari challenged Lewis Hamilton and Mercedes for both championships early in the campaign, but fell away amid a disastrous run of Asian events.

Mercedes duly secured a fourth successive title in the United States, with Hamilton following a week later in Mexico, meaning Ferrari's title drought will stretch into a 10th year.

Vettel, though, bounced back with victory at last weekend's Brazilian Grand Prix, bringing his and Ferrari's win tally for the season to five, its best since 2010.

Despite missing out on this year's title, Vettel remains optimistic for coming seasons.

"I think it was very positive this year," said Vettel, who recently committed to Ferrari through 2020.

"We made the biggest step, there was a lot of talk about other people, but we were there from the start and also until the end – I think there are a lot of positives.

"Of course, if you miss out it sort of sucks, there's no other way, but you have to be fair as well.

"Even if you look at the chance that maybe you missed, you have to give credit to all the people, to all the team for the step that we made.

"I think we can all feel that we're getting stronger, so hopefully we can carry that strength into the next couple of years, not just next year, not just the winter, but also the future.

"I think our objective is to bring Ferrari back properly, get there and dominate."

Ferrari last won a title in 2008, when it claimed the Constructors' crown, while Kimi RÃ¤ikkÃ¶nen remains the Scuderia's most recent Drivers' champion, with his 2007 triumph.