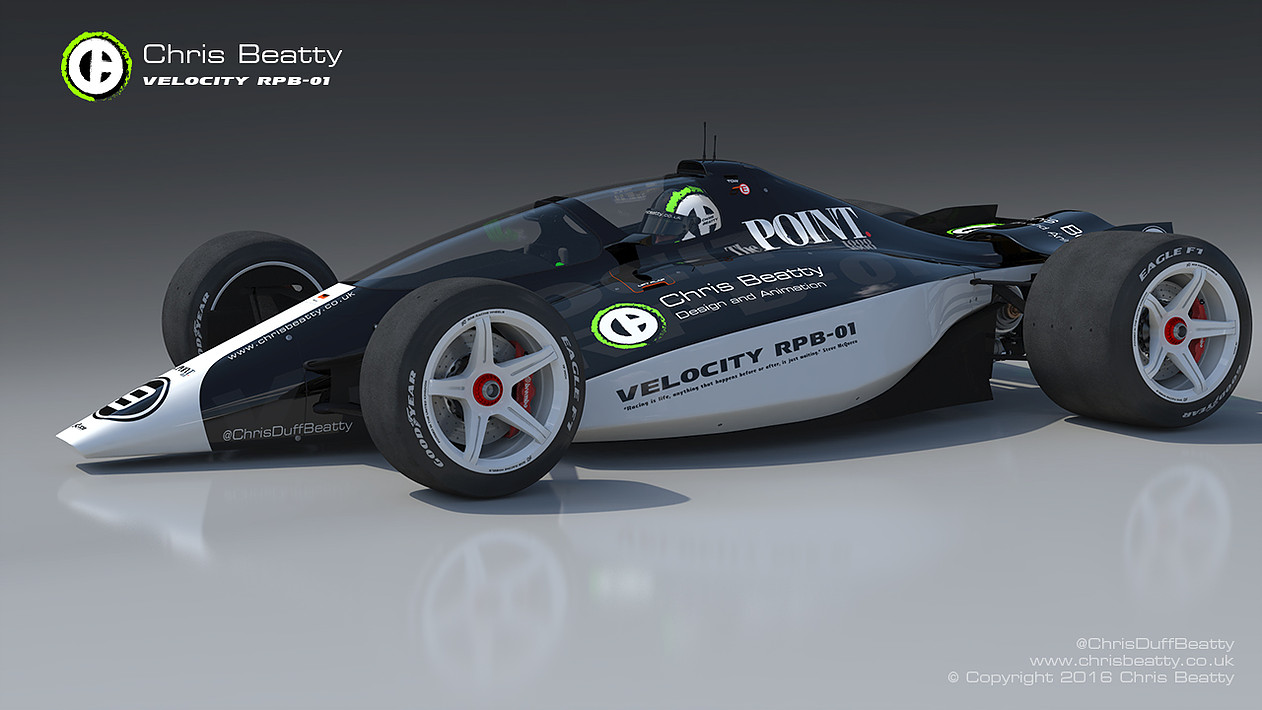 The Verizon IndyCar Series will kick off a fresh season on March 11 in St. Petersburg, Florida, an event that will be accompanied by a new era writes Tanner Watkins of Open-Wheels. Departing are the aero kits introduced in 2015, designed to inspire creativity and uniqueness between Chevrolet and Honda teams. In concept form it was a splendid idea met with rave reviews, until the operation became a money pit of sorts while cluttering an already “bit-happy" machine. In its place steps a beautifully reconfigured race car that has finally brought the IndyCar community together for a change.

The UAK18 (Universal Aero Kit 2018) is a redesign of the original Dallara DW-12 chassis implemented prior to the 2012 season. Centered on safety, the DW-12 utilized input from the late Dan Wheldon and introduced an era of racing IndyCar had yet to experience. The car’s debut in the Indianapolis 500 did not disappoint, setting the record for most lead changes in consecutive seasons. This included 2013, when the top spot changed hands 68 times before Tony Kanaan reached the checkered flag first. Since its inception there have been at least 34 lead changes in each Indianapolis 500 – certainly the most entertaining on-track product Indy has produced following “The Split."

Even with this list of accomplishments, the car has been far from perfect. Fans regretted some of the safety innovations aimed to protect drivers and spectators alike, such as the rear wheel pods. Designed to keep cars from touching tire-to-tire – therefore decreasing the chances of airborne accidents – the pods served as the most radical change to an IndyCar since the implementation of an engine airbox. While they quickly became an eyesore to open-wheel traditionalists, drivers lamented the performance of the car and its tail-heavy drive.

In testing of the new machine, Ryan Hunter-Reay described a feeling of numbness when putting the DW-12 through its oval paces. Four-time series champion Scott Dixon was equally concerned at a Fontana test, citing an aggressive oversteer on turn-in that continued through the corner’s midpoint. After further review, IndyCar and its chassis manufacturer Dallara pinpointed weight distribution as the car’s weakness – something that was fundamentally incurable without a complete redesign of the car.

The Italian manufacturer labored to improve that distribution problem by adjusting the front suspension layout, aiming to balance the ratio of weight between the nose and tail ends of the car. The previous Dallara IR-05 chassis carried a 45/55 balance of weight – 45% on the front of the car and 55% on the rear. Dallara’s new DW-12 dangerously shifted that ratio to 59% in the rear and only 41% on the nose, causing the loose conditions echoed by Dixon and Hunter-Reay.

Fast forward to 2016 and new excitement is on the horizon. IndyCar, recognizing the swelling costs to develop, test and manufacture unique aero kits, has now begun work on bringing spec racing back to the series. Introduced in November of that year, Chris Beatty joined the IndyCar production team as a consultant working with Tino Belli, IndyCar’s director of aerodynamic development.

Chris, a motorsport fan since the age of 12, is a design consultant that works with clients in racing, pharmaceutical production and even power tool manufacturing. His day-to-day work focuses on the engineering and scientific sectors that can be used to refine or develop design ideas through animation. These animations help explain the principles behind a client’s products or systems. He hails from the United Kingdom and gained notoriety in the motorsport world after his introduction of the Velocity RPB, an open-wheeled race car that features a closed cockpit and some beautiful bodywork.

Citing a love for open-wheel machines from the 1960s and 70s, Beatty had become “disenchanted" with the current design directions of single-seat racers such as IndyCar and Formula One. Placing an emphasis on mechanical grip, he aimed to generate a car that would be a joy for drivers to wheel and more spectacular for fans to watch. In steps the Velocity RPB.

A modern mirror to those sleek cars of the 1960s and 70s, the Velocity RPB is Chris’ solution to both an aerodynamic pit that motorsports has fallen into, and the safety concern surrounding open-wheel racing. Beatty states that as the project developed, a canopy for the driver became an important element of design for the radical race car.

“I was present at Brands Hatch in July of 2009 when Henry Surtees sadly perished, and so (I) wanted to include some sort of protection for the driver. Initially this was a styling exercise, but it became even more important following a trip to Pocono Raceway in August 2015 for the IndyCar race. There I witnessed Justin Wilson’s accident from the far side of the circuit which had a profound effect and cause me to put far more effort into the screen design than I had planned to."

The Velocity RPB concept allowed Chris’ ideas to be recognized by members of the racing community, and later led to his inclusion on the 2018 IndyCar development team. He was able to connect with Justin’s younger brother Stefan Wilson through the Velocity RPB’s promotion, and Stefan later showed the concept to the team at IndyCar. Building a rapport with the IndyCar staff, Beatty began working on some early concepts for cockpit protection plans when he caught wind of the 2018 IndyCar universal aero kit project.

“I heard about the 2018 project and asked my contacts who was running it. I was given Tino Belli’s details and wrote him an email asking if I could get on the project," wrote Beatty. “The initial response was that it was an engineering/aero project and there was no requirement at that stage for a concept designer, but a month later I received a message from Belli asking my opinion on some renders the manufacturer had sent of where the car was up to at that point."

At this point in the process, Beatty recalled that the engine cover had already been lowered and the rear pods had been removed. After review of the car in that state, Chris proposed some changes that would sweep the speedway front wings back while extending the front side pods forward in a more aggressive manner to promote an image of speed. Additionally, the roll hoop behind the driver’s head was leaned forward to give the top of the car a more aggressive silhouette.

As it has been previously noted, IndyCar had a couple main boxes to check in regards to a new aero kit design: reduce the reliance on top side aerodynamics and create a significantly improved car visually. By eliminating some of the cluttered bits from the previous aero kit era, it reduces the amount of potential carbon debris resulting from accidents. This makes racing safer and jettisons that bulky, unathletic look that has stemmed from aerodynamic wars in modern racing. Also, it is important to note that with the elimination of the rear wheel pods, the weight balance discussed previously has been shifted closer to the ratio seen with the IR-05 chassis that preceded the DW-12. This will create a more nimble, balanced race car.

For Beatty, the significance of collaborative communication was made apparent from his inclusion starting back in November 2016. “Throughout the whole process, there was an awful lot of back-and-forth interaction between IndyCar and Dallara. Both (Andrea) Guerri (Dallara in-house stylist) and I spent a lot of time bouncing ideas through Tino Belli, Bill Pasis and Dallara’s aero team to further refine the look of the car and get the aesthetic vs. aero/engineering balance right."

While he joined the design team as a consultant initially, Chris took on more of a hands-on role as the project progressed. When Guerri produced the initial sketches that the public saw at the Detroit Auto Show in January, the team was well into the 3D mock-up phase of the project.

“Jay Frye (IndyCar director of competition) showed some of this development material to the teams and drivers at the time," said Beatty. “The car was probably 90% there and the speedway configuration was starting initial CFD and wind tunnel testing at Dallara. The only main items still being worked on from a concept perspective were the road course wing and rear tire ramps." It must be noted as well that the car was still being refined technically, working through issues from a mechanical/manufacturing point of view.

Citing an example of interaction between the creative parties, Beatty recalls an adjustment that had to be made to the car’s aerodynamics before on-track activity commenced. When speaking to the speedway rear wing design, he notes that the team encountered issues when testing what was a visually-pleasing piece but not a strong wing from the aerodynamic performance standpoint.

“Initially we had a wing with a larger chord, as seen in some of the earlier 3D renders released by IndyCar. This looked great, but when tested in the wind tunnel it was found to put too much drag into the balance of the overall package. We had to redesign it with a smaller profile to hit the aero targets." It were little changes and discussions similar to this that shaped the entire project and car that you will see on track in 2018.

While IndyCar transitions into this new era, what can gear heads look forward to following this chapter of the DW-12’s life? Beatty explains that as far as he is aware, there are no plans to develop the universal aero kit further.

“The only exceptions to this would be if there is a requirement from a racing or safety point of view." When reviewing the project, Chris praises the Series’ current product. “The Dallara DW-12 is a sold, safe chassis and as long as the 2018 universal aero kit performs in a crowd the way we all hope, then it should be around for the next three years, at least."

While we can’t wait to see what is in store for 2018 and a brand new toy, the focus is always shifted forward. Could there be another radical change coming for 2021 and beyond?

“We will all just have to wait and see." Tanner Watkins/Open-Wheels