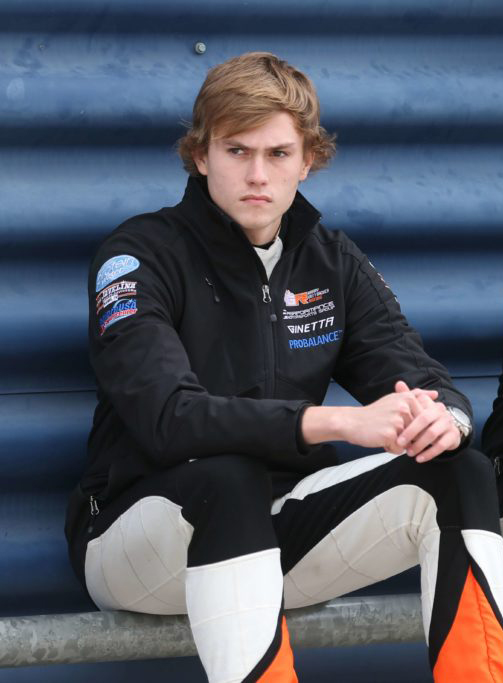 Racers Edge Motorsports announced today that Harry Gottsacker will lead their effort to win the Pirelli World Challenge Series GTS championship for 2018. After completing partial seasons in GTS the last two years, Harry is ready to commit to a full season and will drive one of the team’s bright red SIN R1 GT4 machines.

“I am extremely excited to say I will be teaming up with Racers Edge for the PWC 2018 season! The team is vastly experienced, and the SIN has proven to be extremely fast and competitive, no matter the track. I’m ready to start testing and as this will be my first opportunity to campaign a full season in one series, I plan to win races and take a run at the championship!

Racers Edge Team owner, Jon Mirachi recruited the young driver to head up the team’s effort after watching him drive this past season. “I think Harry is really talented and is ready to show what he’s capable of. Despite being only 18, he’s a mature racer and was my first choice to head up our team next season. Everyone at Racers Edge is looking forward to pre-season testing and to the working with Harry. After two seasons racing the SIN, it’s fully developed and competitive, so now with Harry we’ve got a great package and we’ll be ready for St. Pete!"

Racers Edge will run a two-car program in 2018, with the driver of the second SIN yet to be decided. The team is still looking at options for the second car.

ABOUT RACERS EDGE MOTORSPORTS: Racers Edge Motorsports has been preparing and fielding race cars for over 27 years and is the North American Distributor for SIN CARS. The Florida based team made the move to the Pirelli World Challenge Series in 2016 and over those two seasons has racked up 8 wins and numerous podium finishes.