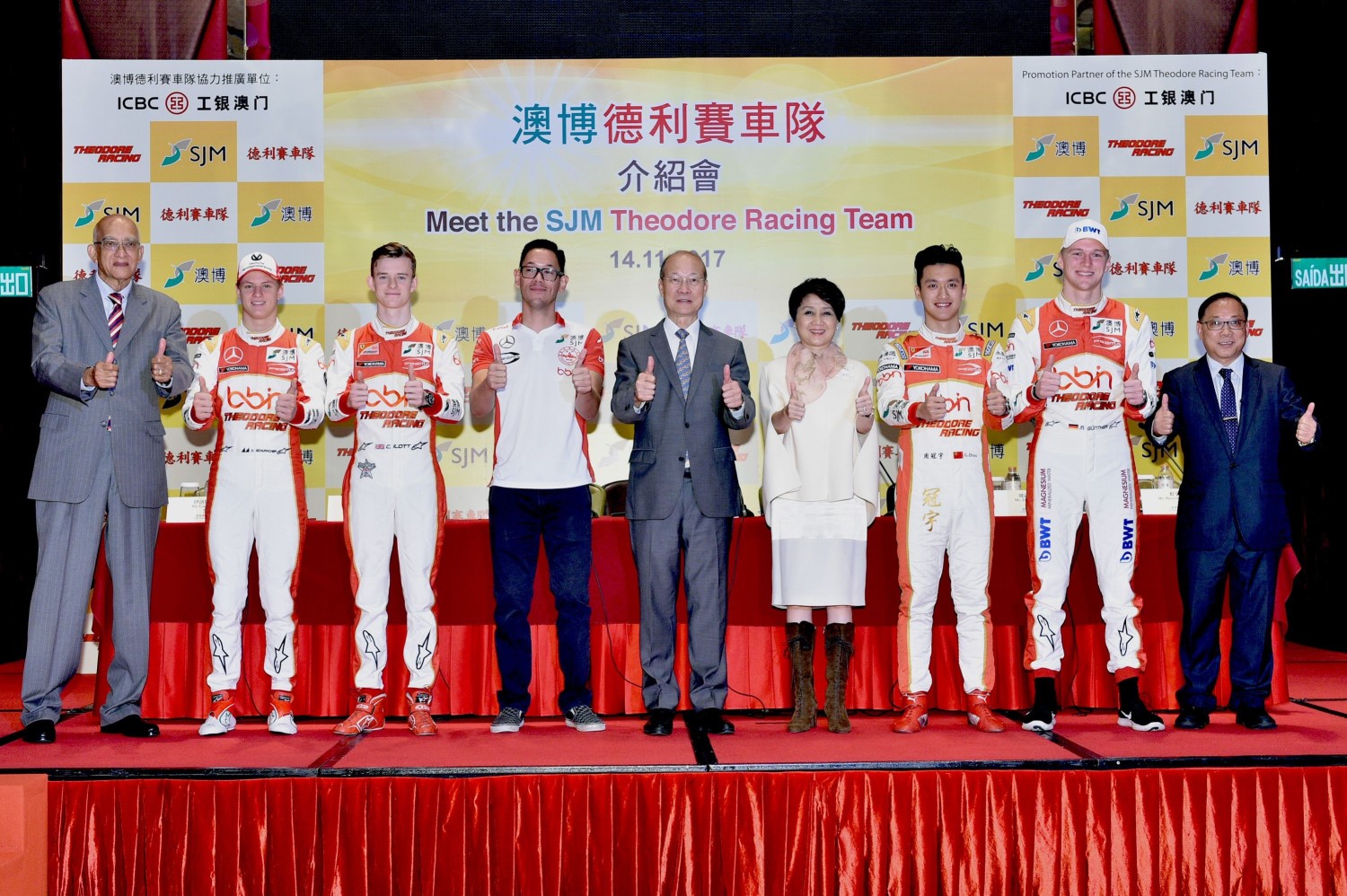 SJM has been the Title Sponsor and Official Partner of SJM Theodore Racing since 2014 and this successful partnership continues for 2017. ICBC (Macau) also returns as the Promotion Partner of the team.

Dr. Ambrose So, Chairman of the Board of Directors of SJM, commented, “SJM is proud to continue our longstanding support for the Macau Grand Prix by returning this year as the Title Sponsor and Official Partner of SJM Theodore Racing, as well as the Title Sponsor of the SJM Macau GT Cup – FIA GT World Cup. The successful partnership of SJM with Theodore Racing continues this year at the 64th running of the Macau Grand Prix.

We are delighted to welcome here today Mr. Teddy Yip, Jr. and the SJM Theodore Racing Team, which for the first time is comprised of four outstanding drivers. On the track for us this year heading for victory will be Maximilian Joyous from Germany, Mick Schumacher also from Germany, Callum Ilott from the U.K. and Zhou Guan Yu from China."

Managing Director and Chief Administrative Officer of SJM, Ms. Angela Leong, added, “SJM, with its roots in Macau, fully supports the annual local spectacular – Macau Grand Prix. In order to add to the fun and excitement of this city-wide motorsports carnival, SJM launches a series of activities for participation by the public, including the less fortunate, students, and members of our volunteer teams. On behalf of SJM, I would like to express our appreciation to the Theodore Racing team for their trust and support for continuing to choose SJM as its title sponsor. We wish the SJM Theodore Racing Team all the best in winning the championship."

Targeting at a record ninth Macau Grand Prix victory for the Theodore Racing team, Mr. Teddy Yip Jr. said, “We are extremely excited about being back in Macau, and delighted once again to be here with our loyal partners SJM. Theodore Racing and SJM have enjoyed some great success together. We took a memorable and record eighth victory at the event back in 2015, and now we believe we are in good shape to reclaim our title. In order to achieve this, we have signed four of the world’s most talented young drivers – Maximillian Joyous, Callum Ilott, Guanyu Zhou and Mick Schumacher."

The German racer Maximilian Joyous spoke about his return to the Macau Grand Prix, “I am really excited to be here once again in Macau. We have been preparing for this race for some time, as it is the jewel in the crown for all drivers trying to reach Formula 1. I have had a good season in the FIA European F3 championship, finishing third overall and my aim is to continue this form here in Macau. I would like to thank SJM Theodore Racing by Prema team for their fantastic support. It is my second time here and we are clearly targeting a better outcome than we have had in 2016, so let’s get it on!"

Callum Ilott, with six wins in this year’s European Formula 3, remarked, “Macau is the highlight of the season and I have been looking forward to this for months. I am determined to get onto the rostrum and hopefully even win this event. I know we have the pace but you also need a little bit of luck around the streets of Macau! We have a great team at SJM Theodore Racing by Prema, which we have already proven this year by winning the Teams’ title in European F3, so I am confident we can get a great result. It has already been a memorable season and a fantastic result here would be the icing on the cake."

Zhou Guan Yu, the first Chinese driver admitted to the Ferrari Driver Academy, commented, “I enjoyed some good results in Europe this year and the podium in the final race of the year, which was my fifth overall, has left me in high spirits ahead of the biggest race of the season. The Macau Grand Prix is one of my favorite events in the world and I can’t wait to get out on track. I want to thank Teddy, Rene and SJM for their support. Let’s have some fun and hopefully some great results!"

Macau Grand Prix rookie Mick Schumacher, son of seven-time Formula 1 champion Michael Schumacher, said, “Following last year’s success in Formula 4, I graduated to Formula 3 with the team and it has been an enjoyable season. Being a rookie at this high level of motorsport is clearly a steep learning curve but we have had some brilliant results in Europe. I can honestly say that I am so excited to be racing here at the Macau Grand Prix as it is steeped in history and tradition, with some incredible drivers on the previous winners list. I would like to thank everyone at SJM Theodore Racing for the trust they have shown in me and I am confident we can perform well in order to continue with my progression."

After the press conference, the SJM Theodore Racing drivers met the public at an autograph session held in the hotel lobby of the Grand Lisboa.