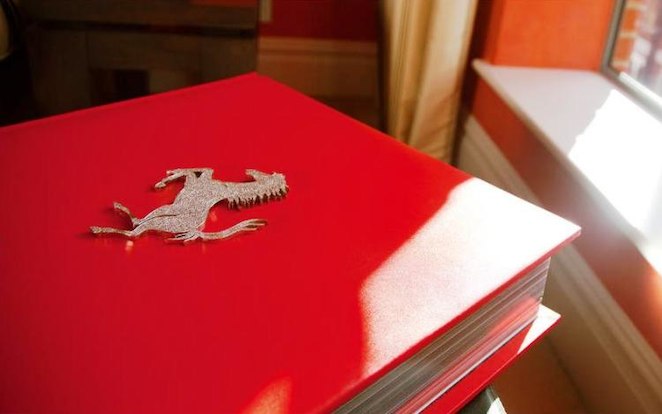 These days if you want to get yourself behind the wheel of a new Ferrari, you'll be looking at a good $200k. More if you want it now, maybe less if you're willing to buy second-hand.

In that context, $150,000 doesn't seem like an awful lot to pay. But as you can see, this isn't a Ferrari automobile. It's a Ferrari book.

Or rather a book about Ferrari, we should say. It's the product of UK-based Kraken Opus, which publishes high-end tomes for those wealthy enough to afford them.

The publisher came out with The Official Ferrari Opus in 2011, with 852 twenty-square-inch pages to weigh a total of over 80 pounds. The book was offered in several versions, ranging from the Classic edition (for “only" $4,100) to the Diamante edition you see here.

The top edition featured a red leather binding with a diamond-encrusted Prancing Horse emblem on the over, placed in a carbon-fiber clamshell case, and hand-signed by the Scuderia's drivers and the company's chairman at the time: Fernando Alonso, Felipe Massa, and Luca di Montezemolo. It even came with a set of white gloves with which to handle the pages.

Where the penultimate, $37,500 Enzo edition yielded 400 copies, the Diamante edition was limited to just one per country. That'd make for fewer than 200 examples, but we doubt the publisher actually sold one in each country. It charged $275,000 for each, which makes this one – apparently sold new to a customer in Belgium – seem like a relative steal.

Consigned for RM Sotheby's auction in New York next month, it's valued between $125,000 and $175,000, and is offered without reserve. Of course, you could get yourself a used Ferrari road car for about that much – even less if you go older with more miles – but something tells us that whoever might be bidding on this tome already has a Ferrari or two in the garage, and is just looking for the right one to put on the (hopefully sturdy) coffee table. carscoops