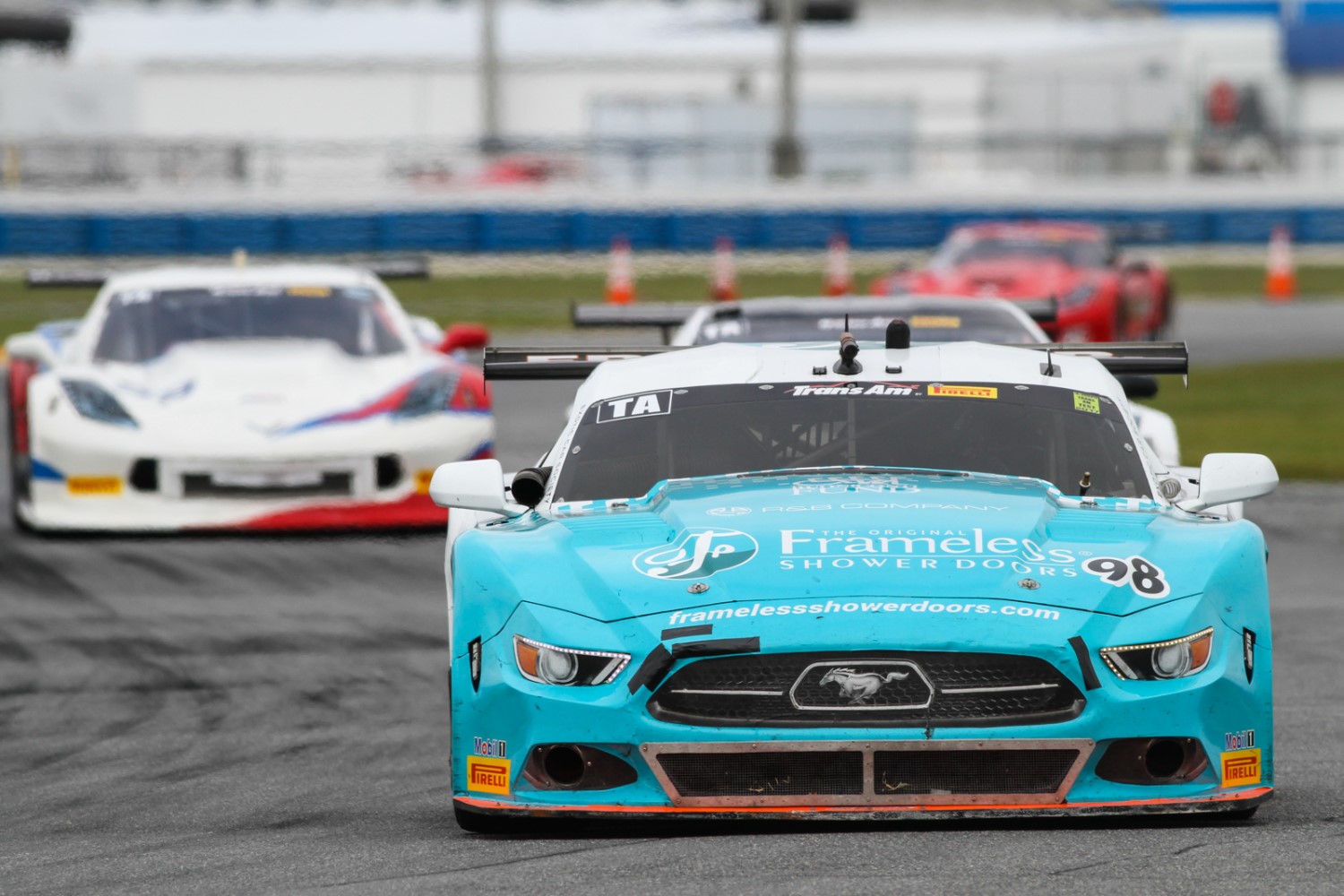 Ernie Francis, Jr., and Tony Buffomante captured the final pole positions of the 2017 Trans Am Championship presented by Pirelli today at Daytona International Raceway. Within the production ranks Lee Saunders secured his fourth consecutive TA3 pole at Daytona, while Ramin Abdolvahabi qualified pole for the TA4 class for his first career Trans Am pole.

For Francis, a Florida native and 2017 champion of the TA class, the pole marks his eighth of the season in this the 13th round. The lap, a 1:43.211 set from behind the wheel of the No. 98 Framelessshowerdoors.com Ford Mustang on the 3.56-mile course, was nearly a full second faster than the nearest qualifier.

Despite having the championship in hand and nine wins already to his name, Francis is still pushing the No. 98 for its tenth win of the season and is more than really for the challenge of the 103.24-mile, 29-lap Trans Am finale with all four of Trans Am’s classes running together, including the influx of TA2 which typically holds its own race.

“We’re excited for this race," said Francis. “This is one we look forward to all year long; it’s great to be out here for the Classic 24 with HSR. This car is awesome out here at Daytona; it’s one of the only tracks where we can get near the car’s top speed. We’ve got pole today, so we’ll see how tomorrow’s race goes. We’d like to round our nine wins up to ten. I think traffic is going to play into the race a lot. We’re not going to be able to run full bore all the time; with the TA2 cars they’ll be running in packs as we come to them. We’ll play it by ear and hopefully use it to our advantage; I’ve got a lot of experience running in traffic with different series, so I think we’ll be all right and work our way through it."

Starting alongside Francis will be Vinnie Allegretta, in the No. 41 TA Sights & Sounds Chevrolet Corvette, a return to form for the 2017 TA runner-up and his highest starting position since Round 7 at Mid-Ohio Sports Car Course. Allegretta turned a 1:44.166 lap during the qualifying session.

Third quick in TA qualifying was Tomy Drissi, in the No. 8 Murder on The Orient Express Chevrolet Corvette, who turned 1:44.680, after a remarkable effort from the Ave Motorsport team to repair the No. 8 after an incident in Practice 1 that left it in need of major repair, missing the second practice session.

The TA qualifying top five was completed by Jim McAleese, in the No. 03 McAleese and Associates Chevrolet Camaro, who tied his highest starting position of the year, and Amy Ruman, in the No. 23 McNichols Company Chevrolet Corvette, winner of the past three TA class competitions at Daytona. McAleese logged a 1:44.763 in the session while Ruman would turn a 1:44.763.

After a disappointing outing at Circuit of The Americas that saw the No. 34 Bestline Superior Lubricants Ford Mustang knocked out of TA2 title contention following contact from behind, Tony Buffomante rebounded in style securing the TA2 class pole for the third consecutive time at Daytona, this time with a 1:50.412 lap.

Now sitting third in the TA2 standings by a mere five points, Buffomante, the 2016 champ, and the Mike Cope Racing Enterprises team are eyeing a strong finish to their 2017 campaign.

“It’s incredibly important for us to finish strong," said Buffomante. “The guys got dealt a pretty big blow last week at COTA, through no fault of our own; we got taken out and it really hurt the car pretty bad. They’ve been working on the car nonstop; we didn’t even participate in the test day on Wednesday. To get back in action, even though she’s a little bumped and bruised, it means a lot to me to put the car on pole–their hard work paid off. We’re just trying to finish strong and raise the banner for Mike Cope, Ford, and Wilwood–and hopefully have a little fun along the way."

The fact that the 19 TA2 class competitors will take to the track in multi-class competition does not faze the road-racing veteran; in fact, he looks forward to the challenge.

“It’s going to be old school multi-class racing out there," said Buffomante. “It’s going to be fun; I’m really looking forward to it. It adds an element of strategy to it. Going through the TA traffic, if they’ve got some issues, is going to be challenging and of course coming around on the other cars as well. I’m going to try and find some clean spots and pick up some drafts where I can from some of the faster cars and hopefully that’s enough to get us away, but I doubt it. Everyone’s too close, I was listening to the laps come over the radio; they’re all within half a tenth or a tenth of each other. I don’t expect anyone to run away with this thing."

Starting alongside Buffomante will be TA2 debutant Josh Bilicki, in the No. 25 BC Race Cars Chevrolet Camaro, as he makes his first career Trans Am start. Bilicki would turn a 1:50.583 lap, just edging the 1:50.596 set by 2017 TA2 champion Gar Robinson, in the No. 74 Pura Vida Tequila Chevrolet Camaro, who will start third in class.

In TA3 it was another Florida native who secured a class pole with Lee Saunders, in the No. 84 Landsearch LLC Dodge Viper ACRX, turning a 1:52.273 lap. The pole is Saunders’ fourth consecutive in TA3 at Daytona International Speedway; however, out of his three previous poles, only 2016 has resulted in a victory for the No. 84.

In TA4, Ramin Abdolvahabi, in the No. 2 DaVinci Plastic Surgery Aston Martin Vantage GT4, captured his first career Trans Am pole with a 1:57.379. Abdolvahabi, previously a TA3 competitor, is featuring in the No. 2 this weekend in lieu of Steven Davison, currently serving suspension for incident contact.

Trans Am will return to the track tomorrow, Saturday November 11, for the 2018 Trans Am Finale at 10:15 AM ET scheduled for 103.24-miles, 29-laps around the 3.56-mile course at Daytona International Speedway.