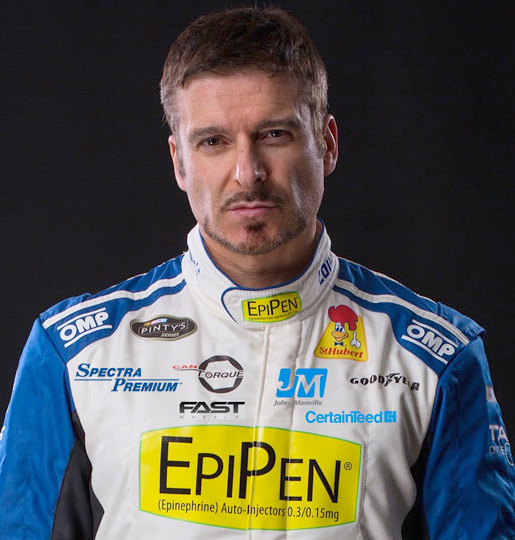 22 Racing is pleased to announce today that Alex Tagliani will be back with them in his #18 EpiPen/Lowes/St-Hubert/Spectra Premium sponsored car in 2018. This will be the fifth year of partnership in the NASCAR Pinty's Series between Tagliani and 22 Racing.

Alex has just wrapped up his Teal Pumpkin Project, a Halloween focused initiative to promote Food Allergy Awareness. The campaign saw him drive his #18 EpiPen/Lowes race car through the streets of a suburb of Montreal helping to raise awareness for this very important issue one which he suffers from with his severe nut allergies.

“Alex is a fierce competitor and is always working hard to improve himself and his team," said team owner Scott Steckly. “We look forward to seeing Alex on the podium with checkered flags again in 2018."

“I’m very excited to be back with 22 Racing next year," said Tagliani. “It will be five years together as a team, so it is like a big family now and I enjoy working with the crew as they have become my friends. They are a reflection of Scott who is a great guy and a fantastic team owner and we have done a lot together. We have managed to break a track record in NASCAR by lapping the entire field on an oval track and we finally won GP3R together with Tyler Case as my crew chief, something he wanted to do for a long time as well.

"In motorsport everybody is seeking for continuity and stability and I think we have managed this with the help of amazing sponsors like EpiPen, Lowes, Spectra Premium & St Hubert so we are excited to be able to continue our race program. 2017 was not the season we wanted because after the 2016 season having run for a championship we had high hopes. We had a lot of bad luck this year. We didn’t capitalize on the races we were strong as I made 2 mistakes, so not a clean season but I think we have the potential to run strong. It should be an exciting winter knowing we are going to push hard for a championship in 2018. There is still more news to come but exciting day when you know you are going to work with the same group of people again."

The 2018 schedule has not been released yet, but one event has been announced and it will see the NASCAR Pinty’s Series make its debut outside of Canada at New Hampshire Motor Speedway tentatively on Sept. 20 & 21, 2018.