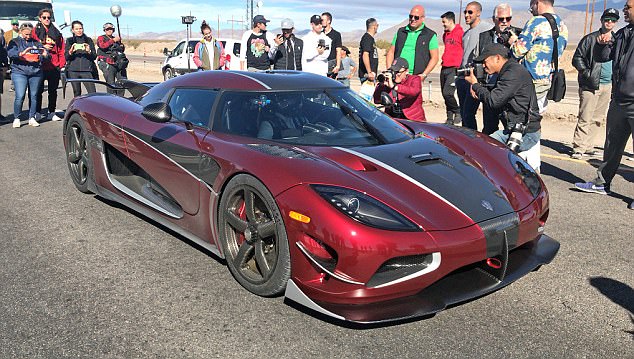 The world of cars has a new top trump after the Koenigsegg Agera RS smashed the record for the world's fastest production car.

The Swedish car maker snatched the crown off French powerhouse Bugatti on Saturday with two blistering speed runs down a highway in Nevada.

The Agera RS clocked an average speed of 277.9mph over the two runs, easily beating the 2010 record of 267.8mph that was set by a Bugatti Veyron Super Sport.

On its first run the Koenigsegg registered a top speed of 271.2mph, beating the Veyron even while battling an incline and oncoming winds.

During the second run – going slightly downhill and with a favorable tailwind – the car clocked a top speed of 284.5mph, the fastest a production car has ever gone.

That record had been held by a Hennessey Venom GT which was recorded at 270.5mph in 2014.

Hennessey failed to take the speed record, however, because the car only completed one run and the title-holder is required to make two runs down the same stretch of tarmac in opposite directions.

Koenigsegg's record is particularly impressive because it was completed not only in a production car, but down a section of public highway using 'standard' tires.

The owner of the Agera had used his connection in the film industry to convince Nevada authorities to shut down an 11-mile stretch of Highway 106, which runs between Las Vegas and the town of Pahrump, Top Gear reports.

The test was then carried out using Michelin Pilot Sport Cup 2 tires which are the tires the Koenigsegg is sold with and are authorized for use on the road.

Koenigsegg now hopes to prove their car is also the fastest around corners, raising the prospect of a run at Germany's Nurburgring

'Driving the road at 100mph, it was very quiet and smooth. But at 280mph plus, it’s really quite bumpy.'

Asked what was next for the car, he added: 'Of course we want to prove it's quicker than anything else in the corners too.' Chris Pleasance for MailOnline