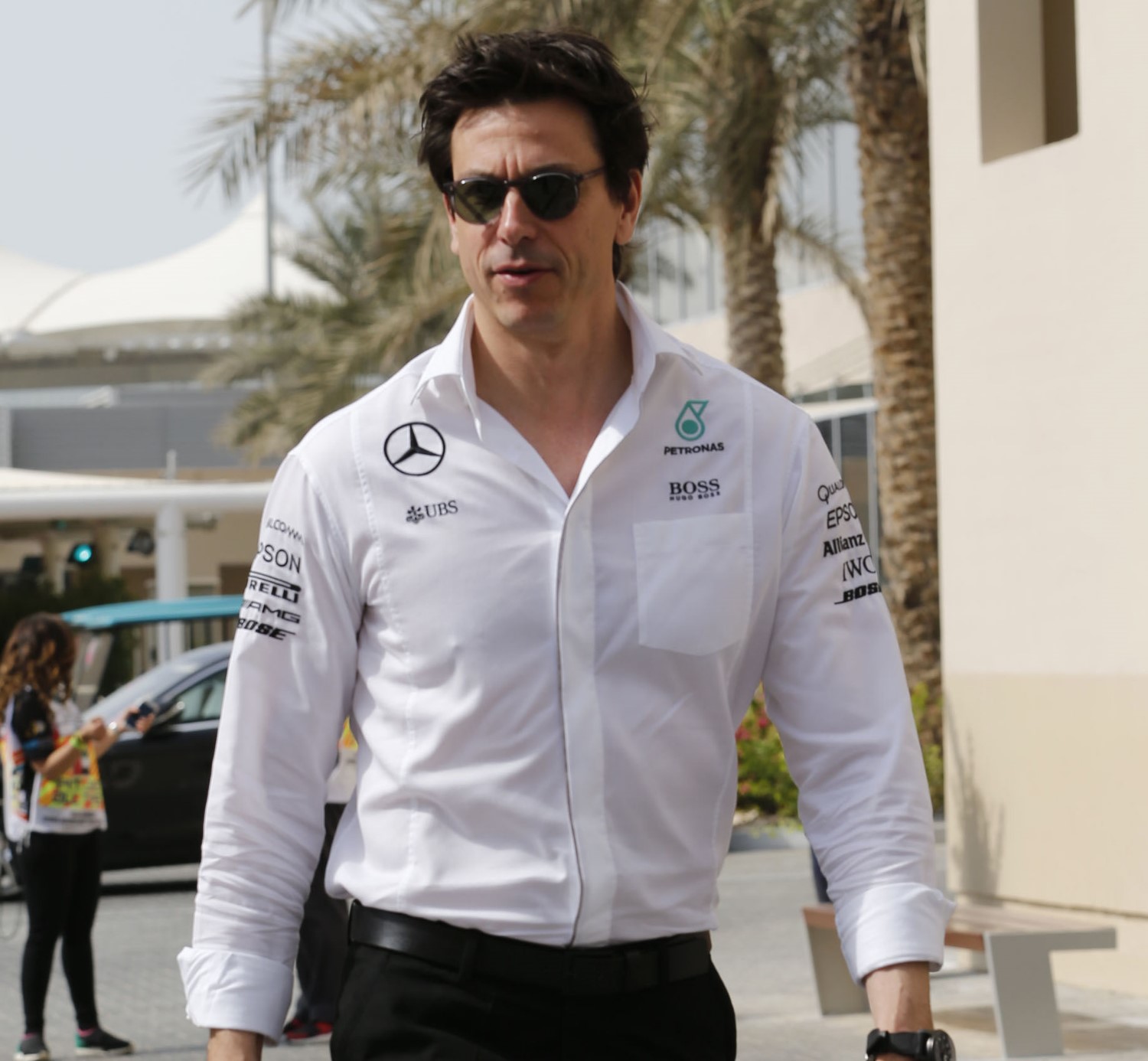 Mercedes, Ferrari hit back at Liberty plans
(GMM) Top teams Ferrari and Mercedes are pushing back against Liberty Media's plans to modernize formula one.

Ferrari is threatening to quit the sport after new F1 owners Liberty announced their intention to substantially change the engine rules for 2021.

"If the regulations come out where Ferrari think it is going to be a struggle and they can't support the money then they will leave," he told F1 business journalist Christian Sylt in the Independent.

And the top two teams are also set to hit back against the plans for a EUR 100-150 million budget cap.

Those plans are to be unveiled by Liberty Media early this week.

"We are curious to see what we are presented with," Mercedes boss Toto Wolff told Bild am Sonntag newspaper.

It is believed that, to police compliance with the cap, the proposal will involve FIA accountants being embedded within each F1 team.

But Wolff insisted: "Nobody will get insight into our internal structures and processes."

Ecclestone thinks Ferrari will also not accept a budget cap.

"They want to spend what they can afford to spend and I've always said the same thing. If people can't spend they have to go," he said.

Bild quoted Ferrari president Sergio Marchionne as saying he is ready for a fight.

"I expect there to be a dispute until there is a solution," he said.

No 'excuse' for being behind Verstappen – Ricciardo

(GMM) Daniel Ricciardo says he has no "excuse" for being regularly humbled by his young teammate Max Verstappen this year.

Although Verstappen has had the lion's share of the poor reliability at Renault-powered Red Bull this year, it is the Dutchman who has been shining the brightest recently.

"I do not give any excuses," Australian Ricciardo, who according to team official Dr Helmut Marko is "on the market" for 2019, told the Dutch source Formule 1.

"Max is just driving brilliantly this year and knows how to get the most out of the car in every race."

Nonetheless, Ricciardo is over 40 points ahead of Verstappen in the drivers' championship.

"Max has had a lot of bad luck and I have no explanation for why.

"I have asked the engineers if it could be because of him, but Max is not too rough with the equipment. It's just pure bad luck," he insisted.

(GMM) Nico Rosberg has once again dismissed any claims he might be thinking about returning to F1.

Days after winning his 2016 title, the German decided to quit the sport completely and Rosberg now says he is still happy with his call.

"A comeback is out of the question," he is quoted by DPA news agency.

"I achieved everything I wanted to and my new life is going in exactly the right direction," Rosberg added at an event in Frankfurt.

"I miss nothing — I've completely finished with racing," he said. "Now I like to enjoy the races by watching them."

Once a bitter rival of Lewis Hamilton, Rosberg says he has no problem sincerely congratulating the Briton for winning his fourth career title.

"I'm not competing with him anymore so that makes it easier for me," he smiled.

"He deserves to be successful because he had a great year," Rosberg added.

However, F1's governing body has had to rush to repair damage to the official drivers' championship trophy, which will soon be passed into Hamilton's hands after a year in the custody of Rosberg.

"I got a message from the FIA saying 'What happened to the trophy?" Rosberg admitted to the broadcaster NDR.

"Apparently there was a dent so I apologized and now they're solving it somehow," he added.

(GMM) Sergio Perez has admitted he was impressed by the performance of his rookie Force India teammate Esteban Ocon this year.

The pair will line up for the Silverstone based team again in 2018, despite a recent ban preventing them from racing one another after a series of clashes.

Mexican Perez told France's Auto Hebdo he was "surprised" by the French youngster's "level of performance" in 2017.

"I did not think he would have such results in his first year," Perez, to contest his eighth consecutive F1 season next year, said.

"Even with a difficult car, Esteban still manages to go fast. That's one of his strengths and I have to learn from that," Perez admitted.

"Recently, he has also managed to improve a lot in qualifying, but for me it's good to have a teammate to push me to my limits. Because in today's F1, your teammate is your only reference.

"The three teams in front of us are untouchable," Perez, 27, added.

"If Sergio does not push his limits, Esteban will become the number 1," Ramirez, who like Perez is Mexican, said.

"The internal competition is good for Sergio, but he absolutely must succeed because this business is unforgiving," he added.

"Sometimes I wonder what Valtteri Bottas is doing at Mercedes, because he is clearly not at the same level as Hamilton. Especially when Esteban is also a Mercedes driver," said Ramirez.

Pirelli to introduce sixth tire in 2018

(GMM) Pirelli is planning to introduce a sixth tire compound for 2018.

Auto Motor und Sport said the new, extra compound – a sort of 'ultra ultra-soft' tire – will be at the softest end of the official F1 supplier's range.

But it is suggested that all the current compounds will be a step softer next year.

"The new tire and the softer compounds are badly needed," a team member is quoted as saying.

Also being discussed at present is how tires will be allocated to the teams.

Some are arguing that teams should get free rein to choose from any of the six Pirelli compounds at each race.

But Pirelli's Mario Isola is not convinced.

"With free choice, the top teams would choose harder compounds and still get into Q3 and then have a clear advantage in the race," he said.

However, others argue that if there is free choice, smaller teams will be able to select aggressively soft tires and qualify artificially high up the grid.

(GMM) The driver market is still simmering at the tail end of 2017.

Over the weekend, Felipe Massa announced his second and final retirement, with Robert Kubica, Paul di Resta, Pascal Wehrlein and Daniil Kvyat in the mix to replace him.

But the next announcement is actually expected to come out of McLaren, who are replacing Jenson Button as the official reserve driver.

New European F3 champion Lando Norris, 17, is expected to get the job, with McLaren executive Zak Brown saying he is a Max Verstappen of the future.

"In the Hungary tests, I've never seen a driver with as much natural talent."

Some believe the Woking based team will make the announcement in Brazil this week.

But a McLaren spokesperson said: "The team is not in a position to confirm anything at this time."

That could be because Daniil Kvyat, the newly axed Red Bull driver, is also in the running.

McLaren team boss Eric Boullier is quoted by Russian media as saying Kvyat "would not be a bad option for any team".

(GMM) Liberty Media and the FIA helped to keep Fernando Alonso at McLaren and Honda in formula one.

That is the admission of Zak Brown, the McLaren executive.

He is referring to the complex recent negotiations about 2018, with McLaren and Honda splitting, Renault signing Carlos Sainz and the formation of Toro Rosso-Honda.

"But all the names you mentioned, including the FIA, all worked together. Otherwise I don't think the deal would have been successful, Fernando Alonso probably wouldn't have stayed with us and Honda would have left F1," he added.

Convincing Alonso by switching to Renault power could mean McLaren is a force to be reckoned with in 2018, Brown reckons.

"We have GPS data from all the teams and we can see that we are close to Red Bull, Ferrari and Mercedes in some races with the car.

"We are confident that we will be fighting with them next year, which is the goal," he said.

As for Alonso deciding to stay, Brown added: "Fernando is a fighter on the track, I'm a fighter too, so we speak the same language.

"I hope that was one of the reasons why he stayed, along with the fact that McLaren is a great team," he said.

"Things did not go so well with him at Ferrari, but here we have created an environment that he likes," Brown added.

Currently, the stewards panel changes at every race, and Haas team boss Steiner thinks that is why so many recent decisions have been so controversial.

"Every time, decisions are being made differently and this sometimes hurts the small teams more," he told Speed Week.

"In my view, the way out of this is to appoint permanent stewards who really know their business," Steiner added.

He said he has already had some talks with F1 race director Charlie Whiting.

"We are discussing this all the time," Whiting said, "but we believe that the appointment of four permanent stewards for the whole year will only lead to many new questions.

"I do not want to go into details, but at the moment we consider our direction to be more reasonable," the top FIA official added.

F1 success largely down to genetics, says Rosberg
Retired Formula 1 world champion Nico Rosberg believes a dominating factor in being successful in racing is sparked by “a natural gift" from genetics, having followed in the footsteps of his father Keke Rosberg.

Rosberg’s 2016 title triumph emulated his father’s 1982 F1 world championship, becoming the second father and son partnership to win F1 world titles after Graham and Damon Hill, while a long list of past and present drivers follow a similar story.

Max Verstappen and Kevin Magnussen have both reached F1 having seen their fathers achieve similar feats before them, as well as Jolyon Palmer who recently left Renault, with his replacement Carlos Sainz Jr having two-time World Rally Champion Sainz Snr to learn from.