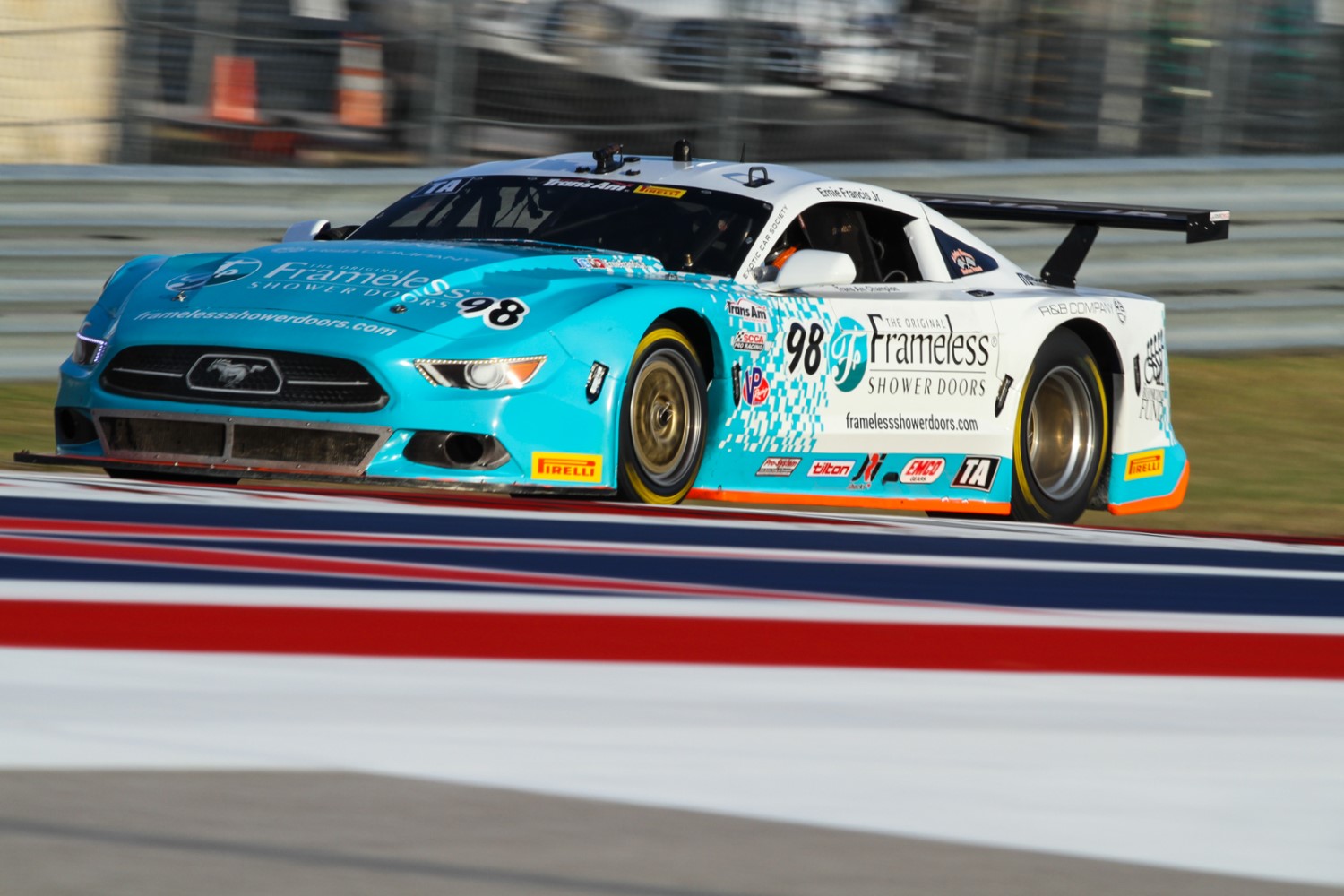 In rare come-from-behind fashion Ernie Francis, Jr., secured his seventh Trans Am Series presented by Pirelli win of the season at Circuit of The Americas with a last gasp pass over Lawrence Loshak on the final lap. Joining in the podium celebration with class victories were Jason Daskalos and Shane Lewis, in the TA3 and TA4.

Francis, who captured the season title a race prior at New Jersey Motorsports Park, began the race on pole in the No. 98 FramelessShowerDoors.com Ford Mustang but spent much of the race in pursuit of the lap. On the first of two restarts, Francis fell back to fourth position but diligently worked his way up through the field. For the final nine laps of the 29-lap race, Francis would settle in pursuit of TA debutant Loshak, in the No. 50 Pennzoil/GoShare Chevrolet Camaro, making his move on the inside of turn one on the 29th lap, taking the lead.

"It was a tough race," said Francis. "Different for us from what we’re used to. On the first restart, we lost several positions and it was my fault. I just couldn’t see the green flag, and I’d opted for the team not to call it for me. Paul Fix and Tomy Drissi were able to get around us, and it definitely cost us some time. We had to put our head down and try to focus."

"Chasing Loshak was tough," said Francis. "I tried to keep the pressure on, make him make a mistake, but he’s a good driver–he’s used to pressure from TA2. On the last lap he went just a little bit wide through one, and I had to sneak it in. We went side-by-side through two and the esses, and I wasn’t sure if either of us was going to make it out! I’ve got to thank the guys from FramelessShowerDoors.com for helping us put this weekend together and bringing home the win."

The win stands as Francis’ 32nd across all classes, overtaking Paul Gentilozzi, on the all-time Trans Am wins list across all classes. Of those wins, seven came in the TA class in 2017, the rest in Francis’ championship winning 2014, 2015 and 2016 seasons in TA4.

"A great win, our 32nd," said Francis. "That and the 2017 TA championship, it’s all been a pretty incredible year. I love COTA; my first win in pro racing was at this track at few years ago. This track has some history for me and even more now. It’s always great to race here."

Loshak would hold second position through the checkered flag, finishing on the podium in his TA debut after two years of full TA2 competition, bringing home Burtin Racing its third podium finish of the year. Tomy Drissi, in the No. 8 Murder on the Orient Express Chevrolet Corvette, would finish third to complete the TA class podium after working his way up through the field after starting in sixth position.

Marks and Paul Fix, in the No. 4 StopFlex/CarCoach Ford Mustang, both joined Loshak in leading the most laps of the race at nine apiece. Marks was issued a black flag for retaking positions during the initial pace laps following a stop on the front straight while Fix suffered engine failure while in the lead on lap 19.

In TA3, Jason Daskalos would capture his second class victory in as many races from behind the wheel of the No. 7 Daskalos Dodge Viper Comp Coupe. Daskalos moved up from third starting position to first immediately after the green flag and never relinquished the position, setting a fast lap and new TA3 track record 2:16.900 lap of his own.

Daskalos would battle throughout the multi-class field with a pair of Ginetta G55-GT4s driven by Parker Chase and Charlie Robinson, participating in the race in an exhibition capacity.

"It was a tough race even with the cautions," said Daskalos. "Some of the TA cars were slowing down the field for us, and battling with those Ginettas–they’re just on rails and hooked up in corners. We were having a good race; I’m sorry Parker (Chase) broke down– but it’s always nice to end up on the podium and bring home a win."

Daskalos was followed across the finish line by the Fall-Line duo of Mark Boden, in the No. 46 Fall-Line Porsche 911 GT3, and Tim Kezman, in the No. 14 Fall-Line Motorsport Porsche 911 GT3, capturing second and third on the TA3 podium. Boden and Kleeman’s inter-team battle for the TA3 championship will continue on to Daytona, with only 19 points separating the two.

Dirk Leuenberger, in the No. 35 Lux Performance Group Dodge Viper ACRX, and Milton Grant, in the No. 5 Sentry Self Storage Porsche 997, completed the TA3 top five.

In TA4, Shane Lewis, a full-time TA2 class competitor, brought home the No. 22 Rennsport KC Ford Mustang, in first place–leading every lap and setting a track record 2:23.742 lap. Lewis stood as a guest driver for owner-driver JR Pesek, who offered up his seat to Lewis in a weekend long tribute to late Trans Am competitor Mel Shaw, including a special livery and flying Shaw’s No. 22.

"There was so much going on out there," said Lewis. "Between the yellows, the traffic, the multiple classes, and a lot of pressure from behind–but what a great way to start the Saturday races, to start on pole and lead every lap for these guys at Rennsport KC in memorial of Mel Shaw, it’s just an honor, a true honor."

Joining Lewis on the TA4 podium was Todd Napieralski, in the No. 39 Chevrolet Performance/ TREMEC Chevrolet Camaro, in second place and Brian Kleeman, in the No. 07 DWW Motorsports Ford Mustang, who finished third despite a cut tire on lap five forcing him to pit. The podium finish also saw Kleeman clinch the 2017 TA4 Championship.

"Some days you’re the bug, some days you’re the windshield," said Kleeman. "Today we were a bit of both; the flat tire took us out of contention for the win or podium. Still we were able to battle back enough. We didn’t need a lot of points here to clinch, but we got enough to clinch the championship–so I’m happy with it. I don’t really think the significance of the championship has really set in yet; it’ll probably land sometime tonight when I get home."

Also in action this weekend was the Trans Am West Coast Championship, with both Tomy Drissi and Greg Pickett, in the No. 68 Pickett Racing Ford Mustang, participating–concluding their four-race championship that included Willow Springs International Raceway, Auto Club Speedway and Portland International Raceway. While Drissi would take home the TA class West Coast win, it was Pickett who clinched the championship with his second place finish (12th overall).

The championship is Pickett’s second in Trans Am, his first coming in 1978 as the Category II Champion, and with Trans Am wins in five decades over under his belt, Pickett has little inclination of bringing his Trans Am career to a close anytime soon.

"I’ve been blessed with good health, I’ve been fortunate in business, I’ve had the unbelievable support of a dear wife of mine for fifty years, Penny, who has been behind me every bit of the way," said Pickett. "I’ve just been blessed in so many ways to have the Trans Am in my life–it’s been so important. It’s added so much texture and flavor, and so much color to my life that I will always been indebted to Trans Am and the great competitors and champions that I’m so privileged to be just one of."

The Trans American at COTA race constituted Round 12 of the 2017 Trans Am Championship presented by Pirelli and ran for a total of 75-minutes, falling one lap short of its originally planned 30 due to time constraints. The race went under two full-course cautions, the first lasting from lap six to the start of lap 11 to retrieve the No. 13 of Guy Dreier stopped in an unsafe position, and from lap 14 to the start of 19 for the No. 52 of Kurt Fazekas and No. 11 of Marko Radisic both stopped on course after contact and for debris clean up.

For his pass for the lead Ernie Francis, Jr., was awarded the COOLSHIRT Systems Cool Move of the Race, while the Rennsport KC team was awarded the Pitboxes.com Crew of The Race for their tribute livery to Mel Shaw, team owner JR Pesek was named the honorary Traq Gear Crew Chief for his role in the effort.

The No. 2 of Steven Davison, which had finished second provisionally, was given a penalty following the race for avoidable contact while on probation. Davison was excluded from the results and suspended for the remainder of the 2017 season.

While the TA2 class will return to the track at COTA later today at 4:25 PM CT for their own Trans American Muscle Car Challenge, the rest of the Trans Am field will head to Daytona International Speedway for the 2017 Trans Am finale Saturday November 11th.