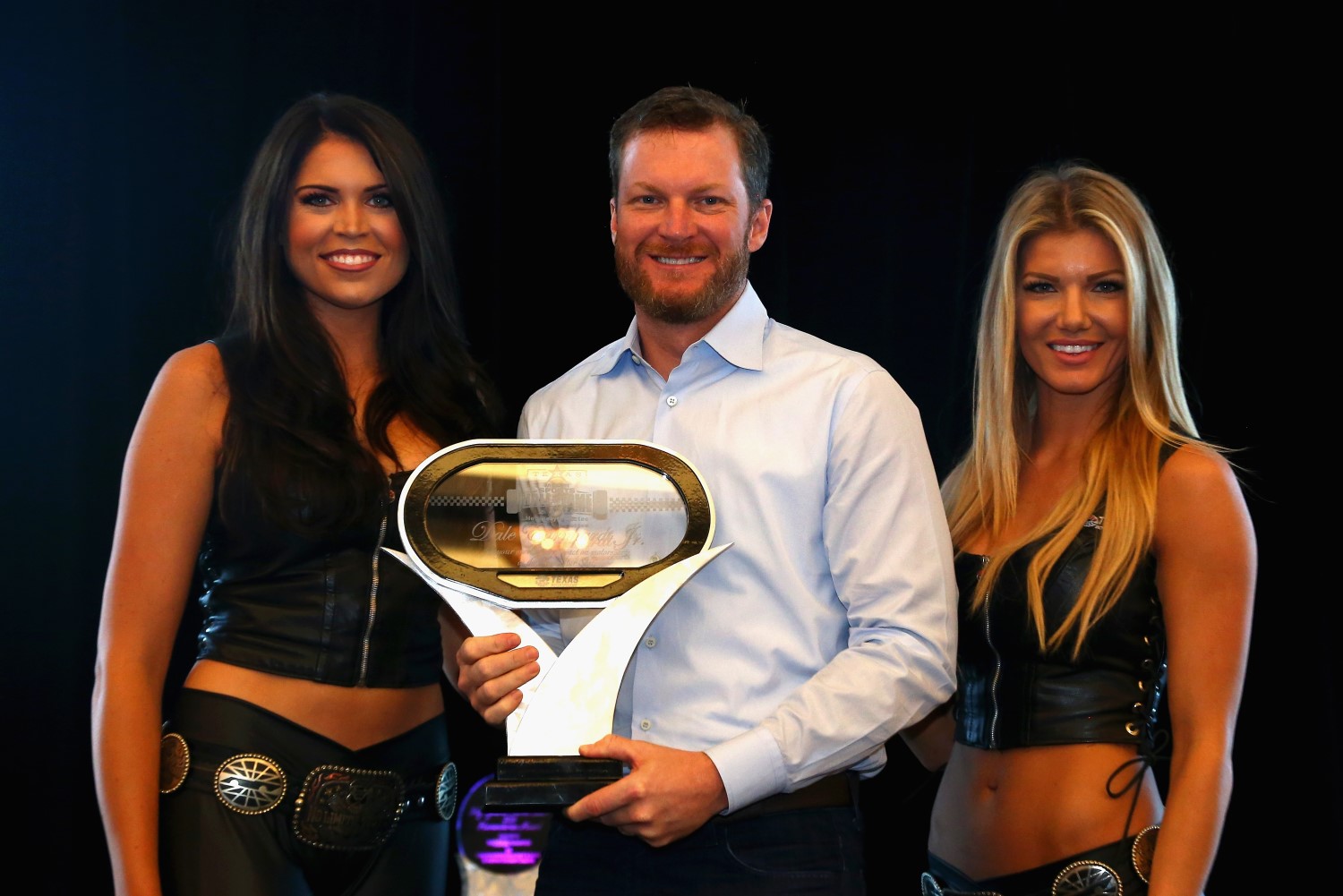 “This place is special mainly because of the fact that we did get our first XFINITY win here and came back and got our first Cup win here in such a short period of time," said Junior, greeted by a standing ovation during ceremonies in The Grand Ballroom of The Speedway Club. “This is such a great racetrack, it’s been so fun to race on."

Earnhardt Jr. earned his first career XFINITY Series win on April 4, 1998 in the Coca-Cola 300 in his 16th career start. Driving the No. 3 ACDelco Chevrolet, Junior took the lead from veteran Joe Nemechek on the final lap and held off pole-sitter Elliott Sadler to win by 0.178-seconds.

Nearly two years to the day later, Junior won his first Cup Series race on April 2, 2000 in the DIRECTV 500. Starting fourth, Junior was the class of the field on a day in which he led 106 of 334 laps in his No. 8 Budweiser Chevrolet to become the first Cup rookie driver to win at TMS. Junior finished a decisive 5.920-seconds ahead of runnerup Jeff Burton, who scored his first Cup win in the inaugural Cup race here in April 1997.

Earnhardt Jr., 43, shocked Junior Nation on April 25 when he announced his intention to retire after 18 seasons and more than 600 races behind the wheel. The decision aligned with the end of Earnhardt’s current contract with Hendrick Motorsports, set to expire at the end of 2017. A two-time Daytona 500 champion, Earnhardt has driven for team-owner Rick Hendrick since 2008 following an exit from Dale Earnhardt Inc.

Junior’s connection to the Lone Star State extends beyond the racetrack as his wife, Amy, is a native of Victoria. The Earnhardts are expecting their first child, a girl, next spring. “The baby is due May 2," Junior said. “I’m pulling for April 29th, my dad’s birthday. I’ve fallen in love not only with Amy but with her family."

Helton received the Bruton Smith Legend Award for his leadership as NASCAR president and shaping the sport during an unprecedented expansion period that began during the mid-1990s. Helton was instrumental in introducing NASCAR to new markets both nationally and internationally. New state-of-the-sport facilities in North Texas, Southern California, the Chicago market and Kansas City were added to NASCAR’s schedule by 2001, moving the sport beyond its traditional Southern-based roots.

Helton also was a key figure in the formation of the NASCAR Research & Development Center in Concord, N.C. Dedicated to strengthening NASCAR’s competition and safety initiatives, it is the first R&D center owned and operated by a sanctioning body of a major motorsports series.

Helton took a moment to thank Junior – perennially voted NASCAR’s Most Popular Driver – for his impact on the sport. “Dale Earnhardt Jr. is what our sport is all about," Helton said. “Everybody in the industry is very proud of you."

“Rowdy" Busch, of Joe Gibbs Racing, was honored as 2016 Racer of the Year following another impressive overall performance at TMS. For the second time in his career, Busch swept both the Cup and XFINITY series races in Fort Worth during the same weekend, winning April’s Duck Commander 500 and the O’Reilly Auto Parts 300 in a pair of Toyota Camrys.

Native Canadian Hinchcliffe’s handling of a heartbreaking defeat in the rain-delayed 2016 Firestone 600 earned him the TMS Sportsmanship Award. Graham Rahal of Rahal Letterman Lanigan Racing made a dramatic last-lap pass of Hinchcliffe’s Arrow Schmidt Peterson Motorsports Honda to win by 0.0080-seconds, capping an event dubbed “The Resumption." Rahal hoisted the Foyt-Rutherford Trophy after the closest finish in TMS history and fifth-closest in Indy car history.

In addition, the NRA Foundation was presented the Major General Thomas Sadler Humanitarian Award for its ongoing support of SSC programs. Over the past 21 years, Texas Chapter has raised $10.2-million in grants while helping 3-million children in a four-county area.

Established in 2003 by TMS President Eddie Gossage, the TMHOF honors individuals with ties to the Lone Star State and “The Great American Speedway" founded by O. Bruton Smith, executive chairman of Speedway Motorsports, Inc. Honorees receive a pedestal highlighting their accomplishments housed in the Hall of Fame Atrium adjacent to The Speedway Club. A panel of local and regional journalists select the nominees and vote on the inductees.