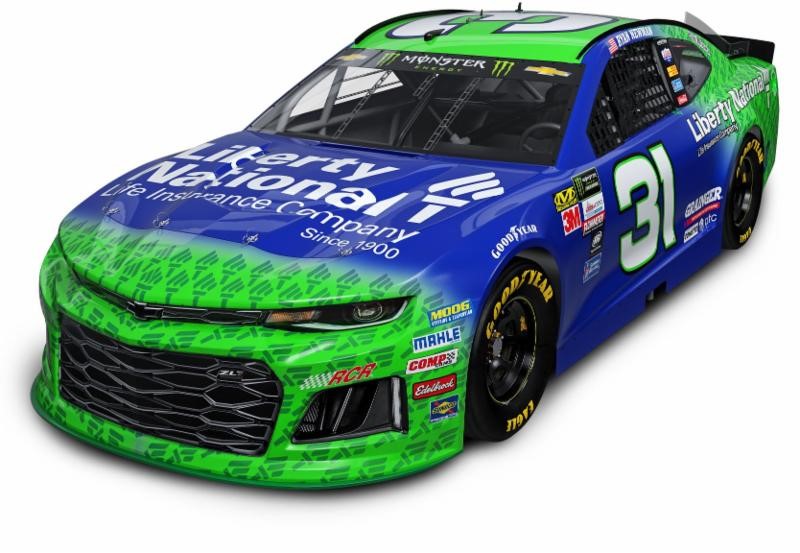 Liberty National is a leading provider of life and supplemental health insurance for middle-income Americans through in-home and workplace sales. Liberty National was founded in 1900 and is based in McKinney, Texas. LNL Racing will use marketing assets provided by RCR to engage its independent sales agents, independent agency owners, and policyholders throughout the United States.

"Liberty National Racing (#LNLRacing) is excited to continue in NASCAR in 2018 with Richard Childress Racing, Ryan Newman, and the No. 31 crew," said Steve DiChiaro, president of Liberty National's Agency Division. "Liberty National has sustained its place in the industry since 1900 because of the relentless pursuit of excellence by our independent agents and agency owners who help build our organization, give back to local communities where we have offices, and service our customers. We feel Richard Childress Racing is a great fit for our vision and values. This opportunity with RCR is a vehicle to expose and expand our brand to new audiences in 2018 and to reward our people and customers with once-in-a-lifetime experiences at the tracks. On behalf of our independent agents, agency owners, and policyholders, we look forward to seeing our logo on Ryan Newman's car next year."

Liberty National Life Insurance Company will join RCR's family of more than 40 corporate partners and becomes an official benefits provider to RCR. Liberty National's 2018 race program will include at-track activation to engage its independent agents and business-to-business customers. Away from the race track, Liberty National will leverage digital and social media assets to grow its brand as a leading provider of life and supplemental health insurance, identify business-to-business opportunities, and recruit new agents and customers.

"We feel that this partnership is a terrific opportunity for Liberty National to expose its brand and products to millions of NASCAR fans while expanding its footprint," said Torrey Galida, president of RCR. "We look forward to hosting and engaging their agents and customers at the races next season."

Ryan Newman and the No. 31 team qualified for the 2017 NASCAR Playoffs with a win at Phoenix International Raceway earlier this season. Newman is currently in his fourth season with RCR and is an 18-time winner in the Monster Energy NASCAR Cup Series.