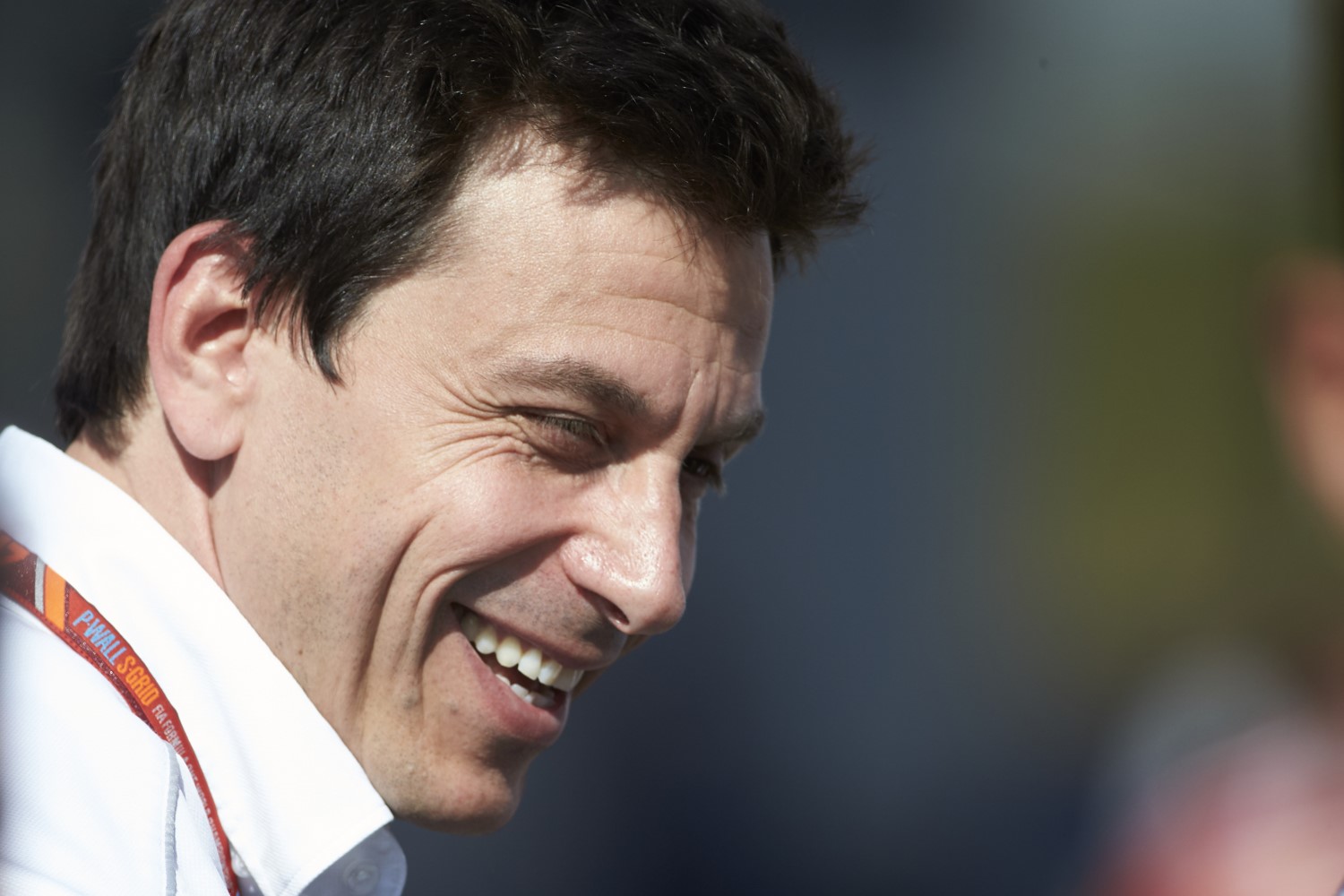 (GMM) Lewis Hamilton thinks talks about his next Mercedes contract will be "easy".

Earlier, although the Briton had hinted he wanted to stay a further three years after 2018, team chiefs said Hamilton should instead concentrate on the 2017 title battle.

So with his fourth championship now in his pocket, the 32-year-old again appears keen to talk.

"Already a few weeks ago we were sitting in the factory and talking about it for the first time," Hamilton said. "It should be an easy conversation."

Indeed, even the Ferrari-partisan Italian press admits that Hamilton is now one of F1's true greats.

"He is comparable to Mansell in speed, to Senna in overtaking, and to Prost and Lauda in his ability to master a race."

The British press is speculating that Hamilton could be knighted in the next round of New Year Honors.

Hamilton told The Sun: "I am trying to represent the country in the best way I can and if that is recognized by the Queen then I'd be incredibly honored."

But even if he does race into 2018 as a 'Sir', Hamilton is expecting an even tougher battle to keep his F1 crown.

"Formula one doesn't sleep, it doesn't stand still," he said.

"Red Bull have a potential world champion in Max Verstappen and he is only going to get stronger with age."

(GMM) He may have two Honda-powered grands prix still ahead of him, but Fernando Alonso is already looking ahead to next year's pre-season tests.

He hinted to Spain's Cadena Ser radio that he is relieved McLaren's Honda era is finally ending, and got a taste of what could be next after dueling with new champion Lewis Hamilton in Mexico.

"I would have liked to keep fighting him and beaten him," said Alonso, who won his last title in 2006.

"Can I match the four championships of Hamilton and Vettel? I'll try," added the 36-year-old.

"I hope to be able to fight on equal terms.

"It's true that I have not won since 2006, but I think I could have had four or five titles including a very recent one," Alonso said.

Alonso is suddenly more optimistic about 2018 after McLaren decided to drop its works Honda collaboration and switch to customer Renault power.

"It's been very frustrating and it has required a lot of patience. But I think we're going to be very competitive next year.

"We saw in Mexico that Verstappen was able to do a great race with the Renault engine," he added.

Asked if he has hopes McLaren can match what Red Bull has been able to do with Renault power, Alonso answered: "It's hard to know because we have no comparison, but the feeling is good.

"From the outside the engine looks very good. In the last few races we have introduced aerodynamic parts and they have worked well, so we have every ingredient to be competitive next year."

Asked if it will be enough, Alonso added: "I hope we can compete with Hamilton for the title next year."

Indeed, it was nothing short of a horror weekend for the French marque in Mexico, with Viry-made power units failing not only at the works team but also customers Red Bull and Toro Rosso.

Even the winner, Max Verstappen, was nervous as he cruised to victory.

"I could see problems with many drivers and it made us nervous," said the Dutchman.

"I saw that Daniel was also out and Toro Rosso and I thought 'Oh my god, do not let that happen to me'."

Daniel Ricciardo agreed: "For some of us, it was a gruesome weekend."

For his part, works Renault driver Hulkenberg had to leap out of his failed yellow car with both feet so as to prevent an electric shock.

"Something like this (Mexico) must not happen to a manufacturer," he told Bild newspaper, referring to Renault's Mexico outing.

"It is not acceptable. We are not good enough."

For the German, it's his sixth DNF this year.

"Everyone is angry, frustrated, disappointed," Hulkenberg told Auto Motor und Sport. "We somehow have to get it under control for next year.

"The damage has been done this year but reliability is our first homework task for 2018," he insisted. "Otherwise, even having the fastest car would not help us."

Max Verstappen has admitted that the array of problems which affected other Renault-powered cars left him worried during his drive to victory at the Mexican Grand Prix.

Verstappen wrestled the lead away from Ferrari's Sebastian Vettel through Turns 1 and 2, and from there cruised clear of his rivals, building a gap over Mercedes' Valtteri Bottas.

However, Red Bull teammate Daniel Ricciardo suffered a turbo failure while Toro Rosso's Brendon Hartley exited when his engine expired, having also been forced out in Q2 with an issue.

Elsewhere, Pierre Gasly's running on Friday and Saturday was limited by power unit issues, while Renault's Nico HÃ¼lkenberg failed to reach the checkered flag due to an ERS problem.

Verstappen conceded that the issues for other Renault-supplied racers had caught his attention.

"I think Pierre was also still going, but I could see a lot of cars blowing up and retiring, so I was definitely a bit worried," he said.

"I saw on the TV screen that [Ricciardo] retired and then I saw another Toro Rosso in front of me on fire and I was like, 'Oh my god, don't let this happen to me'.

"So we turned down the engine quite a lot and everything seemed to be fine.

"Luckily, I have quite a new engine, so maybe that helped out quite well, but then again Daniel was with a very new engine as well.

"I had my bad luck in the beginning of the year, so I'm very happy that this time nothing happened to me."

Verstappen also praised the feel of his RB13, commenting: "I was pulling away every single lap.

"The car had a great balance, I could look after the tires and I managed to bring it home like that.

"I knew that the car was good but I didn't know that it was going to be this good in the race."

Ferrari-backed Formula 2 Charles Leclerc champion will carry out running for Sauber at this week's Pirelli tire test at the Autodromo Hermanos Rodriguez.

As part of Pirelli's initiative to refine its tires for future seasons, the sport's sole supplier is permitted 25 days of running per year, conducted in association with teams.

Sauber has stayed on following the Mexican Grand Prix and Leclerc will be behind the wheel of the C36-Ferrari on both days of the tire test.

As per usual, Pirelli will define the run plan, with drivers unaware of the specification they are using, and all data gathered during the test will be shared between each Formula 1 team.

Leclerc has emerged as a contender for a Formula 1 seat with Sauber, having secured successive titles in GP3 and Formula 2 since joining Ferrari's young driver scheme in 2016.

The Monegasque youngster has participated in three practice sessions with Sauber, and is set to run again at next weekend's Brazilian Grand Prix.

Force India will also be in action at the test, though only on Tuesday, with reserve driver Alfonso Celis Jr. to pilot the VJM10.

Force India has pulled clear of the midfield pack in 2017 and put in another strong performance in Mexico, with Esteban Ocon fifth and local favorite Sergio Pérez in seventh position.

As a result, Force India now holds an insurmountable 99-point advantage over Williams in the standings, and has surpassed its record points tally, from 2016, having amassed 175 points.

"It's fantastic to confirm fourth place in the championship with a competitive race in front of so much support from the Mexican fans," said Fernley.

"For a while the podium looked to be within reach for Esteban until the Virtual Safety Car handed the advantage to [Kimi] Raikkonen and also brought [Lance] Stroll into play.

"Esteban had to work hard for the final 20 laps fending off the Williams and did a fantastic job despite being on older tires.

"Sergio made a late pit stop for some new Ultra Soft tires and was catching Stroll quickly, but we just ran out of laps.

"This result is another demonstration of the progress we have made this season and fourth place in the championship for the second year in a row is a wonderful reward for the entire team."

Pérez was upbeat over his recovery from 10th to seventh, but felt the timing of the Virtual Safety Car meant he lost out to Williams rival Stroll.

"It's a shame that the Virtual Safety Car happened at the wrong moment because it allowed Stroll to jump ahead of me," Pérez lamented.

"Otherwise I think we could have finished in sixth.

"The main objective of the weekend was to confirm fourth place in the championship so I'm extremely happy that we have done this with two races to spare."

Vandoorne felt points were up for grabs

Vandoorne started from a penalized 19th but vaulted up to 13th on the opening lap, and moved into the top 10 prior to the pit stop phase.

However, Vandoorne lost time in the pits and dropped behind Williams' Felipe Massa, while he later ceded another position to the recovering Mercedes of Lewis Hamilton.

"We had an amazing start– we were 13th after the first lap – but we've seen how much we are missing in a straight line," he said.

"We couldn't even keep a Sauber behind and we couldn't really overtake after that, so we lost ground.

"But our pace in clean air was very positive, the car felt very good, and starting from the back we knew it was always going to be tough for us.

"The end of the race got very exciting with a few cars coming close together, but it still shows that our straight-line speed is not good enough.

"It was a difficult race for us – there were definitely points on the cards, but we were just too compromised because of our speed and losing time in the pitstop with the late VSC call.

"The positives we can take away are that our pace was really strong and we made it to the end, but our deficit on the straights is still too big."

Teammate Fernando Alonso rounded out the top 10, to add another point to McLaren's tally.