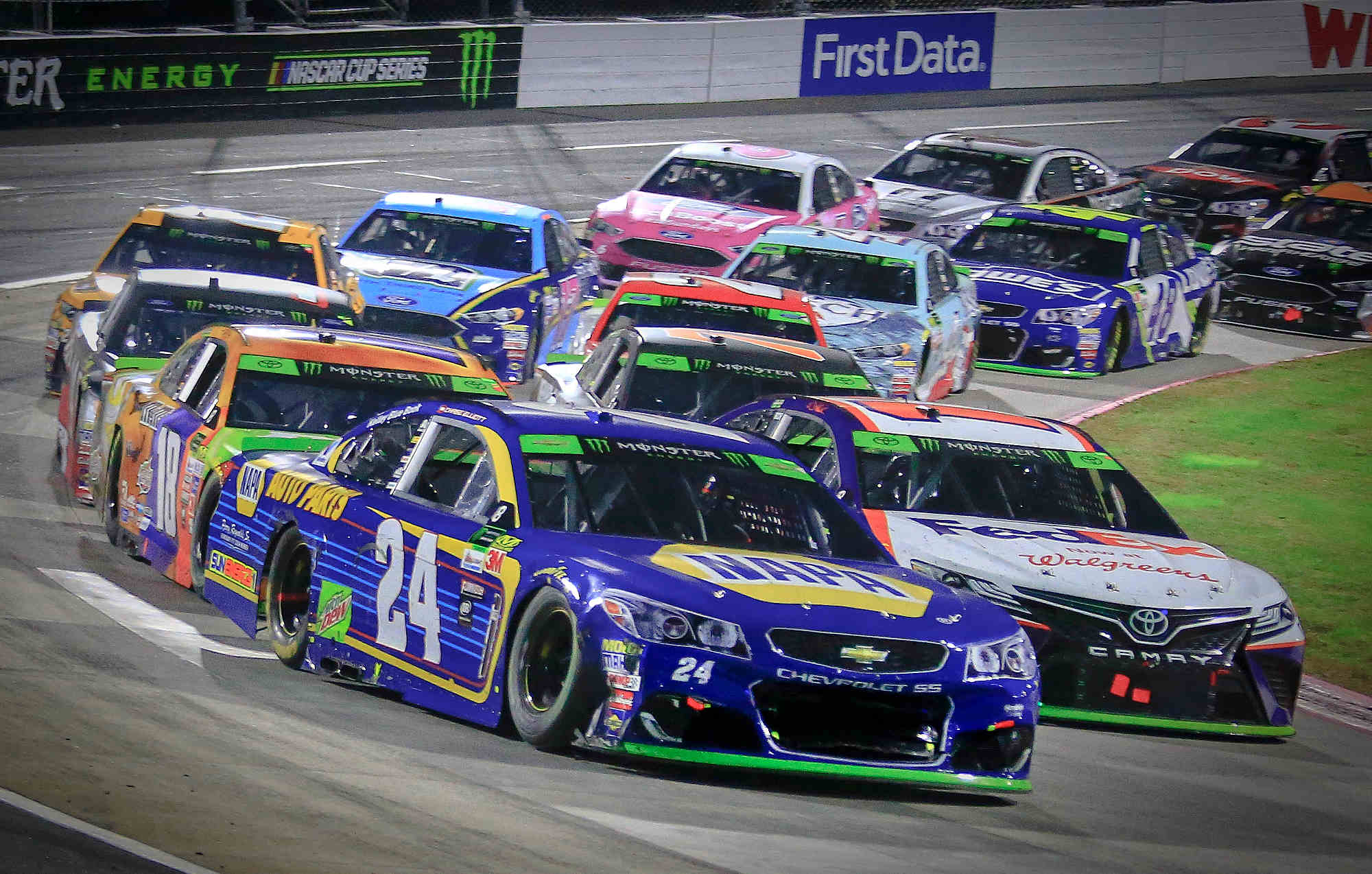 A son of Virginia and five-time winner at the Paperclip was booed as the 23rd-place finisher was adored and all while new LED lights came into play during the final laps of the First Data 500. And labeling either as a bully or a victim or both was a matter of perspective.

Call it "Martinsville: After Dark." (see Video below)

It was inside a cloak of laser brightness at Martinsville that Denny Hamlin hustled his way to a seventh-place finish in the First Data 500. That wasn't the championship-spot-clinching victory that seemed to be his at the start of overtime — no, that went to Kyle Busch. Yet, Hamlin didn't freefall to the back of the playoff pack. He'll go to Texas, the second race in the last three-race block before the championship, in seventh place and trailing #4 Kevin Harvick by eight points.

Meanwhile, Chase Elliott is looking up from the final spot in the Round of 8, back an intimidating 26 points after yet another time career victory #1 slipped from his grasp in the closing moments.

Or was it yanked away? Again, it's all about perspective.

"It's just Martinsville — that's what it's all about," Harvick said. "It's championship time."

Harvick, who escaped unscathed and with his playoff destiny at least momentarily secure after finishing fifth, was painting with a broad brush.

Otherwise here are the only indisputable facts: Elliott took the lead from Brad Keselowski with three laps remaining in regulation when Hamlin spun him into Turn 3 to prompt the race's 11th caution and overtime. A multicar accident developed as the checkered flag dropped and, with the race over, Elliott engaged Hamlin as teams began to separate cars on the track.

"He has been doing this long enough where it shouldn't happen," Elliott, who led a total of 123 laps, said afterward. "What he did was unnecessary (and) there's no reason for that. He knows the deal. He knows how the race works. He knows how Martinsville is. He didn't even try to move me out of the way. He just shoved me and wrecked me."

Boos muffled celebratory cheers for Busch as the infield video board showed television coverage of Elliott and Hamlin's post-race interaction.

The two were separated before it escalated, though not until it had drawn the ire of a pro-Elliott crowd that lingered as cold temperatures set in even as tensions grew heated.

Many were guided by the opinion of someone looking through lenses with "#24" stamped on them.

"I'm not an expert, and I wasn't driving either car, but I definitely saw (Elliott) not leave (Hamlin) a lane and kind of chop him on the exit," said Adam Stevens, crew chief for Busch, "and then it looked like he really slowed down an amount that Denny wasn't expecting getting into the corner. That's what I saw."

That would seem cut-and-dried, the assessment of an independent third party who sees things differently than many of those who booed. And it jibes with Hamlin's initial statement that it "was a ticket to Homestead. I'm not saying I tried to wreck him on purpose. I moved him out of the way and (he) spun out."

That, it would seem, should clear things up on both sides.

"If you don't have anything nice to say, don't say anything at all," Elliott said. "He's not even worth my time. We're going to go on to Texas."

That track, like every other in his brief Monster Energy Series career, has been kind, though not loving to Elliott. He has two top-five finishes there and was ninth when the circuit raced there earlier this year. He's finished ninth, eighth and 12th at Phoenix. Like everywhere else, though, he is winless.

Hamlin has had mixed success at each of the next two stops, with two wins at Texas in 2010 and a 2012 victory at Phoenix. A mix of top-five and top-10s have been sprinkled in since those victories, leaving him anything but a sure thing at either track.

Cooler heads will likely have prevailed by the time the playoffs resume in Texas, just as it seems to have happened Sunday night when Hamlin issued an apology on Twitter.

"I've raced nearly 10,000 races since I was (seven)," Hamlin wrote. "(Sunday) was the first time I've ever spun out the leader. I regret the outcome because it was not intentional the way it turned out but I'm responsible for my own car and take blame. Nothing I say can turn back the clock but it's a life lesson and hope no kids out there aspire to race thinks that the way you should do it. It's becoming normal in our sport now and I hate that I'm now in the discussion as a guilty party but I'll move on and hope Chase, his team and fans accept my apology."

The thing to keep in mind is that accepting or declining an apology, like determining the maliciousness of Hamlin's contact with Elliott, is a matter of perspective. by Scott Hamilton NASCAR Wire Service