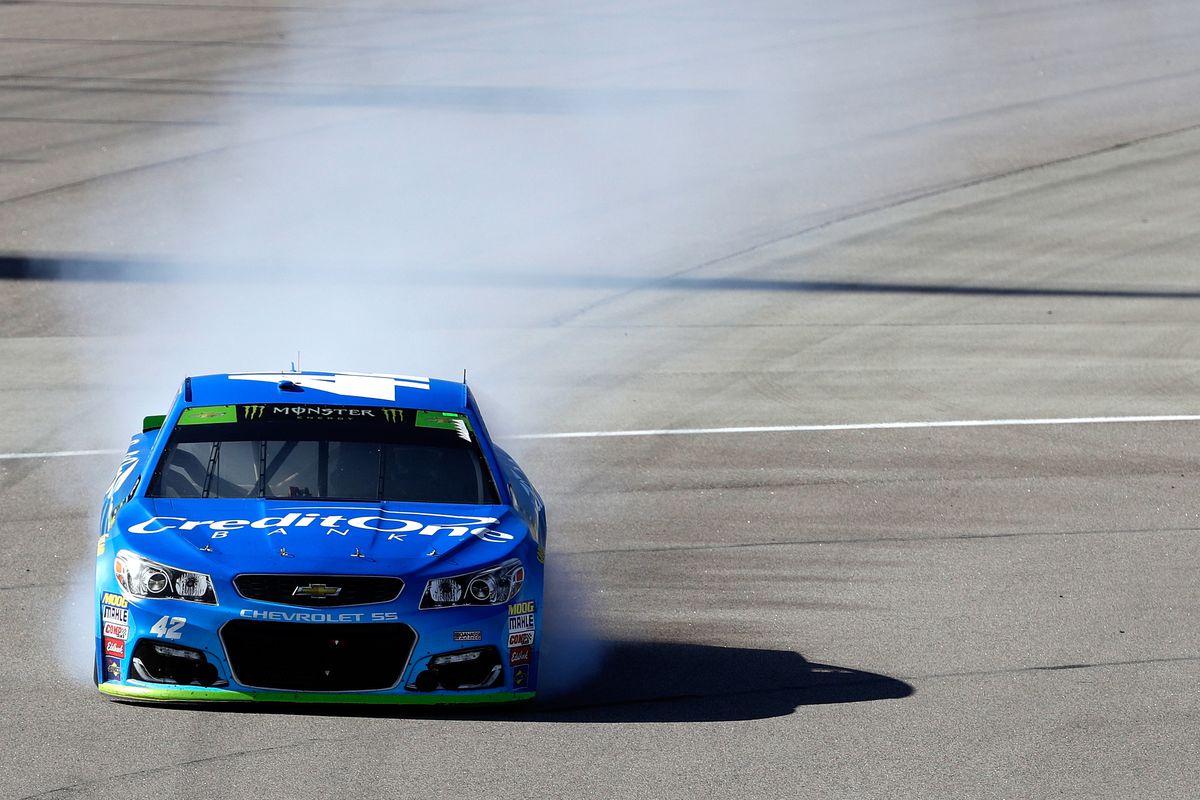 Kyle Larson was considered to be one of the top contenders to win the Monster Energy NASCAR Cup Series championship next month at Homestead-Miami Speedway.

Unfortunately he won’t get the chance to race for a championship after an engine failure Sunday afternoon at Kansas Speedway ended his championship chances.

Larson, who entered Sunday’s Hollywood Casino 400 at Kansas Speedway with a 29 point cushion over the cutoff line in the playoffs, retired from the race on lap 76 when the engine in his Chevrolet went up in smoke.

The engine failure, the first of Larson’s NASCAR Cup Series career, resulted in Larson finishing 39th. The poor finish dropped him out of the playoffs along with Matt Kenseth, Ricky Stenhouse Jr. and his Chip Ganassi Racing teammate Jamie McMurray, who were all eliminated on Sunday.

“I think we dropped a cylinder or something. It’s a disappointing way to finish a race and probably our season," Larson said moments after climbing from his car in the garage area. “Disappointing, but we’ve had a good year."

Kenseth, meanwhile, looked to be in the catbird seat as he attempted to advance to the next round of the playoffs. His primary competition, defending and seven-time series champion Jimmie Johnson, had spun twice and was struggling as Kenseth ran near the front of the field.

All that changed on lap 197 as the field was battling for position during a restart. Erik Jones spun coming out of turn two as he was racing for fifth and he slid back up in front of the field. Kenseth was involved in the ensuing crash and was forced to head to pit road for repairs under the five minute clock as part of NASCAR’s damaged vehicle policy.

While on pit road for repairs Kenseth’s Joe Gibbs Racing team made a massive mistake when seven crew members went over the wall to work on the car. Under NASCAR’s damaged vehicle policy, only six crew members are allowed to work on a damaged car. Per the rules, NASCAR immediately parked Kenseth’s car for the rest of the race and thus ended any chance he had of advancing through to the next round of the playoffs.

“I don’t know what any of the rules are. It seems like we’ve got a lot of stuff that kind of gets changed so often I honestly can’t keep up with it," Kenseth said. “I just don’t get it to be honest with you. I honestly don’t have a lot good to say right now. I’m more than disappointed.

“We showed some flashes of brilliance this season. Been fast off and on at times. Had great pit stops at times. Just haven’t been able to put it all together like a championship team needs. Unfortunately this is an example of that."

McMurray and Stenhouse both entered Sunday’s race needing a miracle if they hoped to advance to the next round of the playoffs. Neither driver got the miracle they needed as McMurray was collected in the same crash as Kenseth on lap 197, while Stenhouse slammed the wall on lap 176 to effectively end his shot at the championship. Speed Sport