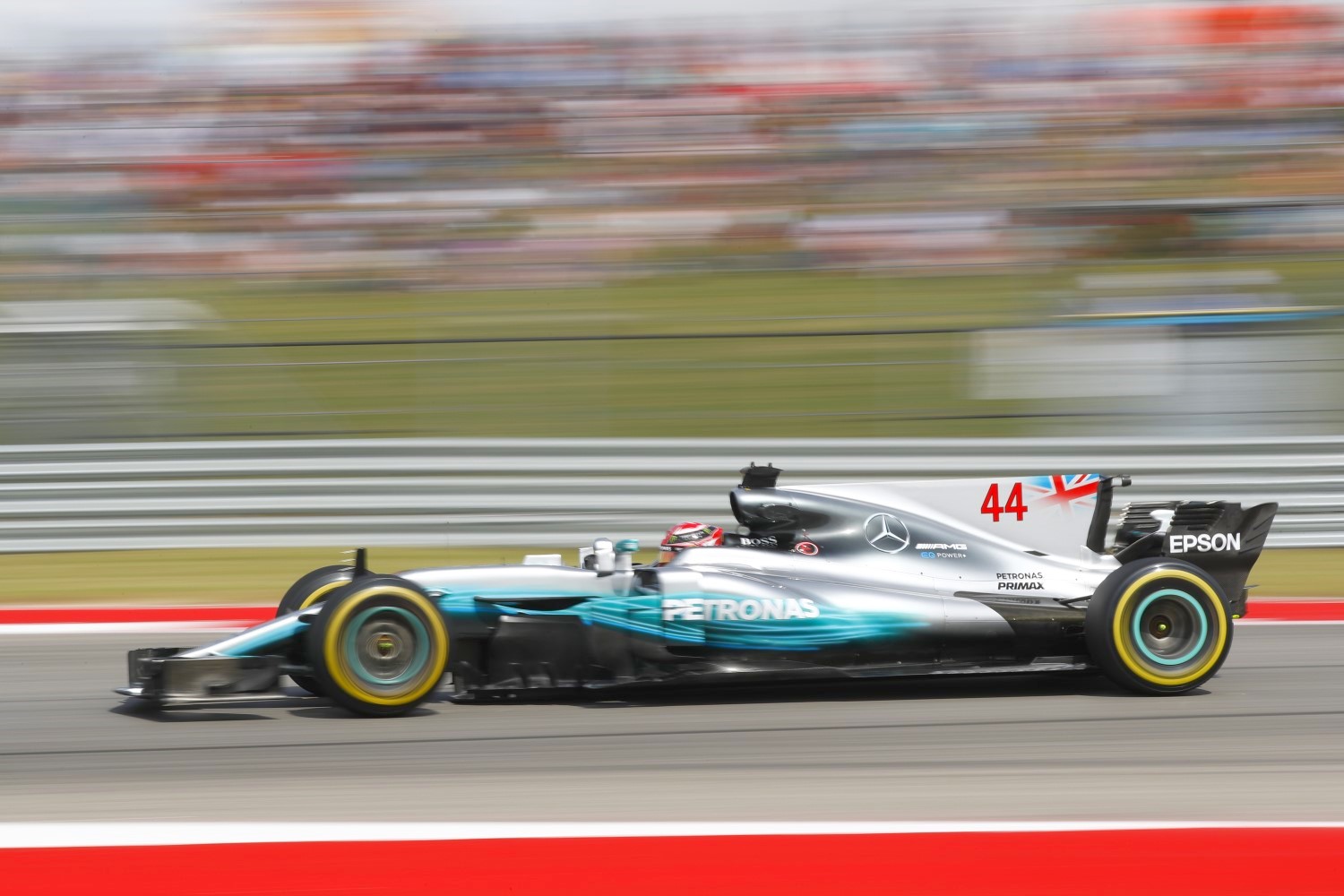 Lewis Hamilton again topped the 2nd practice for the USGP with a lap of 1m34.668s in his Aldo Costa Mercedes. Max Verstappen was 2nd for Red Bull 0.4 sec. behind.

Meanwhile Ferrari continues to choke as Vettel had limited running as his car sat in the garage most of the session. Despite his limited time on track Vettel still ended up 3rd quick 0.524 sec behind Hamilton.

Valtteri Bottas and Daniel Ricciardo rounded out the top-5 with Kimi Raikkonen in 6th.

With the track having dried after this morning’s damp session, it was Bottas who initially set the pace, taking over from fast-starters Alonso and Ocon, but eventually Hamilton was comfortably faster on 1m 34.668s, as the Finn could not better 1m 35.279s, which left him fourth.

Verstappen popped in his 1m 35.065s lap shortly before Vettel posted 1m 35.192s. Of the leading four, the German had the toughest session. He was late getting out, and then had a huge slide off the road in Turn 15 when running on soft rubber. It was some time before the Ferrari emerged again, but as expected they clearly are not far off the pace here.

Just outside the top 10, Carlos Sainz narrowly headed Renault team mate Nico Hulkenberg, with 1m 36.529s to 1m 36.534s; the German spent some time in the garage with technical problems.

Further back, debutant Brendon Hartley still had some problems with aerodynamic lift on his helmet, and lapped in a 17th fastest 1m 37.987s compared to Toro Rosso team mate Daniil Kvyat’s 1m 36.761s, which left the Russian 13th.

Besides Vettel, both Haas drivers had early spins.

“It was a complicated afternoon" Vettel commented “and not an easy session, but the car is quick, so we don’t need to worry too much about it. The only lap I had was the one with the Ultrasofts. Before that, I made a mistake taking too much risk and pushing too early. The track was quite slippery and I lost the rear under braking. So, we lost a set of tires, and then again, towards the end of the session, I felt that something was not right with the car. So, we checked a couple of times and now we are looking at the car to see if we can find something. I need to find the rhythm tomorrow and make sure everything’s in order".

“In the morning the weather was a bit tricky to start with, but all in all it was an ok day," said Raikkonen. “Just a normal Friday, in which we tried different things and learned as much as possible. Every circuit can be tricky when you’re trying to go fast, and for sure there can always be an improvement; but it was only the first day of practice. We don’t know what the other teams were doing and obviously it’s too early to make any predictions. All we know is that tonight we have some work to do for tomorrow".

Lewis Hamilton
It's been an interesting day with lots of ups and downs in terms of how the track has moved around and how the car feels. But overall the car was feeling good. There are lots of areas we can improve on, but generally it feels like a solid platform and a solid start to the weekend. It was amazing to have so much support at the fan signing today and also arriving at the track yesterday. I seem to have a lot of support out here, which I am super grateful for. I'm excited to see everyone tomorrow.

Valtteri Bottas
The first practice was compromised by the weather. We struggled to get many laps, and I also flat spotted at the tires in FP1 quite badly, so we had limited running. But in second practice we got a lot of running done, both short runs and long runs. So in the end, we got everything from today that we needed. Setup-wise I think we have the usual work to do. Overall, it has been a pretty normal day. I enjoyed today, but I'm hoping there is more to come tomorrow. Hopefully it stays dry over the weekend, it would be nicer for the teams and the fans.

James Allison
That's a promising start to the weekend. We have plenty of areas to improve, but we are generally quite happy with the car on all the rubber and both fuel loads. However, we are also conscious that Ferrari had a bit of a troubled day today, so maybe we haven't yet really seen where the opposition are at. I'm sure Valtteri will settle into the car a bit more overnight and we'll get it more to his liking. The early promise is of a decent weekend.

Max Verstappen
After a challenging year it’s a good feeling to sign a new contract and continue this strong relationship. I really believe in the team and they believe in me, we have a great working relationship and they gave me the chance to start a career in Formula One. We have had our ups and downs this year but I still feel really good in the team, you can see they have been working really hard to improve and today shows that we are again competitive. I enjoy being in this team which is very important for me so that’s why I decided to extend my contract. If we can learn from what happened this year I have no doubt that this team can build the best car on the grid and start 2018 competing at the front. I have learnt a lot this year after what has happened, which is definitely positive. Today we showed good pace both in long run simulation and short stints so I think we have the ability to achieve a good result here.

Daniel Ricciardo
It was not that easy today actually. The grip on the circuit was really low for what we were expecting with lap times. It’s humid so the tyres were getting really hot and then you struggle to generate the desirable grip on the car. We have a few things we can obviously try for tomorrow, now that we understand a bit more from these sessions. We didn’t really have the ideal set up but I think with all those things considered we’re not a million miles off the pace and if we can get it right tomorrow we can still be up there. That’s our target and that’s realistic so we’ll work on that and hopefully you’ll see us amongst the top three tomorrow.