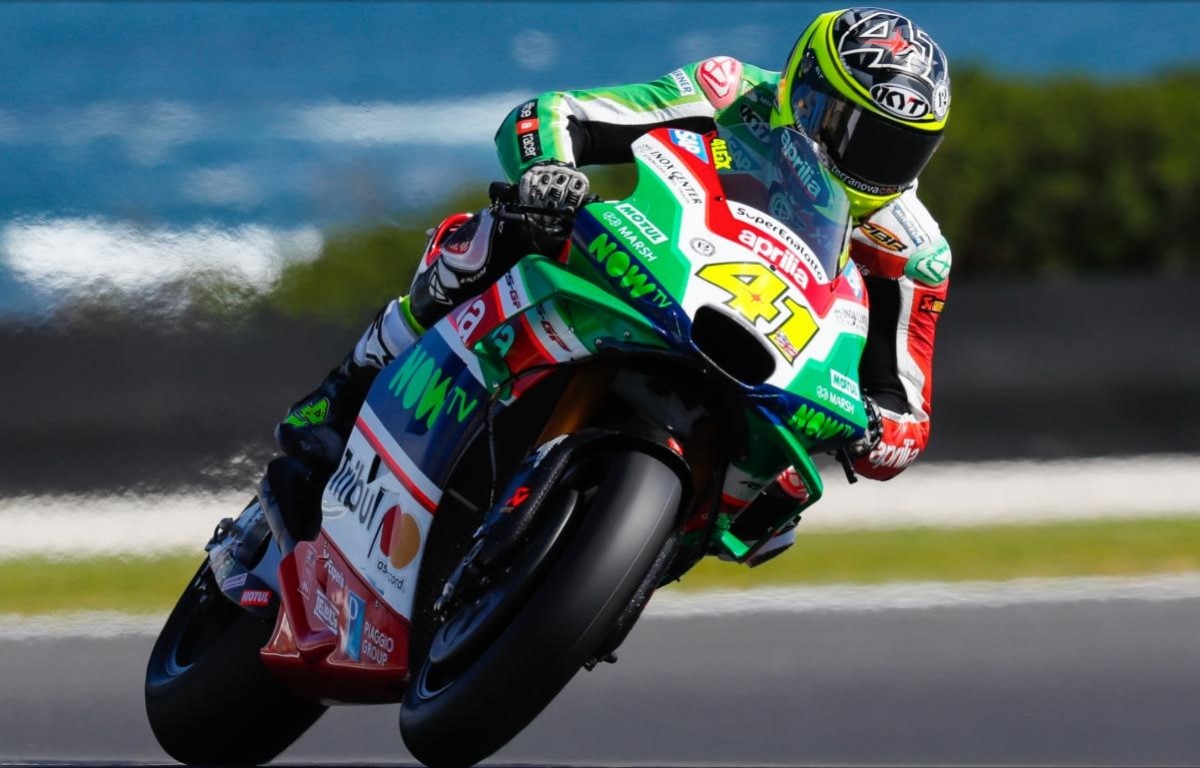 Aleix Espargaro (Aprilia Racing Team Gresini) went quickest on Day 1 of the Michelin Australian Motorcycle Grand Prix, mastering Phillip Island in FP2 to head the timesheets ahead of reigning Champion and points leader Marc Marquez (Repsol Honda Team) – but not by much. It was only 0.005 seconds splitting the two men, with Marquez’ key title rival Andrea Dovizioso (Ducati Team) in third and still within a tenth. The top on Day 1 was anything but lonely.

The Aprilia Racing Team Gresini rider was quickest, ahead of Marquez and Dovizioso as 16 riders were separated by less than one second

Weather on Day 1 was sunny and fair but with some wind giving pause for thought, and the forecast for Saturday remains a worry for some – with temperatures looking set to fall. That made for some good squabbling for position, with a real chance that FP1 and FP2 combined timesheets may decide direct entry to Q2 should FP3 not give the field a chance to improve their times.

Behind the top three, last year’s winner at the Island Cal Crutchlow (LCR Honda) was fourth fastest after moving up the timesheets in FP2 to get in the mix at the front, ahead of Maverick Vinales (Movistar Yamaha MotoGP). Vinales, who topped testing at the venue in preseason, also suffered a crash in the afternoon as he slid off at Turn 8 – rider ok.

Jack Miller (EG 0,0 Marc VDS) impressed in the morning and again in the afternoon as he rides at home and only three weeks after breaking his leg in a training accident. The rider from Townsville put his Honda in sixth, and was a fitting 0.043 off Vinales ahead of him. Andrea Iannone (Team Suzuki Ecstar) was another who enjoyed a notable Friday, with the Italian’s P4 at Motegi giving him a boost and Day 1 of the Australian GP seeing the former podium finisher at the venue put himself in seventh.

Johann Zarco (Monster Yamah Tech 3) had a solid start to the Australian GP in eighth, with the Frenchman gunning for the Rookie of the Year title and, with the absence of teammate Jonas Folger, needing only a top six finish to complete the task on Sunday. Dani Pedrosa (Repsol Honda Team) was ninth quickest, and was back nearer the front following a tough Japanese GP.

The next three names on the timesheets made some headlines, as Pol Espargaro (Red Bull KTM Factory Racing) went a tenth quicker in the afternoon to take P10, leaving both Jorge Lorenzo (Ducati Team) and Valentino Rossi (Movistar Yamaha MotoGP) in eleventh and twelfth respectively. That could be a hurdle for the two multiple World Champions as the weather remains in doubt for Saturday, when automatic graduation to Q2 will be finalized.