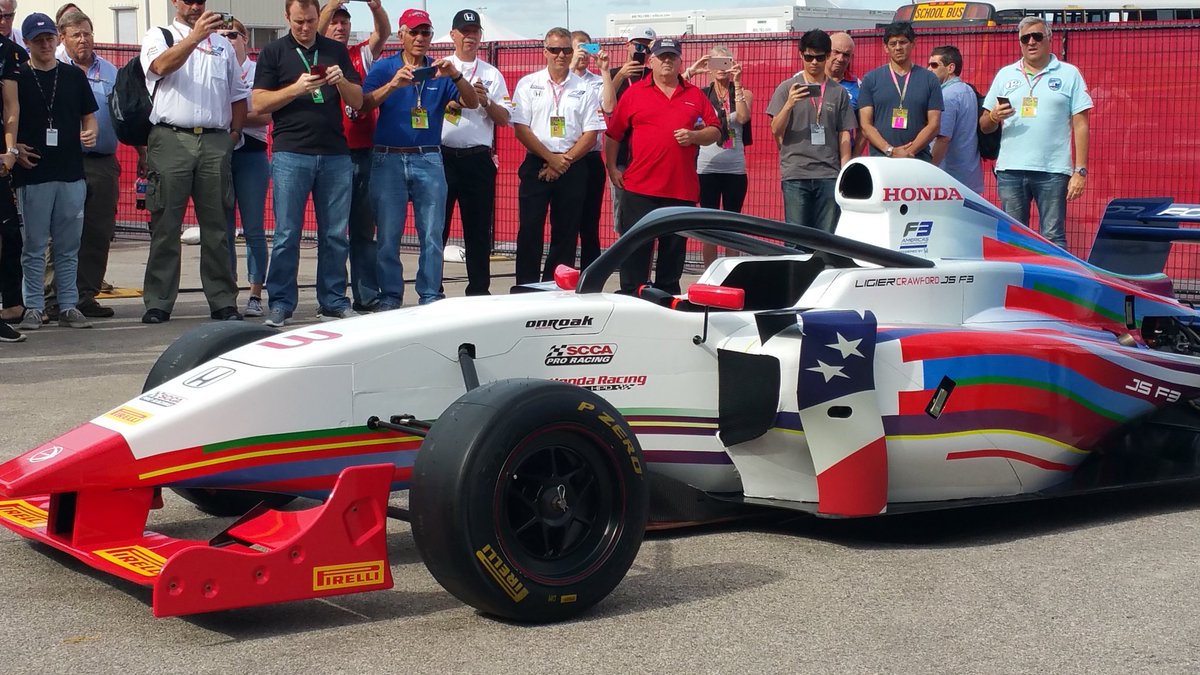 The Formula 3 Americas Championship Powered by Honda today both launched its car and announced its debut race date of April 27, 2018.

This will be on the same weekend card as the F4 U.S. Championship and Pirelli World Challenge at VIRginia International Raceway in Alton, Va.

As announced last month, Onroak Automotive has been selected by the FIA and the SCCA Pro Racing, organizer of the F4 U.S. Championship and of the future F3 Americas Championship, as the official and exclusive chassis constructor of the F3 in the United States. Designed and produced in the Onroak Automotive workshops in North Carolina, the Ligier Crawford JS F3 has been unveiled at the last round of the 2017 F4 U.S. Championship, during the Formula 1 US GP event, on the Circuit of the Americas.

Mainly known as a manufacturer of a range of sports prototypes, Onroak Automotive also proposes single-seaters, after taking over the Crawford Composites F4 program just one year ago. Designed and produced in the manufacturer American base in North Carolina under Max Crawford’s management, the car was called the Crawford F4 in 2016 and 2017.

It will be renamed the Ligier Crawford JS F4 for the 2018 season and will remain the exclusive model of the F4 U.S. Championship, powered by a Honda engine and shod with Pirelli tires.
As is the case with its range of sports prototypes, which enables teams and drivers to move up the endurance pyramid, it is quite natural that Onroak Automotive has turned its attention to Formula 3.

After the announcement of the F3 Americas Championship and the choice by the FIA and the SCCA Pro Racing of Onroak Automotive as the exclusive chassis manufacturer, the Ligier Crawford JS F3 has been unveiled few hours ago at the final round of the F4 U.S. Championship on the Circuit of the Americas, played at the same time as the F1 US Grand Prix. It will be shod with Pirelli tires and powered by a Honda 2-liter engine developed by HPD for the F3 Americas Championship.

Thanks to its presence in F4 and F3 Onroak Automotive’s aim is to help young drivers move up the ladder in their career in motor sport.

Max Crawford, Onroak Automotive North America General Manager: "The F3 race series will feature the next generation of all-new FIA race cars, the Ligier Crawford JS F3, designed and manufactured in the United States, at Onroak Automotive North America's headquarters in Denver, North Carolina. The Ligier Crawford JS F3 is the next step up from Onroak Automotive NA's successful F4 car. The ability to design, manufacture and service the cars in the U.S. has always been part of Onroak Automotive NA's commitment to the F3 series. Managed by Andrew Scriven, our design team in Denver, NC, has worked comprehensively with the FIA on implementing all the requirements for the new generation of F3 cars, and this has enabled us to produce the new car at a level of performance and safety that leads the world."