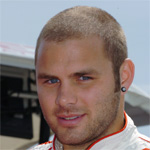 Rumors out of Homestead have IPS driver PJ Chesson from Far Hills, NJ talking to Ron Hemelgarn about a full-time ride in 2006. We hear Gene Simmons, who has taken a liking to PJ, is helping land sponsorship. The team hopes to race the entire season starting with the opening race in Homestead.

In 2004 he earned three consecutive IPS victories at Michigan, Kentucky and Pikes Peak and recorded second-place finishes at Milwaukee and California.