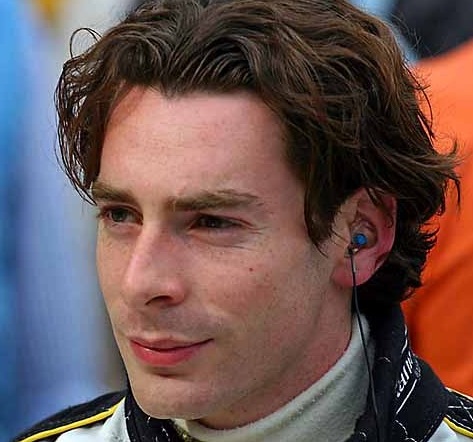 UPDATE This rumor, back from November, is now upgraded to 'fact' today. See Hot News page for announcement.

11/21/05 Since first getting his start karting as a ten year old, Simon Pagenaud has always been quick to find the fastest way around a racetrack. The young French racer has also identified the quickest route to the top in his career as well, as he looks to contest the 2006 Champ Car Atlantic season with the intention of moving up to the Champ Car World Series.

Pagenaud (pictured right), who narrowly missed out on winning the 2004 Formula Renault Eurocup Championship to American Scott Speed, made the step up to run the full World Series by Renault season in 2005, racing at tracks like Monaco, LeMans, Monza, and Donington in the 425-horsepower Renault/Dallara machines and taking three top-fives in the highly competitive category.

The Champ Car Atlantic series will reward the 2006 series champion with a significant $2 million dollar bonus towards a Champ Car campaign, and will also feature a new car/engine combination with a new-design Swift chassis mated to a 300-hp Cosworth.

For Pagenaud, who is managed by former Target Chip Ganassi Champ Car driver and fellow Frenchman Nicolas Minassian, the choice to race in the States is one that comes down to opportunity, and he believes that the Atlantic series can provide that.

“It is difficult in Europe because if you are trying to get to Formula 1, it isn’t just how much talent you have that matters," said Pagenaud. “The new Atlantics package is very appealing to me because there will be a lot of very talented drivers and good teams, so it will be a good place for me to show my skills and learn the tracks."

Pagenaud has had the opportunity to test the current-specification Toyota Atlantic car, getting up to speed quickly with the reigning Toyota Atlantic Champions Condor Motorsports, who were impressed with what they saw.

“Simon provided us with abundant and precise feedback," said Condor team owner and longtime Atlantic entrant Carlos Bobeda. “He worked very well with his engineer and was also very easy on the equipment. His times were very fast right away, and he kept finding more speed every time he went out. Post-test inspection of the car showed a perfectly preserved gearbox, with no traces of overreving. We would love to include Simon in our 2006 driver lineup."

Pagenaud, who also tested with the US Racetronics team and set a quick lap time of 57.3 at Buttonwillow, was impressed with how both teams worked, and is looking forward to getting behind the wheel of the new-specification Atlantics machine.

“The downforce on the car is pretty impressive and you can carry a lot of speed into the corners and I really liked that," said Pagenaud. “Of course, the new car will have a different package, but it was good to get some time to get comfortable with the car and see how the teams work in the States, and I was very impressed."

The success of Sebastien Bourdais has helped to raise the profile of the category in France, and Pagenaud is hoping to use his Atlantic campaign to get the chance to compete against the two-time Champ Car champion in the future.

“Champ Car is my main goal," said Pagenaud. “I love the series. The cars are powerful, and I really like how the races are set right where the people are in the cities, I think it is an excellent environment and with the new car in 2007, it will be even more exciting for the drivers and for the fans. I am looking forward to living in the U.S. and experiencing the American way of life, but I am most focused on winning races and moving up."

Pagenaud is still working to finalize his 2006 Champ Car Atlantics plans, and hopes to make his plans public after the holiday.