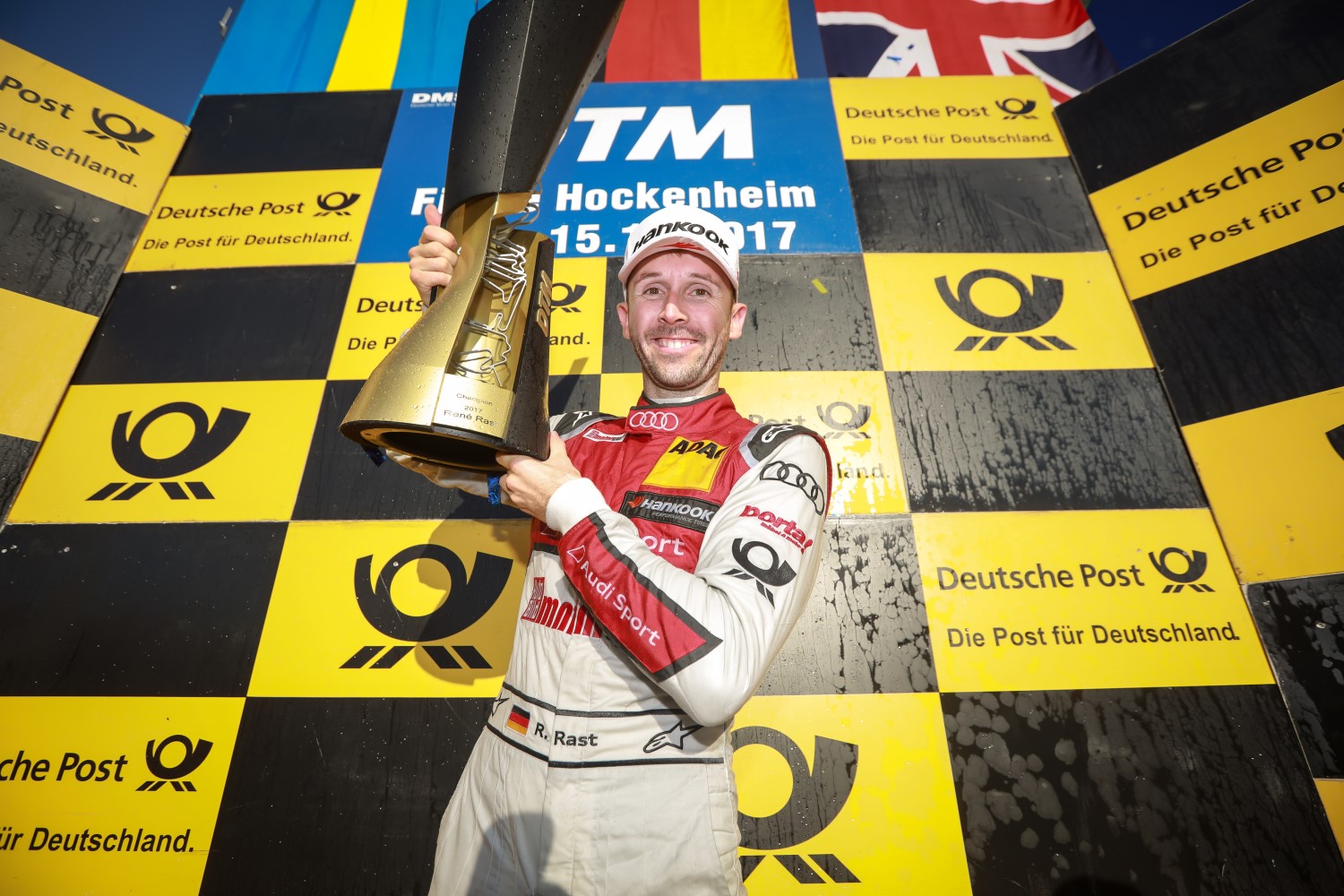 A rookie driver rocks the DTM and wins the title: Rene Rast is the man of the moment and the new DTM champion. In the DTM season finale at the Hockenheimring Baden-WÃ¼rttemberg, the Audi driver crossed the finish line in second place and secured himself the 15 kilograms heavy champion’s trophy in his first full season of racing in the DTM.

Until the final lap, the 30-year-old didn’t know whether he had made it. It was only on the cooling-down lap that the relieving radio call from team principal Arno Zensen came to inform him of his success.

After that, Rast didn’t hold back his emotions and pumped his fists in the air to express his joy over and over again.

“I can’t yet put this into words," Rast said at the finish. “It is all still so far away. An incredibly emotional moment and the best day in my life."

Outgoing champion Marco Wittmann concluded the DTM season with a victory. In the finale, the BMW driver secured his maiden win of the season and the ninth of his DTM career.

“Every driver wants a victory in the final race," the outgoing champion said. Mike Rockenfeller, who also had mathematical chances of winning the title, rounded out the podium by finishing third. Gary Paffett came fourth with his Mercedes-AMG C 63 DTM.

For Rast, the road to the title was a rough and rocky one. He messed up the start, lost three positions on the opening lap and dropped back to fifth place. Rast then had his hands on the champion’s trophy for the first time on lap five as he overtook Robert Wickens for fifth place while his direct rivals in the battle for the title, Mattias Ekstrom and Jamie Green, were outside the point-scoring positions at that time.

Due to penalties incurred in the race on Saturday, both drivers had started the final race at a disadvantage: Green had been dropped ten, Ekstrom five places on the starting grid. In the course of the race, Green and Ekstrom were able to make their way up to fifth and eighth place respectively, but that wasn’t enough to keep Rast from wrapping up the title.

Mike Rockenfeller also did everything to remain in contention, but the 33-year-old would have had to win. With the 18 points for second place, Rast brought his total to 179 points. Next up are Ekstrom (176 points), Green (173 points) and Rockenfeller (167 points).

DTM finale a festival for the fans

The outing of the SUPER GT cars from Japan, who completed demonstration laps on Saturday and Sunday together with the DTM cars from Audi, BMW and Mercedes-AMG, left a lasting impression from the future. The Lexus LC500 and the Nissan Nismo GT-R, together with the DTM race cars, provided spectacular sights and a great sound for the fans at the Hockenheimring.

“Thus, we have made the co-operation tangible. They are fascinating race cars. The sound of the four-cylinder engines is great. Initially, I was sceptical, but now, we know: the DTM cars of the future will have a great racing sound," Gerhard Berger said.

Not only from a sporting perspective, the DTM finale had everything in store to stir the motorsport fans’ blood. Another highlight was the concert by German band ‘Die Fantastischen Vier’ on Saturday evening, who fascinated the DTM fans with the hits from the band history of over 25 years.