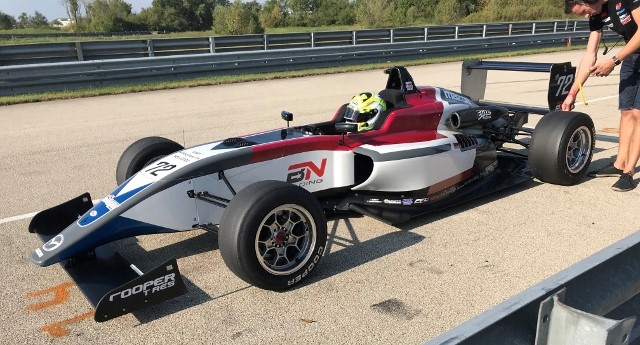 Four candidates for this year’s Team USA Scholarships recently gained a taste for what may lie in their future when Bryn Nuttall of BN Racing granted them an opportunity to sample a Tatuus-Mazda USF-17 at the Autobahn Country Club in Joliet, Ill.

All were impressed by the Tatuus, which has provided some spectacular action – and numerous lap records – since being introduced this year to the Cooper Tires USF2000 Championship Powered by Mazda. USF2000 represents the first step on the highly acclaimed Mazda Road to Indy Presented by Cooper Tires open-wheel development ladder, which offers scholarships for drivers to progress from the grassroots of the sport through USF2000, Pro Mazda and Indy Lights Presented by Cooper Tires to the Verizon IndyCar Series and the Indianapolis 500. One of last year’s Team USA Scholarship winners, Oliver Askew, went on to claim this year’s USF2000 title, earning a Mazda Scholarship worth $325,000 to advance into Pro Mazda in 2018.

“This was my first time behind the wheel of a USF-17 and I had a great time," said karting standout Kotyk, a leading contender in the F1600 Championship Series in his first year of car racing. “BN Racing is a professional team with a talented group of engineers and coaches. It was an excellent day and have taken a lot of knowledge from it which will help me into the future."

“I was very impressed with BN Racing and the whole experience," added Loomis, who is contesting this year’s Formula 4 U.S. Championship powered by Honda. “Bryn’s car was fantastic – probably one of the best cars I’ve had the opportunity to drive. Overall, I am so thankful for this opportunity."

“This opportunity means the world to me," said Jeansonne, who this year is gaining his first experience in the sport with the Lucas Oil School of Racing. “Bryn was very welcoming and I found him to be very easy to relate to, and to have the chance to learn from Victor was something I didn't take for granted. I took in a ton of information in a very short amount of time. I'm itching to get another chance at a proper racing car again and apply what I've learned throughout the day."

“My intro to the new USF2000 car was an incredible experience," said Cook, a former karting standout who has made the step into car racing while at the same time pursuing a mechanical engineering degree. “I felt comfortable and confident in the car relatively quickly thanks to Team BN's help and guidance. Driving a carbon fiber monocoque for the first time gave a unique feeling in the car and it was really exciting from an engineering perspective. Having Victor Franzoni and Luke Varley there to help me prepare and utilize my time in the car effectively was a huge help. I cannot thank Team USA, Jeremy Shaw, and Bryn Nuttall enough for the opportunity. I'm certainly hungry for more seat time in the near future!"

BN Racing has made quite an impression during its debut USF2000 campaign, guiding rookie David Malukas to a pole position and four top-six finishes, as well as 10th place in the final point standings despite contesting only eight of the 14 races.

“I concur in offering my sincere thanks to Bryn Nuttall and everyone at BN Racing for creating such a memorable opportunity for our drivers," said Team USA Scholarship Founder and President Jeremy Shaw. “Making a final decision on who will be representing our program this year has been especially difficult, but I expect to make the announcement very soon."