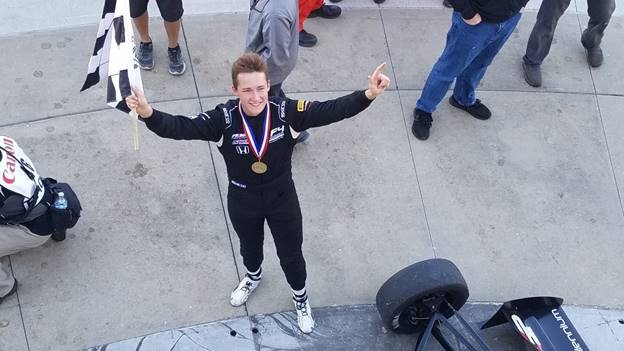 “All the F4 U.S. guys raced phenomenally this week in Indy," said SCCA Ventures Board of Directors President Dan Helman. “So much exposure comes with winning a Runoffs and the extra seat time they get here and during club-racing events benefits their professional racing craft."

After one aborted start attempt caused by formation issues, McCusker took the green on Lap 2 from pole-position for the lead in the Formula Continental class and maintained his P1 standing throughout the 19-lap race to win his Runoffs debut.

“It was an exciting race and an amazing feeling winning at the SCCA Runoffs, especially at Indy on my debut weekend," McCusker said. “Passing the bricks first and standing on top of the podium is a moment I will always remember. I have to thank everyone at Company Motorsports and Dot Works for getting me to the weekend so last minute. Everyone did a really great job."

Finlayson went flag-to-flag to clinch his first national championship in the Formula Enterprises class, finishing the 19-lap race nearly 13 seconds ahead of second-place.

“I am trying to soak it all in," Finlayson laughed as he pointed to his champagne-soaked race suit. “Winning my first SCCA National Championship Runoffs is a big accomplishment. We had a lot of good results in our region and to cap-off my season with a win here at Indy is a great way to end my rookie FE season."

Finlayson was challenged only once the entire FE race. Sitting on pole, he got the jump on front-row contender and F4 U.S. pilot Flinn Lazier of Vail, Colorado. The third-generation racer tried to insert his nose on the inside of Finlayson’s machine in Turn 1, but Finlayson shut the door on Lazier, pulling a full car-length in front. From that point on, Finlayson commanded the race capitalizing on his lead every lap. Lazier’s battle for second ended after mechanical issued left him stranded trackside.

“It was truly great to be back racing at IMS for the third time this year," Lazier said. “My car was set up to have an explosive finish. It was the smartest set up with the best minds working on the car all week. My run for first ended from a broken throttle body before I could really show what my Comprent Motorsports car could do, but that’s racing. My week was truly magical because I had so much support from Comprent Motorsports, Primus Racing, Bell Helmets and StalkIt. I have so much respect for the volunteers and SCCA workers that made this a very successful week. Thank you."

Jacob Loomis of Corinth, Colorado, also competed at the SCCA National Championship Runoffs. Driving in a 72-car field, Loomis started from 26th, charging quickly to the top-10. However, after incidental contact with another driver and only six laps left in the race, Loomis’ podium run was cut short.

“It was a bit disappointing not to be able to finish the race," Loomis said. “I’m grateful for the opportunity Snyder Brothers Racing gave me and I wanted to give them at least a top-10 finish. Indy is a great place with a great atmosphere and not too many people can say they had the chance to race here twice in one year. I’m thankful for that."

Twenty-eight classes with nearly 1,000 entries, the largest in club history, participated in the 2017 SCCA National Championship Runoffs. Fans can view full results from the weekend at SCCA.com.