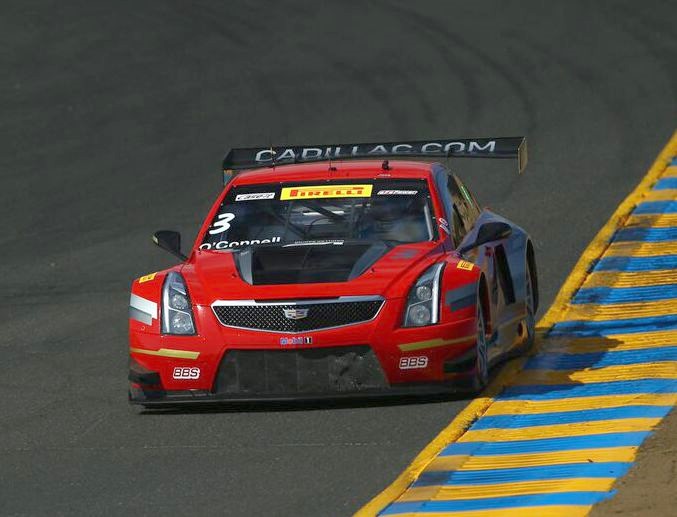 Cadillac will place its championship-winning Pirelli World Challenge V-Performance Racing GT team into hibernation, following a September sweep of the GT class at the season-finale double header at Sonoma Raceway.

Since the team first assembled in 2004 to take the first-ever Cadillac CTS-V Sedan sprint racing against the toughest GT competition around, it has amassed 33 wins, 121 podium finishes (including the wins), and 25 pole positions. As a team, Cadillac competed in 332 races across eleven years of competition.

"Throughout 11 years of competition with Cadillac Racing in the Pirelli World Challenge Series, we have taken tremendous pride in our successes, including 33 wins, 121 podium finishes and multiple manufacturer and driver's championships," said Mark Kent, Director of Motorsports Competition for Cadillac Racing. "We also have taken tremendous pride in the level of technology transfer that has occurred between the Cadillacs competing on track and their showroom counterparts. This technology transfer has helped make the Cadillac ATS-V and CTS-V production models very track-capable and athletic."

"Cadillac road cars are better than ever thanks to racing with World Challenge," said Rich Brekus, Global Director of Product Strategy for Cadillac. "Equally importantly, the Cadillac Racing GT Team has earned the enthusiasm of thousands of fans around the world. You will see Cadillac Racing t-shirts in the crowd at LeMans each year, thanks to the GT program. The team has provided excellent representation on and off the track, and perfectly reflects the core of passion in our brand. The drivers and crew have been true ambassadors as we introduced Cadillac V-Performance to the marketplace. In 2018, we will take a pause in Pirelli World Challenge as we focus completely on our effort in prototype sports car racing. However, we maintain a regular and open communication with Greg Gill, the World Challenge CEO, and hope to one day return to the Series in some form."

Finishing in style befitting Cadillac, Michael Cooper punctuated the success of the Cadillac Racing GT program by winning both of the season-ending races at Sonoma Raceway in the Vector Blue No. 8 Cadillac ATS-V.R Coupe on September 16th and 17th.

In the program's second and third chapters, rebuilding after the 2008-10 stand down for the Great Recession, the team's most competitive streak occurred from 2012-15 when Johnny O'Connell earned four consecutive driver championships. Three of those were secured in the mighty Cadillac CTS-V.R Coupe and one in today's GT3-homologated Cadillac ATS-V.R Coupe. In the same period, O'Connell posted 13 wins in the CTS-V.R and five in the ATS-V.R.

In His Words: Johnny O'Connell, No. 3 Cadillac CTS-V.R and ATS-V.R

"Having won four championships in seven years, I naturally have lots of amazing memories that Cadillac Racing achieved as a team," O'Connell said. "No championship was easy, and all but one came down to the last race. I remember the race in Houston, when Audi brought in Rene Rast to try to help win the championship. Needing a win for our Cadillac CTS-V.R, on a drying track we took the lead with two laps to go and wound up champions. That was special.

"With the Cadillac ATS-V.R Coupe, in 2015, we burned a car to the ground at Barber then two weeks later won both races at Canadian Tire Motorsport Park in the spare car that the team worked 24 hour days getting ready. We were successful because of everyone on the team and within Cadillac. The Cadillac leadership of Mark Reuss, Johan DeNysschen, Jim Campbell, and Mark Kent provided the team with the tools needed to excel against the world's top brands. The Cadillac Marketing team utilized our success on the track to promote and educate the world about the athleticism that is Cadillac and its V-Series.

"Our program managers Dave Leone, David Spitzer, David Caldwell, and Laura Klauser took what we learned on the track and built it into the production cars, in addition to serving as our representatives with World Challenge management.

"Finally, the day to day leadership of team manager Steve Cole; one of the best I've ever had the pleasure to work with. The entire team at Cadillac Racing and Pratt and Miller. Each trophy, win and championship was the result of a collective effort. Sad to see the program take a break, grateful for all we achieved."

Michael Cooper closed this chapter on Cadillac in the World Challenge Series by winning the final two races at Sonoma Raceway. He and Jordan Taylor combined to win the 2017 SprintX GT championship. Cooper posted five wins in his two-year tenure with the team.

In His Words: Michael Cooper, No. 8 Cadillac ATS-V.R

"My best memory with Cadillac Racing has to be the double win at Sonoma to close out the 2017 season," Cooper said. "In the final race of the season, starting from the outside of the front row, I was able to make a move into the lead. For the rest of the race I would have to hold off a charging Patrick Long to bring home the victory, which I was able to do. I was extremely proud to give all of the people in the team one final win. It was an incredible run to end the era of Cadillac Racing's ATS-V.R in Pirelli World Challenge."

Recollections from the Cadillac Driver Hall of Fame: Names You Recognize

One of the most memorable races was Cadillac's first event, at Sebring in 2004. Andy Pilgrim lined-up for the start in second, next to teammate and pole sitter Max "the Axe" Angelelli. Pilgrim's Cadillac CTS-V.R stalled. By the time he got it re-fired the field was into Turn 2. He was able to drive back through the competition and finish second behind Angelelli, giving the brand its first 1-2 finish in its first outing.

"One of my fondest memories of racing with Cadillac was the first race at Sebring in 2004," Pilgrim said. "I realized my car had a dragging clutch before the standing start, so I chose to switch it off before the green flag and wait. After the green flag waved, I was thankfully not hit by any of the 50 cars behind me as they flew by. Realizing I had the dragging clutch meant I would have to somehow get the car rolling on the starter motor to have any chance of getting into the race. The start line at Sebring is on a totally flat piece of concrete, so I put the car in gear, then rolled it on the starter motor. As it was rolling, I quickly knocked it into neutral and fired up the engine. I then tried to bang it in second gear without the clutch, while still rolling. On the third try it worked and off I went. The rest of the race ended up in the history books as Max Angelelli won and I ended up in second place. A close second was winning the first championship for Cadillac in 2005. It was very special, especially doing it against such a strong, deep field."

Max "the Axe" Angelelli holds the distinction of debuting two Cadillac race cars and winning in their first outings. In 2004 Max won at Sebring in the Cadillac CTS-V.R Sedan and this year he was a part of the Konica Minolta team that won the Rolex 24 At Daytona in the first-ever competition outing for the all-new Cadillac DPi-V.R prototype.

"It is difficult to isolate one specific memory as I've had so many," said Angelelli. "But as you can imagine, the Sebring race win was special and if you think that I repeated that this year, debut a car and win the race, both times in a Cadillac and both times at an iconic venue, that was special. The team always made me feel at home. We had a great time and one of the best was at Road Atlanta in 2004 where I had to race with only one gear. I managed to finish third, a good day for manufacturer points. At the podium ceremony, I'd made a bet with my car engineer, Lynn Bishop, that he couldn't drink the entire bottle of champagne in one go, and he did it!"

Canadian racing legend Ron Fellows drove the Cadillac CTS-V.R to two race wins posting one of the most significant early wins for the team at Long Beach in 2006.

"Getting the opportunity to race at my home track, Canadian Tire Motorsport Park, in the early days of the Cadillac racing program is a special memory," Fellows said. "I was able to get one of the first wins for the program at my home track so that stands out. Another one was at Long Beach. Racing through the streets of Long Beach is always fun. I was in a battle up until the end of the race. The Cadillac didn't have the highest straight-line speed, but we handled and cornered really well. With two turns to go on the last lap I got a nice run on the Viper and passed him on the outside for the win at the end of the long back straight. Getting any kind of win at Long Beach is a big deal; that one in the Cadillac was fun."

Lawson Aschenbach drove the CTS-V.R in 2007 and posted an important win at Road Atlanta to go along with six podium finishes.

"My fondest memory with Cadillac Racing was my first win in the rain at Road Atlanta," Aschenbach said. "Tough conditions and intense battles with my teammate, Ron Fellows, made for a great race. We had a year full of podiums, but lacked that all-important win. It was a proud moment and one of the biggest accomplishments in my career. The first time I drove the CTS-V.R I was blown away by the handling and drivability. Not only did the racecar look good, it sounded awesome with that throaty V-8. It was also my first time working with Pratt & Miller, and I was impressed by the professionalism and dedication to win. Everything about the program showcased excellence, a word that embodies the brand."

For 2018, Cadillac will continues the on-track success in the IMSA WeatherTech Championship with its three Cadillac DPi-V.R race cars campaigned by Wayne Taylor Racing and Action Express Racing. Ricky and Jordan Taylor, in the No. 10 Konica Minolta Cadillac DPi-V.R, lead the championship going into the final event Petit Le Mans at Road Atlanta next week. The brothers must take the start and one driver must complete 45-minutes of driving to win the Driver and Manufacturer championships for Cadillac.