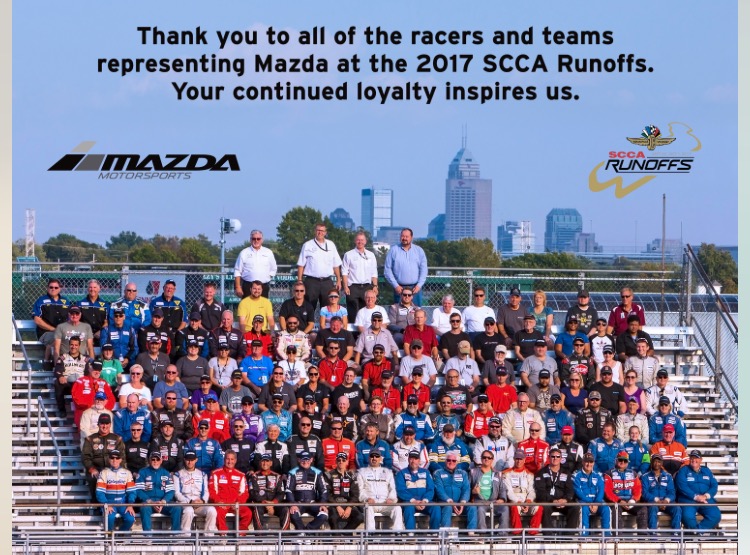 The 2017 SCCA Runoffs will be one for the ages. With almost 1,000 entries across 28 classes, many records will be eclipsed. Among the entries are approximately 300 Mazda-powered race cars, more than any other brand competing. Since 1977, Mazda racers have won 91 SCCA Runoffs Championships.

“The Indianapolis Motor Speedway is a bucket list track for every racer so it’s no surprise that the entry lists are so strong," said David Cook, business development manager, Mazda Motorsports. “We expect Mazda racers to challenge for wins in almost a dozen classes during a week of competition. It’s also quite possible, we’ll see a Mazda Road to 24 or Mazda Road to Indy shootout winner emerge from Indy."

Practice and qualifying has already begun, while the races will take place over three days, September 29-October 1.

The 300 Mazda racers, and their mostly family and friends teams comprise a number of interesting stories. They include:

It pays to race a Mazda: While club racing does not typically pay prize money, Mazda racers can earn Mazda paid contingency awards of up to $5000 for a class win at the Runoffs. Mazda also has a “tow fund" to assist racers with the travel costs associated with getting to the Runoffs. In addition, Mazda champions at the SCCA Runoffs can qualify for the Mazda Road to 24 or Mazda Road to Indy Shootout, where large scholarships are awarded.

Past Champions: Among the past Mazda champions competing in this years’ Runoffs are:

Prather and Rettich are both seeking to become the first Mazda racer with four SCCA Runoffs titles.

Racing Spouses: While the racing world has a great number of family-teams, having husbands and wives both driving in the same event, competing against each other, is unique. This year, there are two happily married racing couples: John and Dinah Weisberg along with Whitfield Gregg / Amy Mills.

It’s not just a boys club: Among the many women racing at the Runoffs are Mazda racers Sabre Cook, Amy Mills, Cherie Storms, and Dinah Weisberg.

Autocross Success: A year ago, Julian Garfield was a top Mazda competitor in the SCCA Solo world. Julian was invited to the 2016 Mazda Road to 24 Shootout where he earned a special scholarship to compete in Spec Miata. When not racing, Julian is an engineering student at the University of Kansas where he is a member of their Formula SAE team.

Across the country: This event draws the best club racers from all parts. Mazda racers entered at the Runoffs are from over 30 different states, and Canada.

Win On Sunday Sell On Monday – Mazda Style: Two Mazda racers will be hoping to take their trophies to work when they return to the Mazda retail world after the races. Taz Harvey (RX-8 in GT-2), owns Dublin Mazda in Dublin, California, while Danny Bender (Spec Miata) is one of the top Mazda sales associates in the country, working at Autobarn Mazda in Evanston, Illinois.

Mr. Old School (1): The ageless Jim Downing, the name for Mazda IMSA fans for over 40 years, is entered in his Mazda-powered Peach Day 02 in the Prototype 1 class.

Mr. Old School (2): Aaron Downey may have the favorite car of the Zoom-Zoom nation. Aaron races a 1976 Mazda RX-3 in E-Production. This year he is even running car #50 in celebration of the 50th anniversary of the Mazda rotary.

Mazda Motorsports boasts the most comprehensive auto racing development ladder system of any auto manufacturer in the world. The Mazda Road to 24 program offers a number of scholarships to advance drivers up the sports car racing ladder, beginning with the Global MX-5 Cup series and culminating with the Mazda Prototype team. The Mazda Road to Indy is a similar program that includes Mazda-powered categories of USF2000, Pro Mazda and Indy Lights. In grassroots road racing, more Mazdas race on any given weekend in North America than any other manufacturer. Mazda is also the title sponsor of the renowned Mazda Raceway Laguna Seca in Monterey, California. Follow all of the latest news at MazdaMotorsports.com, @MazdaRacing on Twitter, and MazdaMotorsports on Instagram and Facebook.