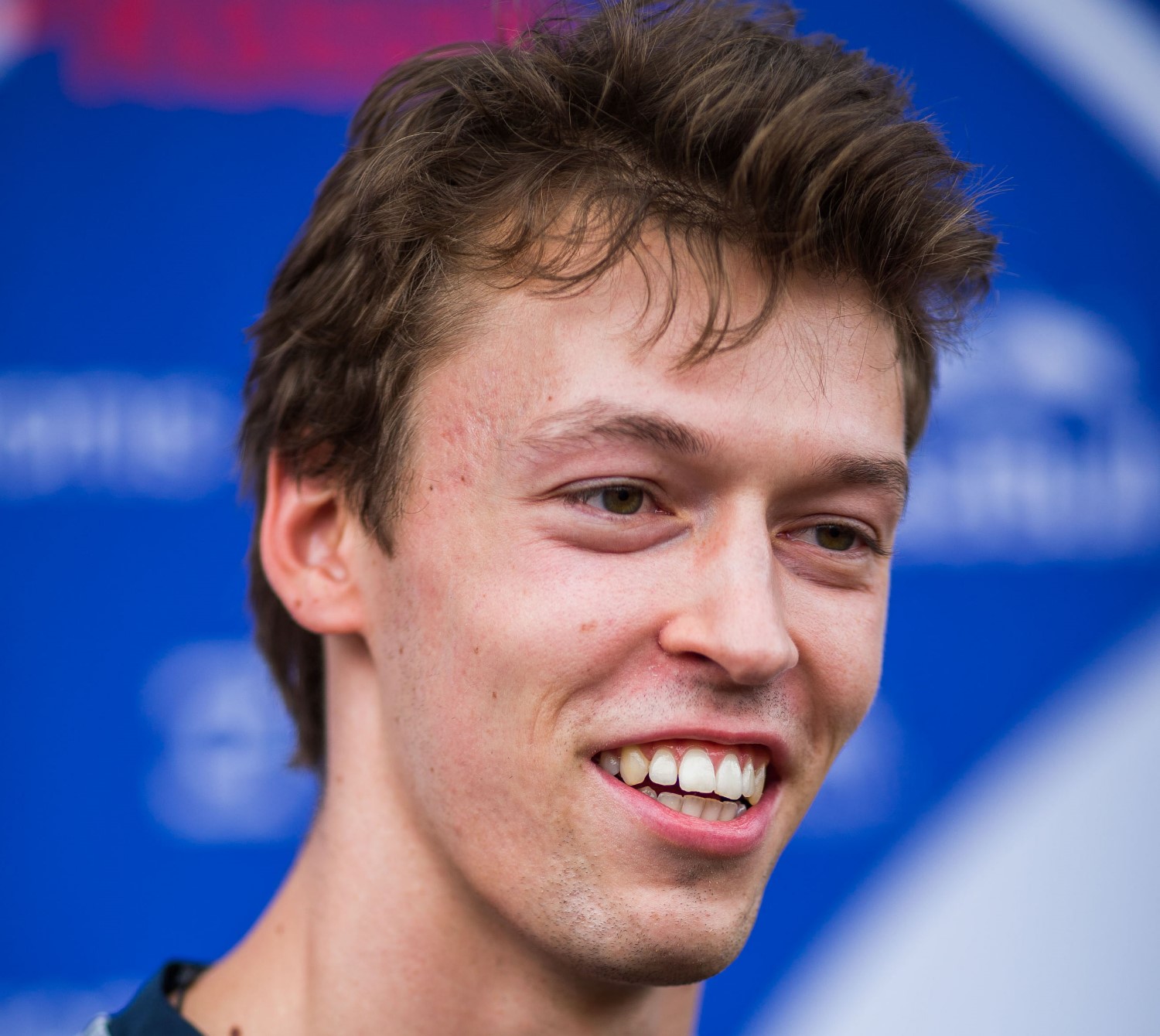 Sponsor says Kvyat out for 'two races only'
(GMM) A Toro Rosso sponsor says Daniil Kvyat could be back in the car in a month.

The junior Red Bull team has announced that Kvyat has been sidelined for "the next grands prix" to make way for young Frenchman Pierre Gasly.

"The driver switch gives us an opportunity to make a more informed decision regarding our 2018 driver choices," said boss Franz Tost.

He added that Russian Kvyat has made "mistakes of his own making" in 2017, "which is why we are standing him down for the next races".

But Toro Rosso clarified in a statement that the 23-year-old "remains part of the Red Bull family".

Some, however, think Kvyat is obviously actually the latest victim of the Red Bull axe, and will never return to formula one.

Toro Rosso sponsor Acronis' chief Serguei Beloussov insisted: "He is just out for two races while Gasly is tested.

"(Carlos) Sainz is still leaving, so next season is still open," he added.

Indeed, Gasly is in the running to win Japan's Super Formula championship, whose finale clashes with the US grand prix next month.

Igor Ermilin, president of the Russian automobile federation, told Tass news agency: "Given the move to Honda engines next year, they can afford to experiment with the drivers.

"So I think missing those two races will not affect Daniil or the team in any way. I don't think even they have decided what will happen next," he added.

(GMM) Former Sauber driver Felipe Nasr says he wants to get back to racing next year.

The Brazilian contested two seasons with the Swiss team until the end of last year, when his backer Banco do Brasil pulled out of the sport.

Since then, the 25-year-old has been testing several cars.

"I tested the IMSA prototype, I had some contact with some Formula E teams, I did some simulators, and I was also at IndyCar at the Watkins Glen round in New York," Nasr told Globo.

He said he was invited to the IndyCar round by Helio Castroneves.

"He put me in touch with a lot of people in Indy," Nasr revealed, amid rumors he could test an IndyCar next month.

"Regardless of the category, I think I have the quality to be in a competitive team next year," he said.

And Nasr also revealed that his manager, Steve Robertson – who also handles Kimi Raikkonen's career – has been in touch with some F1 teams.

But he admits that a return to F1 will be difficult.

"Either you're linked to an automaker right from the start or you need to take an investment to get into the other teams," Nasr said.

"The moment that our country is going through also does not help. Realistically, no one is investing in anything."

(GMM) F1 teams are surprised about the high cost of the controversial 'Halo' safety devices that are mandatory for 2018.

Although unpopular among many drivers, fans and insiders, the partial cockpit cover must be fitted to every car from next year.

Germany's Auto Motor und Sport reports that, at present, three external companies have applied to the FIA to be able to supply Halo to the teams.

"Those who meet the requirements can then sell Halo to F1, Formula 2 and Formula E teams," the magazine claims.

But a big issue will be price, with insiders reporting that a single Halo will cost somewhere between EUR 13,000 and 24,000.

"We not only have to order Halos for the cars, but also for the FIA load tests."

McLaren Formula 1 Exec Dir Zak Brown said that the team "would be open to compromise on the special payment it receives as part of an overhaul" of F1's revenue distribution, according to Lawrence Barretto of AUTOSPORT.

Ferrari, Mercedes, Red Bull and McLaren have all agreed to deals for constructors' championship bonus payments from the commercial rights holder.

Ferrari "also gets a long-standing payment while Mercedes, Red Bull and Williams get additional payments."

Brown said that McLaren backs the idea of a budget cap "to level the playing field, even if that means it may have to give up its bonus payment."

He said, "Speaking for McLaren, we're a fan of budget caps. We think it's important. Most other sports have it and it will equal the playing field. And we recognize that means we're one of the four teams that get special payments, [and] that might mean some compromise — but we feel if the sport is healthier ultimately that will benefit all of us." AUTOSPORT

Gasly chooses 10 as permanent F1 number
Toro Rosso driver Pierre Gasly has selected 10 as his permanent race number in Formula 1, ahead of his debut at the Malaysian Grand Prix.

Toro Rosso confirmed on Tuesday that reigning GP2 champion Gasly will graduate to Formula 1 with the team at Sepang, in place of Daniil Kvyat, and is set to remain in the STR12 for the Suzuka round.

Under Formula 1 regulations introduced in 2014, drivers are free to choose a number between 2 and 99 to carry throughout their career, with 1 reserved for the reigning champion.

Gasly has chosen 10, the number previously raced by Kamui Kobayashi during his final year in Formula 1 with Caterham in 2014.

A driver's number is protected for two years after their most recent race, meaning that 10 became available in 2017, and it has now been selected by Gasly.

Gasly raced with 10 during his title-winning Eurocup Formula Renault 2.0 campaign with Tech 1 in 2013.

Gasly feels 'as ready as I can be' for F1

Pierre Gasly says he feels "as ready as I can be" as he prepares to make his Formula 1 debut with Toro Rosso at the Malaysian Grand Prix.

Red Bull-backed Gasly will partner Carlos Sainz Jr. at Sepang, and is set to continue at Suzuka, with Daniil Kvyat being "stood down" amid a challenging season.

Gasly, who joined Red Bull's young driver program in 2014, won the GP2 title in 2016 and is in contention for this year's Super Formula crown.

He is expected to vacate the STR seat at the US Grand Prix, which clashes with the Super Formula finale, but is relishing the opportunity to make his F1 debut this weekend.

"I would like to thank everyone who has helped me get this chance in my motor racing career and specifically, Red Bull, Dr. Helmut Marko and Scuderia Toro Rosso," said Gasly.

"This is a great opportunity for me.

"I feel as ready as I can be, having had to be prepared for anything in my role as Red Bull Racing's third driver this year.

"I will do my best to perform well with Scuderia Toro Rosso during these coming races."

Gasly has made several F1 test outings with Red Bull and Toro Rosso.

Pirelli will bring its Super Soft, Soft and Medium compounds to Suzuka, the same as in China, Bahrain, Azerbaijan, Britain, Hungary, Italy and Malaysia, and also selected for Brazil.

Red Bull drivers Daniel Ricciardo and Max Verstappen have both selected nine sets of Super Softs, two more than their Mercedes and Ferrari counterparts, who will take more Softs.

McLaren has picked even more Super Softs, with 10 sets per driver.

Overall, Super Soft selections range from seven to 10 sets, Softs from two to five sets and Mediums from one to three sets, with most drivers only taking the mandatory set.

As usual, drivers were free to choose 10 out of 13 compounds; a set of Super Softs will be held for Q3, and a set of Softs and Mediums for the race (one of which must be used).